Jane Seymour was Henry VIII's third wife and is consider the most boring of all six. However, was she actually the smartest of all by being traditionally English?

Jane Seymour was the third wife of Henry VIII of England and the only one to provide him with the heir he needed at the time. She died when Prince Edward Tudor was just a few days old, presumably from childbed fever, and was buried in a tomb that Henry was building for himself. His show of affection was a sign that she was his one and only love.

She is seen by many as the meek and mild of all Henry VIII’s wives and relatively boring. She never argued back, allowed Henry to rule the kingdom as he saw fit and never spoke out against the current state of religion. She allowed Thomas Cromwell to use the money from the Dissolution of the Monasteries as he saw fit; lining the royal coffers. Was she really as boring as people make out? Considering the time, she was the perfect Queen Consort of England.

The Early Life of Jane Seymour

Very little is known about Jane’s early life. In fact, her date of birth isn’t even recorded. Historians believe that she was 29 at the time of her death, since she had 29 women in her precession, as well as Lady Mary Tudor. It was common at the time to mark the age of the person in this way. Yet, the exact date isn’t known.

In fact, very little is recorded about Jane. It is unclear when exactly she attended court. It may have been as early as 1527 or as late as 1532. All that is known is that she served Catherine of Aragon for a short period of time and then became one of Anne Boleyn’s ladies-in-waiting. Like Anne, it was at Court that Henry VIII first laid eyes on his third wife.

Who Was Jane Seymour?

Jane was in no way uneducated but she was not as well educated as Henry VIII’s two previous wives. She had been raised in the more traditional ways for an English woman. She had learnt needlework, how to look after the house and been a good wife. She was everything that an English woman and Queen Consort was expected to be at the time.

However, this is where many people view her as boring. She didn’t have the love of music and the arts that Anne Boleyn did. She didn’t have the fiery personality that either of Henry’s first two wives had. She was meek. She was mild. She was quiet and reserved. She was everything that Henry VIII needed at the time. He had been through one marriage and was currently in another with women who spoke their mind, stood up for themselves and loved to debate. Henry VIII was growing tired of that personality and he needed someone who would simply support him and bear him the son he needed.

Jane was arguably one of Henry VIII's smartest wives. She remained in favour with the King and that helped her family after her death. Her son remained the favourite of Henry VIII's three children--mainly because he was a boy!--and there was never the fear that she would lose her head, like there was with Katherine Parr years later. Her lack of diverse education and the traditional English values that she gained from her mother likely helped her in her marriage to the King of England. 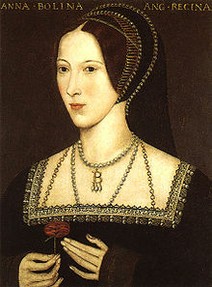 John Russell stated that Jane was the “fairest of all the King’s wives”. The Imperial Ambassador, Eustace Chapuys was reported saying that she wasn’t that beautiful and was pale. This was the traditional English look at the time. She was fair-haired and pale in face; very different from her two predecessors.

She was beautiful in a traditional English way, which not only appealed to Henry but to the whole of the country. She was someone they would be able to accept as Queen Consort of England. While Catherine of Aragon was loved by the English people, the way Henry had ended the marriage caused many rifts and made it difficult for them to accept Anne. While Anne Boleyn was generous, there was always the view that she was a mistress to many of the truly Catholic people. Anne also brought a French style with her and looked more European. Henry now needed someone who would appeal to the English people and would not cause problems in the Kingdom.

Jane had a very plain sense of style, another reason she is considered boring. It was traditionally English, unlike Anne who had a French style. Jane removed the French sleeves and hoods that the ladies-in-waiting wore and switched them to a more conservative style. She also changed the colours in her apartments to more lighter and blander ones. They does come across as boring now but in the 16th century it was safe and she was being smart acting this way. It also shows the way that she was raised; in a more traditional sense.

Jane would not become Henry’s mistress. While it is not clear whether she was conniving as Anne, she definitely made it clear that she had to be Queen to have a relationship with him. This may have been something Henry VIII wanted to hear. At this time, Anne was proving that she couldn’t produce the heir she had promised and he was looking for a way out of the marriage.

Henry had sent Jane a letter on the day of Anne’s execution stating that he would come for her when his wife was dead. The two were betrothed on May 20, 1536, just one day after the execution of the Anne Boleyn and then married 10 days later. There was no coronation, though. Henry may have been worried that she couldn’t produce the heir that he needed and didn’t want to make her position too official. Although the stated reason was due to a plague in London at the time.

The marriage was a happy one, though, thanks to Jane’s personality. While meek with Henry, she was stern with her ladies. She had the motto of “bound to obey and serve”. At the same time, she had very Catholic views, which meant that she formed a close friendship with Lady Mary, her step-daughter. This relationship helped bring Henry and his daughter closer together, after such a terrible break during Anne Boleyn’s reign.

The only time Jane found herself in national matters was during the Pilgrimage of Grace when she asked for pardons for those involved. She soon learnt not to ask for anything else when Henry reminded her of the fate Anne suffered for meddling in his affairs, according to some sources in history.

How Much Do You Know About Henry VIII's Six Wives?

Jane quickly found herself with child and gave birth to a healthy boy, Prince Edward Tudor, in October 1537. It was a long labour though and there are reports that Henry VIII ordered for a c-section because he cared more about the baby than his wife. This is very unlikely as a c-section in the 16th century meant immediate death for the mother. Jane survived for around two weeks after the birth of her son.

She wasn’t able to attend the Christening since it was three days after Edward’s birth and she was still unchurched. At first, everything seemed fine but a few days later it was clear that she was unwell. Jane had succumbed to puerperal fever, also known as childbed fever. This was the same infection that killed Henry’s mother, Elizabeth of York.

Childbed fever was extremely common in the middle ages. It happened due to a bacterial infection in the tear that occurred in the perineum or was contracted during childbirth. The hygiene and medical care was just so poor then to help fight against the infection or prevent it from occurring. Some historians believe that she may have died from an infection due to not all the placenta being removed. There is no way of knowing for certain.

Jane Seymour's Death in The Tudors

Henry VIII mourned deeply for the loss of his third wife. She was buried in a tomb he was building for himself and he never married again until 1540. He even wore black for three months as he mourned and was buried when he died nine and a half years later. Some historians state that this was a sign that Henry VIII really loved Jane Seymour but others believe that he loved her because of Edward. Had the child been a girl, it is probable that Jane would never have received the funeral that she did.

If you look at paintings and portraits from 1537 onwards, Jane plays an important role. She is constantly there as the Queen Consort or as a major figure. There are very few books about Henry VIII’s third wife, despite her important role in history. 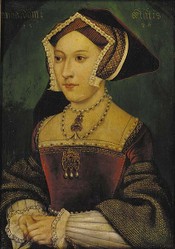