Katherine Parr married Henry VIII in 1543 and survived until after his death. Was this because she was smart or just plain lucky?

Katherine Parr was the sixth and last wife of Henry VIII. In the rhyme “Divorced, beheaded died. Divorced, beheaded, outlived” it would seem like she is the only one to outlive Henry VIII but that isn’t actually true as Anne of Cleves lived longer after Henry. However, Katherine was arguably lucky to keep her head; or she may have just been smart to know how to play Henry VIII.

The Early Life of Katherine Parr 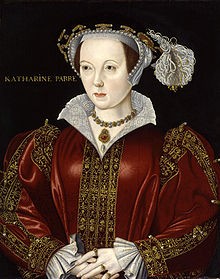 Little is known about Katherine’s birth. The date of birth is put at 1512 but the location is disputed by some historians. There are rumours that Katherine may have been born in Kendal Castle but that was derelict by 1512 and Thomas Parr would not have allowed his wife to give birth there. They were also living at Blackfriars at the time and it would have taken two weeks to get to Kendal Castle. It just isn’t viable for that to be Katherine’s birthplace.

Katherine was the daughter of Thomas Parr, who was a descendent of Edward III, making Katherine and Henry cousins somewhere along the line. It is unknown how many siblings she had but Katherine was the oldest surviving child and only two others are named: Anne and William. Katherine was likely named after Catherine of Aragon, who was her godmother as Katherine’s mother, Maud Green, was serving under her at the time of Katherine’s birth. Thomas Parr was one of Henry VIII’s close companions.

However, Katherine and Henry never met. Thomas and Maud probably thought nothing would come of it. Henry VIII was married to Catherine of Aragon and at the time of her birth it was still in the early years; the trouble of all the miscarriages and stillborn children was only just beginning.

Katherine was very close to her mother. Her father died when she was young and Katherine was raised with very liberal views. She enjoyed learning and had a good education; similar to that of all well-born women at the time. However, she never did enjoy sewing. Her passion was learning various languages.

Katherine Parr: The Most Married Wife of Henry VIII

Katherine was married twice before marrying Henry, making her the most married of all his wives. Both of her husbands died without issue. The first was Edward Borough, who she married in 1529 and died four years later. She was not close to her in-laws as she had managed to pull her husband away from them. Her father-in-law was extremely strict but Katherine would not relent on her liberal views.

Katherine’s second marriage, in 1534, was to John Neville, 3rd Baron Latimer and she inherited the title Lady Latimer. Lord Latimer was a second cousin of her father and was a claimant of the title Earl of Warwick. He fought to regain the title with his brothers but had lost out financially due to this. He also had two children from a previous marriage, Margaret and John.

The problem for Katherine was that her second husband was a devout Catholic. He never supported the divorce of Henry VIII from Catherine of Aragon or his marriage to Anne Boleyn in 1533. In 1536, Katherine’s Protestant views were strengthened after a mob formed outside her home and threatened violence unless Latimer joined them to fight for the return of the Catholic religion. 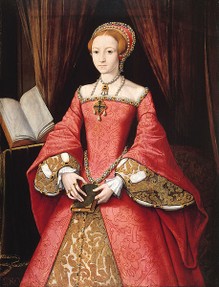 Latimer was dragged away, leaving Katherine to raise her step-children between October 1536 and April 1537. She formed a close bond with them, which arguably helped her with her relationships with her future step-children, Lady Mary, Lady Elizabeth and Prince Edward. She had learnt how to form a close bond despite not being the biological mother. She had organised their schooling to make sure they were well-educated and knew their way in the world. She had taught them to be respectable people and she could use these skills on her future step-children.

During the Uprising of the North in 1537, Katherine and her step-children were held in Snape Castle and the house was ransacked by the rebels. When Latimer returned to his home, he managed to arrange for his family’s release but it was a difficult time for the whole family. Shortly after, Latimer was questioned by Thomas Cromwell to determine whether he was a conspirator during the uprisings or a victim. It is possible that Katherine’s royal connections—her uncle, William Parr, 1st Baron Parr of Hudson, and her brother, William—helped to save Latimer but he also condemned Robert Aske, which also helped him.

The Story of Katherine Parr

In 1542, Lord Latimer started to attend Court. Katherine used this chance to visit her brother and sister at court, where she met Thomas Seymour, the brother of the late Jane Seymour. Katherine enjoyed her time at court. Not only would she be able to learn more about religion, she could find out the latest trends in fashion, jewellery and other matters.

However, Lord Latimer became extremely ill. Katherine nursed him through his illness but he died in 1543. She was left as the guardian of Margaret, her step-daughter, and the owner of Stowe manor. Katherine didn’t want to return to the north but it was possible this would happen, despite being left a wealthy widow. Katherine used her mother’s relationship with Catherine of Aragon to become a member of Mary Tudor’s household and there she caught Henry VIII’s attention.

While she mourned her husband—she had his name inscribed in her New Testament bible—she began a romantic relationship with Seymour. However, Henry VIII wanted her and made sure he got her. It is possible that the knowledge she cared for Latimer while dying made Henry want her more, along with the fact that she had raised step-children. By 1543, Henry VIII would have known he didn’t have too long. He needed to make sure his children were cared for and simply wanted a nursemaid.

Katherine Parr married Henry VIII on July 12, 1543. One of her first actions was to make her step-daughter and her sister ladies-in-waiting. She was definitely trusted by Henry. When he went on his campaign to France between July and September 1544, Katherine was named regent. The last time one of Henry VIII’s wives was named regent was Catherine of Aragon.

Katherine was able to rule as she saw fit, which meant using her liberal and Protestant views. She was lucky that her council was made up of reformers and sympathisers, including Thomas Cranmer, her uncle, Lord Parr of Hudson and Lord Hertford. She acted with dignity and was strong-willed, which possibly shaped Elizabeth Tudor, who later became one of the greatest monarchs in history.

Katherine didn’t help matters. She regularly debated with Henry when nursing and caring for him. She angered him with her Protestant views and her love for debate. He may have been ready to have her executed to save him any hassle. However, he was willing to give her one chance to save her head. He signed her arrest warrant but it conveniently ended up outside her apartments. Katherine rushed to Henry to beg for his forgiveness.

She played to Henry’s pride explaining that she only wanted to learn from him. She needed him to teach her because women were inferior. She needed her King and Master to tell her everything he knew and the debates were a way to take his mind from the pain. It worked just as she had hoped and Henry proved that by shouting at the guard who tried to arrest her the very next day.

Katherine Parr was safe. She never argued with him again and managed to last another year until Henry VIII’s death on January 28, 1547. She also helped to reconcile Henry and his two daughters and arranged for Prince Edward to be raised with Protestant views to help turn the country into the Protestant one she believed in.

Was she smart? She definitely knew how to play to Henry VIII but if she was smart she wouldn’t have argued with him in the first place. Was she lucky? The arrest warrant conveniently ended up where she needed it so she could take action. Had Henry VIII arranged that or did someone else not want to see a third Queen beheaded? It is possible that Henry simply wanted to keep this wife—she had proven to be useful as a nursemaid and step-mother to his children.

The Death of Katherine Parr

After Henry VIII’s death, Katherine married Thomas Seymour. She didn’t want very long and it angered many people at court. Unfortunately, the marriage doesn’t seem to be a happy one. Around this time, Thomas Seymour was attempting a relationship with Elizabeth Tudor. She had been left under Katherine’s guardianship, along with Lady Jane Grey. Katherine sent Elizabeth away after finding her and Thomas together.

Katherine was pregnant at the time with the only child she would have. She had a girl on August 30, 1548 but died six days later, presumably of childbed fever.  However, there were rumours of poisoning by Thomas Seymour so that he could marry Elizabeth Tudor but these are probably just rumours since he was executed just a few years later.

I always feel so sorry for Katharine Parr. Her heart must have plummeted into her stomach, when Henry made it clear that he wanted to marry her.

Smart or lucky? I think desperate and opportunistic. 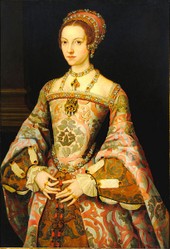