Bird behaviour, bird encounters and birding trips. Join me and let me share over 40 years of experience of watching wild birds in my birding videos.

People often ask me what is the best way to start bird watching. The answer is to just start looking at birds, get some binoculars to make seeing birds easier but there is no need to spend a vast amount of money on them to begin with. Just get out, watch birds, enjoy their variety of colours, shapes and behaviour using a field guide to help you put a name to the birds that you see. Don't worry about making mistakes, we all do that. Even after 40 years of birding I still make the odd mistake, beginners should not worry about that, it is part of the learning process.

I have led birding tours since 2007 and this allows me to share my experience of birds with others but to do this with a larger number of people I make short videos about birds which anyone can watch on Youtube. I make several types of birding videos.

Join me for a birding trip

Leading birding trips since 2007 has given me the opportunity to share my experience and knowledge with lots of nice people from all over the world, as well as learning from many of them too. In my virtual birding trips videos I try to recreate some of the essence of my birding tours in videos of around 8 minutes in length.

In these virtual birding trip videos I visit a different location and show viewers a selection of the birds that can be seen there, trying to give some information about them along the way. Check out this video to see the sort of thing I do.

For beginner birders this pair of Olympus 8 x 40 are a good quality buy. The wide field of view makes it easy to find birds when looking through the binoculars, a skill which can be difficult when just starting.

I own a pair of these as a backup to my more expensive binoculars and can recommend the quality and durability.

See interesting bird behaviour for yourself

We all want to see new birds, that is one of the driving factors for most bird watchers. This desire is the manifestation of a deep-seated instinct to hunt in bird watchers but another rewarding aspect of bird watching is watching their behaviour.

Listen to some amazing bird song

You would be surprised at how many bird calls and songs you can recognize. Experienced birders will have learned many calls over the course of their career but even people with little interest in birds can usually identify the calls of common species that are around them.

Bird song is one of the most striking aspects of bird behaviour and each species has evolved to have a different song and set of calls. Some bird song can be extremely attractive to the ear, such as in the case of Nightingale whereas other species just grunt and squawk. However, frequently the song/call of a bird is the key to telling it apart from another similar-looking species and the diversity of bird song is amazing.

Most birds have a unique organ called a syrinx which enables them to make several different sounds at the same time and it is this organ that makes bird song so amazing. 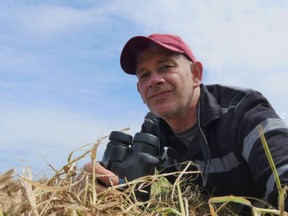 For those who wonder what equipment I use you can see in the list that follows.

For the best quality photographs and video I use a Canon 7D Mark II with a Canon 100-400mm IS Mark II zoom lens. This is a very good quality camera but for video it needs to be on a tripod or rested on a steady surface; it is hard to do hand held video with this camera.

If I need to do hand held video for a fast-moving bird then I revert to an older bridge camera - Panasonic Lumix FX 300 (FZ330 in Europe/UK). This captures 4K video and is excellent in good light although the video quality is noticeably poorer in bad light than if I use my Canon.

In my early videos I did not use a microphone and wind noise was a real problem as was the sound of the camera lens focussing. Early feedback I got was to imporve the audio quality so I bought a microphone which works really well and was inexpensive.

I am out birding a lot. I lead birding tours for a living and of course even when I am not I go out a lot on my own. This leads to a lot of interesting encounters with birds that I like to share with people, particularly some of the exciting spectacles of large numbers of birds in places that I know well.

Some of these are some of my most-watched videos, I guess my genuine enthusiasm for these birds comes across in the video.

As well as video of birds I take a lot of photographs of birds too. I use my Canon camera set up for this; it is particularly good at capturing birds in flight. Here is a small selection of bird photos that I have taken but you can see a lot more on my blog which is linked in the section below the gallery.

Read More About My Birding Adventures

Check out my blog for information on my most recent and upcoming bird watching tours.

Birding at Bach Ma National Park – Vietnam Birding
At the beginning of November 2022 I found myself with the opportunity to visit Bach Ma National Park, near Danang in Vietnam. While other sites in Vietnam could promis...
Queen Sirikit Park Autumn Birding | Thailand Birding
When it comes to spring and autumn Bangkok-based birders head to the city’s parks in search of a wide variety of passage migrants. For migrating birds heading ov...
Daap Toon Hide at Kaeng Krachan | Thailand Birding
What I most enjoy is taking long walks in beautiful countryside and being able to see a wealth of bird life along the way. In temperate countries this is a very pleasa...

Join me on a birding tour to one of a variety of bird-filled countries around the world. The complete selection of planned tours can be viewed here - Calidris Birding Tours.

I am a professional bird tour leader with over 15 years experience of guiding groups and individuals. All the tours are designed to allow sufficient time to find a high proportion of the key bird species and enjoy watching them at a sensible pace.

Indeed. Both peaceful, outdoor activities. I find gardening increasingly attractive a pastime too these days.

Great pictures. I see that birding is to you what gardening is to me, and that is good.

TY Nick. Your photos are beautiful.
There are so many new facts here for me to absorb. ...esp the unique organ syrinx .
Fascinating. Ty

Absolutely. Without birding my mental health would have been totally shattered through the lockdowns that have destroyed my life.

Birding is a healthy recreation and creates interest in conservation among the people. I have been birding for many years as a nature guide. I get little time now but thanks for this wonderful page.

Thanks, everyone loves Puffins.

nickupton, Thank you for practical information, pretty pictures and product lines.
It appears from your profile that you have Thailand and UK connections. Are you self-taught in both places? Do you have regular bird visitors throughout your day (such as the equivalent of the day beginning and finishing here with mourning dove calls)?
Wildlife mapping here is such a rewarding experience. Now I know resident birds, such as big blue herons, and visiting birds, such as rusty blackbirds. Unfortunately, over the past two decades, the most audible, most visible migrations tend to be only those of Canada geese (although I find their calls, landings, maneuvers, take-offs fascinating). Otherwise, I no longer witness exactly how and with whom the osprey settled around the maple- and sycamore-treed ephemeral pond in back.

Nick
What a beautiful page. Ty for posting. I am especially impressed by your own bird photography. I did not know that birds can make different sounds at once. Fascinating. Ty .... esp for the Puffins :)

Your experience with migratory birds is sadly the same all over the world; an ever-decreasing number. You are right about using the car. Quite a lot of the footage I have shot has been leaning out of the car window after driving slowly towards the birds where this allows. Getting to different locations is certainly the key to seeing a wide variety iof species and also in getting close enough to photograph and video them.

We have an abundance of large birds, some seasonal, in this area as well as smaller birds. The larger ones can be observed from a car. On one trip through a swampy area I observed several bald eagles, and two nests. These were visible from the highway, and their young appeared annually. In addition to a multitude of ducks of which we have quite a variety I have observed geese, egrets, blue heron, pelicans (usually brown but for a few years a flock of white pelicans that used a certain pond as a hatchery), and in early hours of dawn an occasional owl. In addition turkey buzzards often can be found feasting on road-kill. Part of observing different birds is location, the variety can be location specific. Small birds in this area are pigeons, bob whites, sparrows, woodpeckers, wild parrots, crows, blue jays, mocking birds, cardinals, and robins, some of which are year round and others are seasonal. I am certain if others list their local brds their lists would be quite different. In the 50s I could stand in my yard are watch large migrations in their V-formations fill the sky, now migrations are limited to no more than three formations.

Thailand has many photographic opportunities as it is one of the most colorfu... 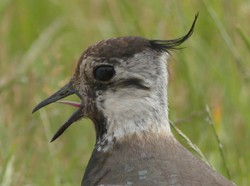 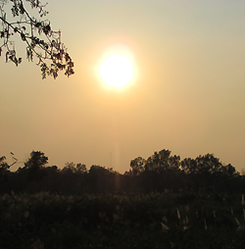 Thailand has many photographic opportunities as it is one of the most colorful countries I have ever visited; read about this photography tour of the country from early 2013.
100%  7   13 nickupton
Wild Birds