Tigon and Liger are the most famous crossbreeds in big cats. But do you know Leopon, Pumapard and Blynx?

Hybrids exist in flora and fauna. Such hybrids are the result from the crossing of parents of different species or races.

The big cats (Panthera) include the species lion, tiger, jaguar, leopard and snow leopard. Crossings of these species with each other lead to the so-called big cats hybrids, of which tigon and liger are the most famous ones. But there are also other exotic big cats among the hybrids, such as the leopon, the liguar, the tigard or jagupard.
Depending on the kind of parents which have been crossed, the babies may be infertile or fertile. The fertile ones can couple with different other Pantheras and this can lead to other mixtures such as liliger or litigon.

Tigons and ligers are not standard in the wild. Lions and tigers have a too different mating behavior, and the live in different areas. Lions live in Africa, the tigers haunt is in Asia. In the wild both - tigers and lions - have enough fellow species to couple with and don't need another species.

But sometimes - for example in captivity in zoos - they have no other alternatives. If various big cats live together in an enclosure and the availability of their own species is restricted or not at all given, they mate with other species, too.

A male lion and a tigress can be parents of a little liger. Each liger (just as any other panthera  hybrid) is unique. A liger can be partially larger and heavier than his parents, the biggest panthera in the Guinness Book of Records is a male liger. Some of the ligers have a mane like their father, others have not. Some of them have the whiskers of a tiger, others don't have.

Also the basic color of the fur can vary from sand colored fur of the lion to the tigers orange. The animals can have stripes or they can be speckled. Also the behavior of ligers can be a conglomerate  of the characteristics of both parents. Liger for example like swimming like tigers. Male ligers are infertile, female ligers can mate with both tigers and lions. Then the offspring is either one quarter tiger and three quaters lion, or reverse. If the female liger couples with a lion, the babies are called Liliger (lion + liger), if she couples with a tiger, the offspring will be litiger (tiger + liger). Kiara is the first liliger in the world. She is the offspring of the male lion Samson and the liliger Zita. Kiara was born in 2012 in the zoo of Nowosibirsk.

A tigon (tiger + lion) has a lion as mother and a tiger as father. They are much smaller than their parents and they are infertile. A large nuumber of  little tigons do not survive, because they have a very high mortality rate. Worldwide there are round about 10 tigons. The chance of a successful pairing is only 1-2%, and then only one of 2 million tigons are born alive.

The father is a Jaguar, the mother a lion. The offspring of the two is a Jaglion (Jaguar + Lion). Conversely, the baby of a male lion and a female jaguar is called a Liguar (Lion-Jaguar).

Father - Mother - Child: In this case, this means:Tiger - Jaguar - Tiguar.

A tigard is the child of a male tiger and a female leopard. Conversely, the offspring of tigress and male leopard is called leotig.

All these terms for large cats hybrids (Töwe, Liger, Jagulep, Jaglion, Tiguar, ...) are portmanteau words. They are composed of the names of the parents. The first syllable (or letters) of the fathers name is responsible for the first part of the word, the mothers name marks the second part of the word.

My father was German and my mother was Austrian. Does that make me a "Germstrian"? Sounds nasty. I better go wash my hands. :D 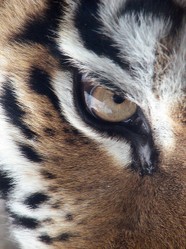