Though she could not enjoy the honor she deserved, Lise Meitner was the original discoverer of nuclear fission.

The discovery of nuclear fission- splitting of uranium nuclei to produce energy- was one of the greatest scientific advances of twentieth century. Not only did it answer one of the most challenging scientific riddles of its time but also it opened the door to the atomic age that we now live in. Though Enrico Fermi (1901-1954), an Italian-American physicist created the first self-sustained nuclear fission chain reaction, the foundation of his success was laid by Lise Meitner, an Austrian-Swedish woman scientist.

Lise Meitner and The Discovery of Nuclear Fission

Meitner, the daughter of a lawyer was born in 1878 in Vienna, Austria. Her birth name was Elise which she shortened to Lise. As a woman scientist and scholar, her achievements were quite remarkable. As a woman she was unable to finish her schooling and had to wait until restrictions on female education were relaxed to enter Vienna University in 1901. There, as a science student, she had the privilege of working under the great scientist like Ludwig Boltzmann. In 1905, she obtained her doctorate degree from University of Vienna, becoming only the second woman to obtain a PhD from the institute.

From Vienna, Lise traveled to Berlin to attend lectures by Max Plank on theoretical physics. During those days, women were not welcomed in academic life; however, despite all the difficulties she had to face, she went on to become the first woman in Germany to assume the post of full professor of Physics in Germany in 1926.

In 1935, at Kaiser Wilhelm Institute of Chemistry in Berlin, Meitner embarked on the trans-uranium research program, a pursuit to create elements heavier than uranium. In those days, uranium was the heaviest known element; Meitner along with her fellow German scientist, Otto Hahn, conducted a long series of experiments that led to the discovery of nuclear fission.

Meitner and Hahn bombarded uranium atoms with free protons, imagining that some of the protons will stick to the nucleus, thereby creating an element heavier than uranium. While other heavy metals exhibited the expected behavior, creating heavier elements than themselves, it did not seem to work at all with uranium. For no apparent reason, it seemed that an element heavier than uranium could not exist. During 1930s, more than hundred attempts had failed for creating transuranic elements-elements heavier than uranium-; nonetheless, Meitner and Hahn were not ready to give up.

In 1933, Adolf Hitler came to power in Germany, which caused most of the Jewish scientists either to resign or to be dismissed from their posts. Adamant towards her research, Meitner continued her work silently, despite having Jewish lineage. However, in 1938, she had to flee to Sweden in order to escape the rise of Hitler’s Nazi party.

In the meantime, Otto Hahn had to continue his experiments alone. However, perturbed by the bewildering failures that his experiments met, he wrote a lengthy report to Lise in Sweden, explaining his sad predicament and pleading for her guidance.  A week later, while Meitner was taking a long snowshoe walk through early winter snow, she had a kind of revelation: an image flashed in her mind showing atoms tearing them apart; the picture was so vivid that she could see, hear, and smell the pulsing atomic nuclei breaking away from each other.  She knew immediately that she was on the brink of resolving the mysterious puzzle that had troubled the physicists for almost a decade. Using her brilliant scientific imagination, she came up with the following explanation:

Adding additional protons must have made the uranium nuclei unstable; they split apart creating 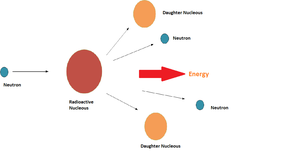 barium and krypton with release of immense amounts of energy; Meitner had discovered the process of nuclear fission. Four years later, in 1943, Enrico Fermi created the first nuclear reactor- a product of Meitner’s discovery; while the 1945 atomic bomb was another application of her brilliant sighting.

Though her discovery can be regarded as one of the greatest in the entire scientific history, Meitner was subsequently neglected by the scientific community. In 1945, the

Royal Swedish Academy of Sciences awarded the Nobel Prize in Chemistry to Otto Hahn, for the discovery of nuclear fission, overlooking his collaborator of two decades- Lise Meitner- who gave the first theoretical explanation of the fission process.

Though often forgotten while rewarding, the stature of Lise Meitner as a woman scientist cannot be falsified. For her discovery of nuclear fission, Meitner is titled “the most significant woman scientist of the twentieth century”. As a woman and as a Jew, she had to battle against the prejudices of her time to become an important physicist. For her resilience and brilliance, she can be regarded as a role-model for the women scientists of the twenty first century.

Without doubts, she was a great woman and a great scientist.

Lise Meitner had a lot of obstacles to overcome and still she persevered - great story, of an obviously intelligent woman not given credit due.

Thanks a lot. Much appreciated.

Nice first article. You have made a good start.

You have hit upon another, seedier aspect of academic culture, the way in which well placed people grab credit for themselves at the expense of other, deserving people. Of course, Lise Meitner might just have been glad to have escaped with her life. Many did not. Even so, her claims should have been recognized. Interestingly, her moment of insight resembles Kekule's vision of the Benzene molecule, yet his is the classic example while hers is overlooked.

Agreed frankbeswick, winners should show some grace.
Appreciate your comment.

In driving out Jewish scientists the Nazis sowed the seeds of their defeat. Justice!

Her forced exile from Nazi Germany in the middle of the research was the most likely cause of her contribution being neglected, but that was not her fault. I believe all people should be given their fair share regardless of sex, religion, or ethnicity.
Thanks for commenting.