Lord of the World: a review

Robert Benson's- re-released dystopian novel was the ancestor of the tribulation novels now popular among Christians and an inspiration for Tolkien and C.S. Lewis.

Robert Hugh Benson, a brilliant and literally prolific writer and Catholic priest,who died aged forty four, wrote this book in 1907 and set it in 2008. While he clearly does not anticipate the advances in technology that have happened since his time and is unaware of the historical direction that the twentieth century would take, he focuses on the ultimate apocalyptic situation, when the Devil, now embodied in human form, is able to use his seductive and manipulative skills to get himself nominated as president of the world. He uses his power to launch a persecution of the Catholic church. Unlike the modern sort of tribulation novel, produced by biblically literalist Protestants, there is no rapture, and there is little graphic description of apocalyptic horrors. For Benson the horrors are the evils wrought by Satanic influence in the world.

The Gist of the Tale

In this imagined future the world is divided into power blocks, which are in tension with each other and people are fearful of coming war. One American senator, who is a mystery to everyone, travels the world bringing peace. Julian Felsenburgh, for that is his name, can apparently speak all languages and has considerable oratorical powers. We soon realize that Felsenburgh is the anti-Christ, the Devil embodied, and he can sort out the threat of war because he is the one behind it, the manipulator of nations. The grateful governments of the world make him world president. Soon he has established a cult of himself and is demanding worship.

The fate of the Catholic Church, which resists this evil, is dire. The novel follows the course of Father Percy Franklin, an English priest. Franklin is called to Rome and made a cardinal, and when he uncovers  a plot by Catholic hotheads to blow up the government [shades of Guy Fawkes] he and a German cardinal set off for England to expose it. It is their salvation. Felsenburgh uses the pretext of the plot to destroy Rome and massacre its population, including the pope and all the cardinals. But the two cardinals have survived and make their way to the Holy Land, where they and the dying Patriarch of Jerusalem hold a conclave to elect Franklin as Pope. He continues his mission undercover from Nazareth, restoring a sacred college of twelve cardinals [the twelve surrounding the master is significant, for Jesus had twelve  apostles.]

But the significance of twelve is that one betrays his master. The Devil sees his chance to finish off the Catholic Church for ever and dispatches an air fleet to destroy Nazareth and all in it. Its only restriction is that the destruction must await the arrival of the Devil's own aircraft [for being embodied he is subject to physical restrictions] as the Devil wants to enjoy the show. When the Pope realizes that he is betrayed and death is coming he and his followers celebrate mass for the last time. They are asserting their central value in the face of impending death. This is a beautiful piece of writing.

But Satan is so focused on his impending victory he does not realize that his force is to meet the powers of goodness near the plain of Armageddon and that by doing this he provokes the prophecies of the Book of Revelations to come true. So obsessed by victory is he that he does not read the signs in the heavens, and his victory becomes his final and ultimate defeat.

Lord of the World

Benson was a scholarly man and an able writer, thus the book is well written, and like all quality writers he is able to create an effect without excessive verbosity. There is an economy of language which does him credit and makes the book easy to read. Yet ease of reading is not attained by limitations of language, but rather by mastery of it. Unlike certain modern books, which aim at large size, the text is concise and well focused on essentials of the plot.

Benson is able to graphically describe and does so through his scenes of mob violence. Yet there is also powerful description of the apocalyptic events of the last few days before the conclusion. The description is not excessive, but he conveys an air of impending menace. His ability to convey menace without over-playing horror is reminiscent of Poe. Part of the horror of the book is the sympathy that you have for the good characters in it, but also for the misguided, but well-intentioned Mabel, whose politician husband is drawn into Felsenburgh's system.

You sense little sympathy for Father Francis, the priest who betrays his faith and serves the new idols. You find this lack of sympathy in Graham Greene's The Power and the Glory,also a Catholic novel, where the failed priest is an object of scorn. For Benson a priest's betrayal is the worst of all.

The book explores issues of spirituality. and it is a powerful examination of Catholicism from the inside. The final section, where a priest is reflecting on the Eucharist as he awaits death is well-written, and I have been drawn to read and re-read it. This section has a powerful fascination for the reader, at least I found it powerfully fascinating.

Some of the issues reflect the intellectual issues of the author's period. Benson portrays the idolatrous worship produced by the Devil as being drawn from masonic ritual, reflecting the Catholic Church's long term rejection of Freemasonry, but this is an issue which is not central to the book and is not one of serious importance in our time. More central is the author's contention with "the religion of man." In 1907 people still believed in the inevitable ascent of man, and this had been reflected in the nineteenth century religion of man, invented by the positivist Comte. Benson portrays this as the Devil's back door into human worship. This religion of man is, however, a dead duck in our time. Comte's attempt was  a miserable failure. Humanism is its descendant, but while something like it was briefly suggested by Alain de Botton, it is not a major intellectual force in our age. Benson did not envisage the resurgence of militant Islam, but few people did at that period.

Tolkien was a devout, traditionalist Catholic and so he would have been familiar with Benson's works. Certainly, the key issue of the Lord of the Rings was an attempt to take over the world by a Satanic figure, Sauron, and this theme is the centre of Benson's book. I find it inconceivable that Tolkien had not read Benson's Lord of the World. But Tolkien did not deal with the end of the world, as Benson does. Both are Catholic books, but they operate in different periods, one an imagined past, the other an imagined future.

The Inklings, the literary circle to which Tolkien and Lewis belonged,  would have been familiar with Benson's writings. The theme of a Satanic take over is reflected in Lewis' cosmic trilogy, particularly in the final volume, That Hideous Strength. Lewis, however, differs from Benson insofar as he explores the inside of what it means to be tempted. Benson's central figure, Father Percy Franklin, is steadfast and while he suffers pressures, there is no wavering in his commitment to his faith.

All in all, this is a book that is worth reading. The author sustains interest throughout. If you are interested in novels about spiritual matters then this book will satisfy your interests.

Coming to a book, Revelations, without pre-conceptions as you have done is an interesting approach. However, examining the symbolic world in which it existed is is fruitful for deepening one's knowledge. It is a very deep and complex work that repays scholarly study.

I have read the Tolkien and Lewis books that you mention, but have not heard of the Lord of the World. Interesting review. I did a study on Revelation, just using the Bible, scripture revealing scripture, untainted by men's conceptions, that was very interesting over a period of a few years.

I thought that it would appeal to you. One tip, I have selected two editions, but there is another edition produced by Amazon which contains typographical errors, few certainly, but irritating.

I want to read this book. I'm pinning this article to my All Catholic board.

Indeed a theme worth reading, I am fond of stories related to apocalypse and this one seems quite an interesting one. Benson is indeed an accomplished writer. 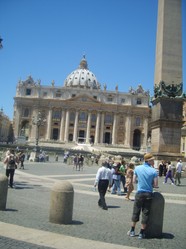 Walking the Great Glen25 days ago