This isn't my typical writing.  It was written with a particular type of audience in mind.  Below the article you will find links to my more studious writing. Only two tombs in Valley of the Kings, the graveyard of many of the most famous kings of ancient Egypt, escaped plunder thousands of years ago: the famous tomb of Tutankhamun and that of Yuya and his wife Thuya.  Although Yuya may seem much less famous than Tutankhamun, he is often believed to be the real Biblical Joseph made famous by Andrew Lloyd Webber and is probably the great-grandfather of Tutankhamun.   The great tragedy of the break in at the Egyptian Museum in Cairo, one of the world’s greatest museums, is that items from both these tombs were stolen, breaking up collections of objects which had survived intact for nearly 3,500 years. (Picture - Tutankhamun Statues - © Kate Phizackerley)

The Egyptian Museum stands in the heart of Tahrir Square in Cairo and formed the backdrop to the Egyptian revolution which forced President Mubarak from power.  On 28th January, as the building next door burned, looters entered the museum.  In a desperate attempt to cling to power, the Mubarak regime had withdrawn the police from all of Egypt’s museums and ancient sites.  There were no visible guards in the museum; no alarm; no CCTV.  The museum’s priceless collection was a plum for picking, which is exactly what nine men did, entering on ropes through a skylight.  They smashed nearly 70 objects, mostly lesser treasures, before stealing 17 masterpieces, including two gilded statues of King Tutankhamun and figures of his great-grandfather Yuya, statues of his aunt and uncle Queen Nefertiti and King Akhenaten, and even a carved head which depicted a princess – possibly his wife Ankhesenamun.  Although the museum houses treasures from nearly 3,000 years of Egypt’s ancient history, all of the objects initially reported stolen belonged to Tutankhamun’s immediate family and just a short century of history.  We now know that some more recent figurines were stolen as well, but while many of these have been recovered by police, several high-value objects associated with Tutankhamun’s family are still missing.

Where Were the Guards?

Update It now seems as though the Museum Director and three or four guards were in the museum control room. They claim to have preserved many items by turning out the museum lights, although the robbers still successfully taegetted the Tutankhamun gallery. They also didn't intervene - at least not until the robbers tried to flee when one with a damaged leg was detained. 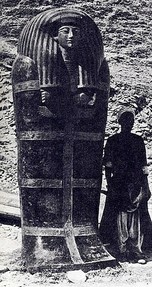 Is that a coincidence?  It looks much more like a targeted robbery.  Dr Zahi Hawass, the Minister of State for Antiquities during the crisis, disputes this saying that the intruders did not take the famous golden mask of Tutankhamun.  The mask though was stored separately in a well-protected vault and would have been far harder to steal.  The robbers did smash another priceless statue of Tutankhamun showing the boy king riding a panther, but that looks to be a failed attempt to break off a chunky wooden base so that the gilded figure of Tutankhamun could be concealed beneath a jacket and smuggled out of the museum.

Although the intruders got away with a few dozen priceless objects, it could have been so much worse.  The protesters in Tahrir Square, recognising the danger to the museum, linked arms to form a human chain around the building until the army could arrive to secure it.  They surely prevented a much bigger theft.  One of the fleeing robbers even dropped a piece of Yuya’s jewellery which he had stolen, and which is now safely back in the museum. (Picture - Yuya's outer coffin - public domain)

Even the Pyramid Site at GIza Was Attacked Across Egypt villagers came together to protect Egypt’s ancient tombs, temples and museums.  Not everything was saved.  The vast desert graveyards of Abusir, Saqqara and Dashur outside Cairo were too big to protect and were raided by groups of up to 200 men carrying pistols and shooting in the air to drive off museum staff and archaeologists.  Tombs were forced open and carvings stored in them were stolen.  Work has started to inventory the losses, but so far as is known the beautiful decorated walls of tombs were thankfully not vandalised.    The pyramids of Giza themselves might have been raided, but a security wall around the entire site was completed a couple of years ago and helped to keep them safe.   Sadly, more recently, locals and camels and horses have swarmed over the Giza site, and the security wall may have been breached. (Picture - The Great Pyramid and Sphinx at Giza in Better Times - © Kate Phizackerley)

Update We now know that a store room at Giza was raided but few details have been revealed. If interested, please visit the Egyptological Looting Database 2011 - see below. 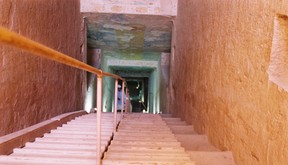 Tutankhamun’s own mummy still lies in his famous tomb in the Valley of the Kings near the modern tourist city of Luxor.  When the local villagers heard that the Egyptian Museum in Cairo had been raided, they rushed to protect the Valley of the Kings.  As well as guarding the valley, they set up roadblocks so that robbers could not get to the tombs.  Across the Nile in Luxor, the large temple of Karnak where Tutankhamun worshipped needed protection. The local Mosques organised the villagers into teams with up to 100 men to a side, working in shifts.   They drove off one armed attack led, it is said, by a policeman wearing civies.  The Egyptian people secured their own heritage and in the process rediscovered their pride in being Egyptian, a pride which took the people’s revolution all the way to the overthrow of the hated Mubarak.  Hopefully they will be rewarded by true democracy. (Picture - A Tomb in the Valley of the Kings - © Kate Phizackerley)

The Magic of Tutankhamun 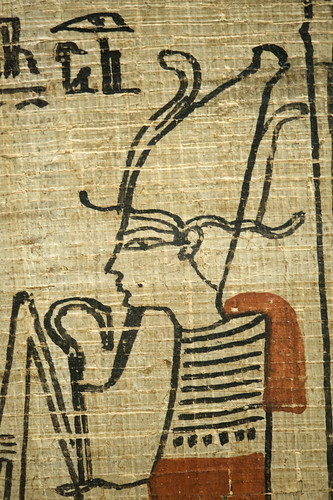 If the villagers had not been warned by the raid on the Egyptian Museum, Tutankhamun’s tomb could so easily have been raided, his gold coffin stolen, and his mummy desecrated.  Although the objects stolen from the Egyptian Museum are a big loss to the world, the sacrifice was not in vain as it helped to save Tutankhamun’s tomb and mummified body.  To our modern, scientific minds that is just a coincidence.  The ancient Egyptians would have seen things very differently.  Kings and nobles were buried surrounded by spells written in the famous Egyptian Book of the Dead, spells intended to give objects in the tomb special powers to protect the deceased person.  The ancient Egyptians would believe those spells had indeed worked to protect King Tutankhamun as he lies in his tomb.  The magic and myth of Tutankhamun lives on. (Picture - Book of the Dead of Taiuherit - © Rob Koopman via Creative Commons)

Hello, my name is Kate Phizackerley.  I have been writing since I was a teenager.  You can find my business writing at Kate Phizackerley Means Business (I still love that title!) and of course I am on LinkedIn.  Obviously I am on Squidoo where I have many more articles about Ancient Egypt - and Tutankhamun in particular.  I am also the author of News from the Valley of the Kings and have founded Egyptological with Andrea Byrnes.

Throughout school the story of Tutankhanum has always been one of interest to me and thanks for bringing that story to life here.

Kate your writing is always so fascinating and your insights into your area of expertise so valuable - delighted to see you here at Wizzley!

Thanks for the support!

Hi! Nice to see you at Wizzley, welcome.
I love the post, the history, and, yes, the magic of the tombs in Valley of the Kings which always fascinated me.
Reagrds

I would have been very difficult to get to the Mask of Tutankhamen as the area it is in at least seems secure. That wasn't always the case. If you will recall in the 1990's someone stayed overnight in one of the bathrooms and broke into a case and grabbed one of the famous daggers and placed it in his boot and tried to walk out of the museum. I believe the story went that he was caught because he was leaving just after the museum opened and the guards didn't remember him coming in. A couple of years after that was when they installed the security bars.

When I was last there in May 2010, I was struck by how in my opinion, the quality of lighting and even maintenance in the museum had deteriorated. Even at midday, it was difficult to see some things due to a lack of light, particularly in the area outside the 2nd Royal Mummy room where the tentatively identified mummy of queen Tiye was. You could see the light sockets overhead open without a bulb in them.

Hereward The Wake ~ A Saxon Hero

Who was Hereward the Wake and why was he outlawed?

Hereward The Wake ~ A Saxon Hero

Who was Hereward the Wake and why was he outlawed?
100%  43   18 frankbeswick
Other History