Mennonite beliefs are what set this group apart from other segments of the Anabaptist denomination. Here's a snapshot of their major beliefs and practices.

The Mennonite church has been in existence for over 500 years, dating from the Protestant reformation in the 1500’s, and having its roots in the Protestant and Catholic religions of that era. The church has grown from that 1500s beginning to a worldwide presence. In fact, according to Mennonite Church USA, they have "over 109, 000 members in 44 states." (1)

What Do Mennonites Believe

Note: This is a brief overview of some major Mennonite beliefs and not an all-inclusive, exhaustive study.

Menno Simons - Founder of the Mennonites

Additionally, many Mennonites observe the rituals of foot washing and the Holy Kiss.

The Relationship Between Anabaptists and Mennonites

Anabaptists, or rebaptizers, as they were called in the Reformation period, disagreed with the common practice of infant baptism, as they felt infants could not:

They believed that only adults could go through the process of salvation and be baptized, and they base their belief on Matthew 28:19-20.

The early Mennonite church in America consisted of two branches: the Amish under the governance of Jacob Amman, and the Old Mennonites. While many people believe the Amish and the Mennonites are the same religion, they are not.

Amish hold to strict beliefs and practices concerning separation from society, church discipline, dress codes, and the Ban. Mennonites adhere to a less strict form of governance with no restrictions on clothing.

This brief overview of Mennonite beliefs has only scratched the surface of the interesting facets and practices of this Anabaptist Christian denomination. If you would like in-depth information on this religion, the website for the Mennonite Church USA is a good place to start.

Gingerich, Ken, “Who are the Mennonites,” Third Way Café,

Share Your Thoughts About This Overview of Mennonite Beliefs

Thank you for commenting on this article. I'm glad it was useful :)

That's great! I never really knew the difference before! Thanks. 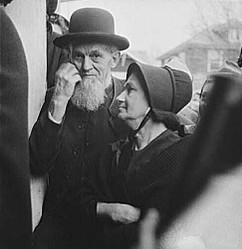