Looking for a vibrant city to meet new people? Perhaps you should start mingling in Manchester.

Manchester is a wonderful city. It hosts two giant football clubs, commonwealth games venues, a gay village and 2.2million citizens. As one of the largest cities in the UK, there is so much Manchester has to offer. So if you’re looking to go to new places and meet new faces, then Manchester could have all of the answers.

When the sun falls, Manchester comes alive. The city is notorious for a wild nightlife. Typical visitors would be groups on a stag or hen party, but still promises to host a fantastic night no matter if you’re on your own, with a couple of friends, or even with family. Premiership stars have been known to be in the expensive clubs (to their managers’ delight) so if you’re going all out you may even get the chance to meet one.

During the day the city is a great place for dating in Manchester, with some lovely bars & pubs to take a date. You will find the city carries a friendlier, calmer and vibrant atmosphere when the sun is shining!

It’s rare to find somebody in the world who doesn’t know about the footballing giants, Manchester United (AKA The Red Devils). The club has been hugely successful over the last 30 years, winning 19 Premier League titles, 11 FA Cups, 3 Champions League cups and many more domestic trophies. They have a 330million (and growing) worldwide fan base and have recently been declared the richest football club in the World for the 8th year in a row.

The Red Devils’ neighbours, Manchester City FC, have always been quietly playing football around the corner. But in recent years the club has under taken new ownership and invested substantial amounts of money. They now attract some of the best football players from across the globe, and are now taken very seriously by United. If you’re lucky enough to get a ticket to watch either of these teams play, you’re in for a treat of real class on the football pitch. If not, they’re always on TV.

Manchester hosted the Commonwealth games in 2002, which boosted the city’s sports facilities. Manchester Velodrome was built for the games and is now the headquarters for Team GB’s cycling team, who stole the show at the 2008 Olympics. Other venues include The Manchester Arena, The G-Mex, Manchester Aquatics Centre and The City of Manchester Stadium – which has now been renamed ‘Etihad Stadium’, home to Manchester City FC. All of these facilities are great for those who live an active lifestyle and enjoy sports; these are another example of a great place to meet new people.

Many of music’s most influential artists have come from this city: The Smiths, Oasis, The Buzzcocks, Joy Division and New Order, to name just a few. There are lots of venues around the city that host great nights to see live acts. A lot of people who are interested in something like eHarmony dating would take their date to small venues such as the Roundhouse, the Ruby Lounge, Band on the Wall, the Deaf Institute and the Night and Day Café for a fun night with someone new.

Who's your favourite Mancunian artist?

Manchester is a huge city with so much to explore – perfect if you’re single and willing to try new things. No matter what your relationship status, it’s well-worth a visit and promises a great experience!

Mancunian Music Artists
A list of notable musicians from the city of Manchester.

Recommended Bars for a First Date in Manchester
10 recommendations for a bar to take someone on a first date in the city, plus a list of other venues. 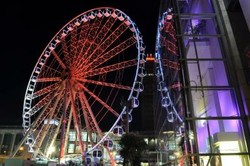