My Shiny Teeth and Me

You know the drill.

I've been a dental nurse for 4 years, I don't know everything there is to know about teeth, not by a long shot, I'll leave that to the dentist. I get asked questions by people all the time relating to their teeth, so after one such conversation a friend suggested I put my advice down on 'paper' as it were. I'm sure there are others out there just as curious about their teeth as my friends.

I left school 10 years ago and haven't had to write in full sentences let alone paragraphs since then. So for me, this is a learning curve and a bit of mental exercise to pass the time.

Hopefully i'll branch out away from teeth at some point but for now I think i'll hide out in my comfort zone where its warm and cozy and smells faintly of thymol.

Happy, catchy and addictive, its the earworm in my head during the working week.

I play all sorts of games...badly.

I'll play anything and everything but I always return to Runescape. I've been playing now for around 9-10 years over various accounts.  I'm a level 127 questcaper currently working towards the taskmaster achievement. If you play then add me, Tabt , I'm always up for a chat.

Runescape has been one of those life defining things for me. I've been playing it for so long and met so many fantastic people from it that I'm just not sure who or what I'd be without that influence.

Most of my friends come home from work and put the tv on and worship the television shrine, I do a similar thing but chat to my online friends on Skype instead or play a new game that someone linked me to. Currently, the novelty of this site means its just like a game I'm playing at. Let us hope it has the same staying power as Runescape, its certainly making me think more.

I'm fairly new to Ceroc or C'est Rock! But have a long, long way to go. Luckily its a pretty casual affair and I make a trip to the bar beforehand for a pint O'Cider to calm my nerves. This also helps with the problem I have of being lead. Apparently thats normal for women, we don't like being told what to do! I go dancing on a wednesday and it breaks the week up perfectly, normally on a Monday all I long for is Friday, now I'm actually coming to love my 'hump day' dancing.

An example of Ceroc dancing.

So far i've been for an interview and found out that i've been accepted to volunteer at the London 2012 Olympic Games. I know I'm working with the Events team and I know that my venue is the Main Olympic Stadium. So far I know very little else. The people I met at the interview were fantastic and I can't wait to attend a training day to get to know the team I'll be working with.

Volunteering has always been one of my passions, from cutting down trees on a local conservation project to being a cub scout leader, it all makes me feel happy. At work you do it because you have to, to earn money, a living. I'm lucky in that I love my job but with volunteering its a totally different animal. Everyone wants to be there, if they didn't want to be they would be off doing something else, its that being part of such an enthusiastic and willing team that really makes it for me.

A volunteering memory that isn't exciting or significant but has stuck with me was when I used to help out at a care home for the elderly. I could only have been 15 at the time and I used to run the tuck shop and the library trolley. In one of the rooms was an elderly lady who always used to wear her wig on backwards and attempt to trick me into selling her chocolates. She was diabetic you see, she knew full well i'd been told not to sell her anything edible but each week it turned into a battle of wits, her making up stories of visiting relatives and me trying to work out why her fringe was on the back of her head. Its only a small memory but Its one that has stayed with me.

I drinks it all of the day I am a cider drinker It soothes all me troubles away Oh arr oh arr aay Oh arr oh arr aay. Read more: http://artists.letssingit.com/the-wurzels-lyrics-i-am-a-cider-drinker-r71kznz#ixzz1ptkGXMAK LetsSingIt - Your favorite Music

Sadly I'm not a Wurzel but my favourite tipple is cider. Recently I went to a cider festival and made the mistake of asking the barman what he would recommend. Obviously he didn't offer me anything nice and scrumptious, he gave me the brew nobody else wanted and he was evidently having trouble shifting. After my first sip I could see why.

It was cider that was fermented in an old rum barrel and it stank of rum. I do enjoy a bit of that now and again, Captain Morgan's or such like but not in my cider! Next time I think I'll be choosing my own cider, lesson learned. Never trust a salesman.

And not a terribly good one.

Don't get me wrong, I can ride well, and I know all the laws of the road. My bike is my main source of transport, I'm just unlucky. I've been hit by cars and had more accidents than I care to remember, or maybe thats just the head injuries making me forget.

Now, If you see me cycle around picture a bike covered in reflective devices, a big neon yellow jacket, a yellow helmet and enough lights to illuminate a christmas tree. My friends tell me I look stupid, but better to be an embarrassment to them than a crash test dummy once again.

Loved this. Loads of character and what you have to say is interesting! Most writers would kill to be interesting.:) 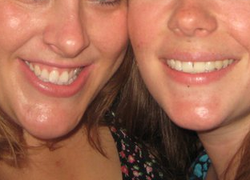