My Visit To The Homicide: Life on the Street Filming Location

Visiting the filming locations of one of my all-time favorite television crime dramas.

We took a family vacation to Washington, D.C. this past summer and on the drive home to New York my husband had a surprise for me. He took the exit into Baltimore and for the life of me I could not figure out where we were going or what the surprise was.

We finally arrived on a busy street and he parked the car. He said, "Do you know where we are?". I was still confused, so I said no. He said, "You should." Then I looked around the street again and it suddenly clicked. We were parked across the street from the Baltimore City Police station which was the filming location of the popular crime drama Homicide: Life on the Street.

Homicide: Life on the Street is one of our favorite shows. A few years ago we watched the entire series from beginning to end. We don't share a similar interest in too many television shows, but this show was one that we both enjoyed.

It was so exciting to be standing on the steps of the police station where so many wonderful scenes were filmed. We also took a walk over to the pier and ate lunch at the Waterfront Hotel.

We had a great time and this page features some of the photos we took of our visit.

All photos on this page were taken by me during my visit. The photo pictured above is the plaque that is on the police station building. It reads:

Hanging Out at the Baltimore City Police Station

Homicide: Life on the Street was filmed on

Here is a photo of my husband and I standing in front of the Baltimore City Police Station. The police station's signature rundown, peeling paint was amazing to see in person.

A Peek Inside the Police Station

As much as I would have loved to have gone inside the building and walked around, the doors were locked. So, I peeked inside the glass door and was in awe to see the staircase where so many classic scenes were filmed. 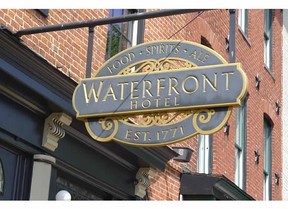 We ate lunch at the Waterfront Hotel.  This is the bar that in the show was co-owned by Munch, Bayliss and Lewis. We were with our kids ages 8, 12 and 15 and the bar was not very kid-friendly.  So at first we were going to eat at a different place, but then decided to just eat at the Waterfront.

I am so glad we did because it was completely amazing to be inside the bar!  My husband and I had a blast pointing out all of the décor that we recognized from the show.   My only regret was that my son was not wearing his New York Yankees jersey since the place was filled with Baltimore Orioles fans!

More Photos from Our Visit

Homicide Life on the Streets Merchandise

I liked that show and watch reruns whenever they're on. It must have been exciting to see everything up close!

We used to stop in Baltimore for crab cakes when we would go to Washington DC. The Inner Harbor really is a lot of fun. I like true crime dramas as well. 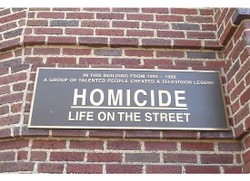