NARNIA - The Lion, The Witch and The Wardrobe

C.S. Lewis created a series of tales that inspired Disney to make The Chronicles of Narnia. His Irish childhood spent in Belfast surely influenced the magical content of the tales.

The first Narnia book was published in 1950 since when countless children have followed the stories of the mythical world found behind the wardrobe. Since its publication the books in the Chronicles of Narnia have sold more than 100 million copies and been translated into some 30 languages. As a child, C. S. Lewis made up stories about a place he called "Animal-Land" inhabited by animals, mice and rabbits who rode out to kill cats, stories which he related to his brother as they sat among the coats in their grandfather's old wardrobe. He even created detailed maps of the fantasy world.

The Lion, The Witch and the Wardrobe

Four young children from wartime England accidently discover a magic land, called Narnia, that lies beyond and through an ordinary wardrobe. Once through the wardrobe and into the mythical land,  Edmund,one of the children, betrays his siblings to a wicked witch who has been holding the mythical world of Narnia in thrall to winter.  Spring can only come to Narnia and the betrayal be forgiven when the lion Aslan agrees to die at the witch's hand.

Clive Staples Lewis (known as Jack) was born in Belfast on November 29th, 1898 to the comfortably off Albert James and Flora Augusta Hamilton.  The house in which he lived, Little Lea, is generally credited as the one from which he derived inspiration for his stories.  It was a large, gabled house overlooking the River Lagan, with dark, narrow passages and a library that was crammed with books—two of his favorites were Treasure Island by Robert Louis Stevenson and The Secret Garden by Frances Hodgson Burnett.  There was also an overgrown garden in which the children played in together. In those days Northern Ireland was not plagued by bitter civil strife, although there were always tensions.

During the second world war, many London children were sent to live in the country to avoid the bombing and the air-raids, and Northern Ireland had its share of evacuees.  Like the Pevensie children in The Lion, the Witch and the Wardrobe, several groups of children stayed with Lewis at his country home. 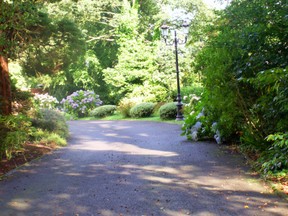 Looking around the area in which he grew up, it is not hard to believe that his surroundings inspired the mythical land of Narnia.  The craggy, heather-draped Mourne Mountains just a few miles away, Belfast's own Black Mountain, and the lakes, rivers, forests and ruined castle with which the area abounds surely played their part.

Places to Visit that are Connected to C.S. Lewis in Belfast and surroundings.

Unfortunately, it is not permitted to enter  Little Lea, Lewis's former home, as the house is privately owned but fans of the book seem satisfied to stand outside and gaze at the one-time family home.

Nearby is the Church of St. Mark where there is a font in which it is believed the young Lewis was christened.  The avid fans when walking around the area will find other sites believed to relate to some of the scenes in the books.

Any tour of Lewis's Belfast must encompass the magnificent bronze of The Wardrobe (called "The Searcher") by Ross Wilson which has been erected in central Belfast and the many murals on Belfast's walls which refer to the man and his work.  However, Belfast today is one of the most vibrant cities in Europe and murals are changing rapidly.  There is even talk of covering over the famous political murals. 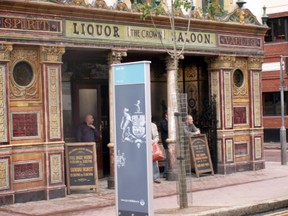 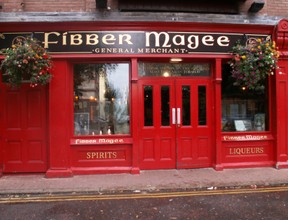 Other Sites in Northern Ireland that Inspired The Narnia Chronicles.

The jury is still out on some of the places but the 17th century Dunluce Castle on the Antrim Coast is believed to be the basis for Cair Paravel, the royal fortress in Narnia.

Don't do too much re-reading! There are some great modern writers out there who need you. Having said that, I confess to dipping into old favourites at times, it's like being slightly unwell and wanting one's favourite food.

I like reading Lewis. I re-read his Cosmic Trilogy only recently. With being retired, I now have more time on my hands, and I may re-read Narnia.

You've read this really well, haven't you, not just well but in depth. Yes, Lewis did change his views somewhat but whatever his views his subject is always intriguing.

The Last Battle shows how Lewis had refined his views on admission to the afterlife. Note how the sincere Calormene is saved, whereas his cruel and cynical master is not. Lewis opposes the dishonest religious syncretism of the ape,as much as he opposes the cynical false religion of the Calormene lord, but accepts the genuine sincerity of the Calormene soldier and the unintelligent, seriously duped donkey.

The whole Narnia chronicles series were a popular read when I was a kid. I think our whole class went through the series in a couple of months. We were so young, but still have a soft spot for this and many other books by CS Lewis. Enjoyed reading and seeing the area that probably inspired him.

Thanks for comments on Narnia. I did a tour around the area with a Belfast taxi-driver who was a keen fan and who filled me in on a lot of the Lewis Irish history. I would have loved to have seen inside the house but alas, not possible.

It is worth note that one room in Professor Kirk's House, not the wardrobe room, contained only one object, a harp. This was a symbol of Lewis' Irish background.

The symbolic life of Narnia is very rich. Each of the seven tales has a religious theme. My favourite is the Magician's Nephew. This was the second last written, and Lewis had by this time refined his thoughts on his magical world.

I love the photographs, and thank you for this article. I have just, coincidentally, finished reading Lewis's book, "Surprised By Joy" so your article was an additional treat.