With the new Marvel Avengers movie coming out May 4, 2012, Avengers fans old and new will want to pick up this cool new gear, and get ready with popcorn in hand to watch the movie.

I am one of many people who have been eagerly awaiting the long anticipated Marvel Avengers movie, due to come out on Friday May 5, 2012. There are several reasons that I am looking forward to it.

The first reason is that I have been a superhero comic book fan since my teens, and although I do not spend nearly as much time with comics as I used to, I still get a thrill from seeing the characters come to life again. Marvel has done an excellent job bringing its heroic characters to life in individual movies, and it will be a real ride to see how well they can combine them into one big movie.

The second reason is that I am glad that I can share my love of comic book heroes with my children. They are at the age that they can appreciate both the fun of the comics with the art and history behind each character's development. Going to these particular movies has been a family affair, with an opportunity to introduce my kids to the superheroes that I grew up with.

With this latest movie, I will be additionally eager to see if I can recognize my hometown, Cleveland, Ohio, in the various scenes, because part of The Avengers was filmed in Cleveland. Movie crews blocked off several blocks in the center of downtown for three weeks to film the action packed scenes.

The Avengers has many familiar characters that we have been introduced to in the last few years in their own individual movies.  Ironman, The Hulk, Thor, Captain America, who we have already met on screen will be met by some newer faces, Hawkeye and Black Widow.  In addition, we will see a lot more of characters who have only been hinted at in previous movies, Nick Fury, Phil Coulson, and Maria Hill, who are agents for S.H.I.E.L.D., an international peacekeeping organization.

For those of you who have not seen all the previous Marvel character movies, I highly recommend at least viewing Iron Man, and Thor before seeing this movie.  Otherwise, you will most likely be completely lost when the plot starts to thicken.

I haven't mentioned the villain in this film, who is Loki, Thor's younger brother.   Loki was not completely evil in Thor.  He starts out being happy, then jealous, then becomes evil.  At the end of Thor, we see Loki fall into space, assumed dead.  In The Avengers, we see him come back after being stopped by Thor from taking over Asgard, and Loki is after revenge.

Getting Prepped to Watch The Avengers

Everyone has their own way to get ready for a blockbuster movie like The Avengers.  You may want to go back and rewatch some of the previous Marvel movies.  Others of you may want to get out your old comic books about The Avengers to see how well the Marvel team comes out in the movies.

One fun way to be ready is to take a look at both the new gear that is available, and also some of the old comic books that are still quite collectible on the vintage market.

Collect The Avengers Art on Posters and Other Products

Although each rendition of the Marvel superheroes is an interpretation by the writer, the artist, and in this case the director and actor regarding the film role, it is still fun to go back and reread the original versions of the superheroes, and their adventures in the comic books they came from.

Part of the development of Marvel Comics and the heroes it represented came out of the history of the time.  Captain America is obviously a need to have an American hero during the War (if you haven't seen that movie, it is excellent, better than I thought it would be).  Revisiting the old comics can remind you of the fun you had as a teenager, and the heroes in their prime.

Let me leave you by showing you just one of the beautiful full sized posters from the many years of Marvel's The Avengers comic artists.  The are posters, t-shirts, and more featuring both vintage The Avengers, and New The Avengers art on AllPosters.  They are even more beautiful in person than on screen.  Don't you think you need at least one?  (If you click through, you will see more beautiful art.)

It is amazing how many large companies are on Zazzle. And some on CafePress. I believe these are Zazzle products.

@terrilorah Yes, my daughters and I have decided that Thor is extremely hot. We watched Iron Man today on TV, and they kept showing clips of the new movie.

I am also looking forward to the Avengers. That Thor is not too bad on the eyes either... 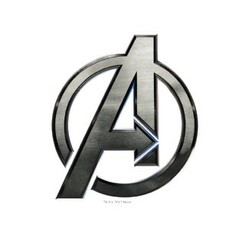