Fishermen from Oklahoma and nearby states meet in Paul's Valley each June to compete in bare-handed catfishing at the Okie Noodlin' Festival.

Every June, the die-hard fishermen of Oklahoma and surrounding states troll the waters of Oklahoma to do a bit of fishing. However, these aren't your average fishermen, and they don't fish in the ordinary way. Instead, they "noodle" for flathead catfish. The goal? To catch the biggest catfish with their bare hands!

After catching what they believe is the absolutely biggest flathead, these fishermen bring their catch to Wacker Park in Paul's Valley for the big catfish weigh-in.

Up until 2010, the Noodling Festival was held across the road from Bob's Pig Shop. Now that the crowd has grown to over 10,000, a move to the city park was needed.

The Okie Noodlin' Festival is now held at Wacker Park, in Paul's Valley. Paul's Valley is a small town in Oklahoma, just south of Purcell, and north of Ardmore, off of I-35. To get to Wacker Park, take Highway 19 to Paul's Valley, and turn north on Chickasaw. Go over the railroad tracks, and the park will be right in front of you.

The park has public restrooms, a kid's play area, a picnic area, a jogging track and tennis courts. It also has volleyball courts, softball & baseball fields, and a pavilion.

Festival attendees begin arriving around noon, and stay throughout the day. Bring a lawn chair, hat and sunscreen with you, or the Oklahoma sun will make the day a miserable one.

Noodling is a type of fishing. Rather than use a rod & reel, you use your bare hands. Nothing to it!

To noodle, or hand-fish, you simply wade out into a lake or other body of water, or jump off the side of your boat. Then, bend down, and stick your hand into a catfish hole. The catfish will lunge at your hand, and swallow it whole! Your job? Just hold on tight to the catfish, and bring it on out!

Why is hand fishing called noodling?

No one really knows for certain. One idea is that when a fisherman tries to lure the catfish out of the hole, he may wiggle his fingers. The catfish will see the fingers as worms, or noodles. Another opinion is that when trying to handle a squirming, struggling catfish, it's as hard as handling a wet noodle.

Noodling isn't legal in all states. In fact, it's only legal in 11 of them. And in those 11, only a few of them allow noodling of all kinds. It's best to go to Oklahoma if you want to catch those cats bare-handed. Better yet, attend Paul's Valley Noodlin' Festival for a chance to see the biggest catfish of them all! That way, you don't have to worry about getting ticketed - or jailed - for pulling in your catfish!

If you'd like to see how noodling is done first-hand, you can view a fisherman catching a catfish bare-handed in the noodling simulator. Noodling is demonstrated a couple of times during the festival, and you can learn first hand how exciting - and dangerous - this sport can be!

This trailer has a box at one end with a catfish inside. The trailer is filled with water to resemble a river. A fisherman gets into the tank of water, swims to the box, and sticks his hand in to catch the fish. He doesn't always catch it the first time, and you'll find yourself rooting for the fisherman.. or the fish!

I've had the pleasure of attending the Okie Noodlin' Festival several times over the years. The event is just a few hours drive from home, and makes for an entertaining afternoon. It's an amazing, and amusing, festival, and one that you should attend at least once in your life. However, if you cannot attend for whatever reason, you can learn more about noodling with this DVD.

Bradley Beesley produced this film in 2001, and it showcases the art of noodling.  You'll meet some of the hand-fishers, learn how to catch flathead cats with your bare hands, and learn why these people fish like that do.  It is an interesting movie if you enjoy learning about different cultures and lifestyles.  And it is a bit amusing, as well!

The Rules of Noodling - at the Okie Noodlin' Festival

There are rules when it comes to submitting catfish entries in the Noodlin' Festival. In 2012, the rules changed a bit to make it more fair to all the fishermen. Following are the updated rules:

The Okie Noodlin' Festival centers around the weigh-in, which occurs at 6:00 pm. Make certain you've set up your lawn chair several hours in advance, so you can watch the fish as they are brought in. These fish are monsters, and can weigh 40 pounds or more!

The catfish are normally brought in large tanks, which ride in the beds of pickup trucks. The fish are brought out of the tanks, then put on the scale. A few fishermen may even hold them up high for all to see! After they are weighed, they are either put back in their original tanks, or put in large "viewing tubs" in order for attendees to view them more closely.

After all entrees have been judged, prizes are awarded. The fish are then returned to their natural habitat, put in stock ponds, or fried for dinner. It is the fisherman's choice.

Get ready to view some big flathead catfish! These videos show you how it's done!

If you want to attend the next Okie Noodlin' Festival in Paul's Valley, the following sites will help you plan your trip:

Have you ever noodled, or caught a fish by hand? Do you think this is a dangerous sport? Would you like to attend this festival? Please share your thoughts and comments here!

What is the largest catfish you've caught?

I have friends who do this, but I'm not brave enough! It is fun to watch, tho. 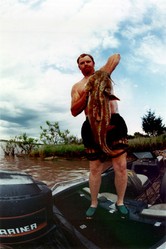 Okie Noodling: A Documentary by Bradley Beesley
100%  6   9 CountrySunshine
Other US Holidays

Grab some beer, put on some Country music, decorate your yard and offer a horseshoe game. There's more than one way to celebrate National Bubba Day on June 2nd!
100%  11   33 north_america
Fishing 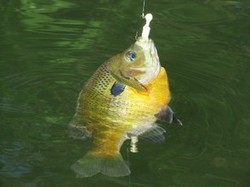