Orca whales are also known as Killer whales and sometimes called Blackfish. They are the largest species of dolphin and are fast swimmers reaching speeds of 55 km per hour.

Orca whales are very attractive animals with distinctive jet black and brilliant white or sometimes cream colouring.  They have a solid, though superbly sleek body ideally adapted to their marine way of life.   Their heads are rounded though taper towards the mouth and they have a white oval patches behind and above their eyes. The upper part of their body is jet black and carries a white or sometimes grey patch just to the rear of the dorsal fin.  The undersides, including the chin, throat and undersides of the tail flukes are white.

The males have a tall black triangular dorsal fin which can grow to around 1.8 metres in height.  In females and young males the dorsal fins are around 91 centimetres high and curved.  Though each individual can be recognised by its markings, the fin is often scarred or carries cuts and indentations that also help to identify individuals.

Orca whales are widely distributed inhabiting all the oceans of the planet though they seem to more numerous in cold seas and coastal regions.  They do not seem to migrate but seem to move to areas where food is available.

Orcas are an odontocete, or toothed whale.   Their mouth has 46-50 pointed teeth, angled inwardly and a little backwardly.   The top set of teeth interlock with the bottom which helps it to gain a biting grip on prey and also to bite, or tear it into smaller pieces.

Their diets vary according the geographical area, season and availability of prey which may be the reason for the evolvement of distinct different forms. Variations in appearance, behaviour, pod size and diet between the groups have been recognised.  In the North Pacific Ocean there are known to be at least three different types of Orca whale that are known as residents, transient and offshore.

Of the three groups these are the most frequently observed and are known to frequent the same areas along the coastal regions of the northeast Pacific Ocean.  Their diet is mostly fish and sometimes squid.

Transients have a diverse diet preying on marine animals such as penguins, elephant and harbour seals, sea lions, sharks, squid, porpoise and other small cetaceans, such as narwhales and belugas, though sometimes bigger ones such as grey and baleen whales are hunted.

These Orcas live and travel in small groups of 2-6   the coastal waters of the northeast Pacific. They are known to travel great distances along the coast with reports of some individuals being seen at different times in Californian coastal waters and in the waters off coast of southern Alaska.

This population was first recognised in 1988.   They tend to travel away from the shore into the open ocean hunting for schools of fish.  It is also possible that they prey on marine animals and sharks.    They are often found in groups of 20-75 though larger groups of around 200 individuals have occasionally been reported.  Many sightings have been reported off the coasts of the Queen Charlotte Islands and also Vancouver Island.  Offshore Orcas are smaller than residents and transients and the female dorsal fin tip is rounder.

Wolves of the sea

Orca whales are sometimes referred to as “wolves of the sea” because they often hunt in groups that cooperate and work as a team like wolf packs.  They are regarded as apex predators because they sometimes prey on large sharks and whales and have no natural enemies.

Poster of Orca whales at play

Information on the breeding patterns of Orca whales is scarce.   It is believed that mating takes place through out the year as newborn calves have been observed at many times of the year.

The gestation period is 13-17 months and a newborn calf will be about 2.1 metres in length and weigh around 400 pounds.

A Pod of Orca whales

Orca whales tend to live in social groups known as pods, often made up of several females with their calves and 1 one or more males.  The groups are often structured around families and may contain several generations living and travelling together.  Orcas make sounds and each pod tends to have its own dialect though there are sounds that are common with other pods and others that are unique to each pod.

Orca whales are found in the oceans all around the world and the total population is not known but experts estimate a minimum of 50,000 worldwide.   Like other species of whales they have been hunted by humans, but not with such energy as other whales have been hunted and they have no natural enemies.  The main threat to them comes from human activity and pollution of the seas with chemicals and toxins which may affect them directly or, indirectly, by killing the animals they prey upon.

Other articles by zteve on Wizzley

Yes, they certainly are amazing animals! Thanks for commenting

Orcas are amazing animals and I think killer whale, although sounds powerful gives them undeserved bad reputation. Great photos and a lot of amusing facts!

Thanks, very much appreciated!

Wonderful creatures. What a comprehensive page Zteve. Love the images

Whales don’t have gills that allow them to breathe underwater, so how do they... 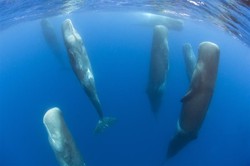 Whales don’t have gills that allow them to breathe underwater, so how do they sleep?
100%  19   10 MikeRobbers
Dolphins