There is a variety of pathways through the first stages of belief in God, and they vary according to the individual.

Sometimes we use the metaphor that belief is like ascending a mountain, for the route up to the summit can be varied and most mountains have several routes up them. Belief is like this, for when you study the ways in which people come to believe you see that no two ways are identical. But this is not to say that they have nothing in common with each other. Some people come to God through a profound moment of experience, and sometimes with much conflict and anguish, whereas others take a quieter, more scholarly route.

Like many non-believers Archbishop [metropolitan] Anthony Bloom was as a young man aggressively anti-religion and anti-God. But he did come from a religious family of Russian emigres in Paris, who had brought their Russian orthodox faith with them from Russia when they fled. How much Bloom's family background influenced his conversion is unclear. It certainly influenced his choice of church, but not the conversion itself. His conversion story is told in "We Believe in God" published by Allen and Unwin 1968.

The teenage Bloom declared that he was suffering a crisis of meaninglessness, and had decided that if he could find no meaning in life he would not live more than a year. But he still attended Russian youth organizations in Paris. One day the youth leader,whom he respected greatly, told the youngsters that he had invited a priest to speak to them. Bloom  was angered and said so, as were some of his fellows in the youth group, but the leader simply said that he would like them to attend so as not to embarrass him, so the young Anthony consented. Having sat indignant through the talk he went home to see if the gospels would support his monstrous impression of Christianity, chose the shortest gospel, Mark, then began.

I will use Bloom's own words. ".......before I reached the third chapter  I became aware of a presence. I saw nothing. I heard nothing. It was no hallucination. It was a simple certainty that the Lord was standing there and that I  was in the presence of the one whose life I had begun to read with such revulsion and ill-will." [We Believe in God, Allen and Unwin, 1968, London pages 25-26.] That it was no hallucination shows that the experience had what William James, writing in Varieties of Religious Experience, a noetic character, which means that it is a state not only of feeling but of knowledge, an illumination that carries an enduring authority.  For Bloom this was the real thing and it was a life changing event. He said later in the account that he had encountered Thou [the sacred transcendent other, my words not his.] This is reminiscent of Martin Buber's philosophy of religious experience [Buber objects to the word experience as it does not do justice to the reality of the encounter.] From angry disbeliever to archbishop and writer on prayer is quite a change of life, in which this experience was the first step. The experience saved him from the crisis of meaning that he suffered.

Bloom is a classic case of a person whose life is changed by a powerful religious experience. There seems to have been a minimum of intellectual preparation for the change, though he knew a caricature of Christianity and had a religious home. That he was so angry might indicate that he was sensitive to religion and was rejecting it, for we only become angry at what matters to us, so deep down he must have felt that Christianity was meaningful for him, albeit in a negative way. But none of this  explains the experience. Skeptics can explain anything away, but their explanations often serve to convince only themselves.

Like Bloom Lewis came from a Christian family,  Northern Irish Protestants, but he lapsed. However, unlike Bloom who had a powerful moment of revelation, Lewis' path to God came through a combination of influences before a revelatory moment.

Lewis, who returned to Christianity while a philosophy lecturer at Oxford, was never a materialist. He was an idealist, a believer in an ultimate reality, an absolute, accessible by reason and known non-personally.

But his path to faith  came from the transformation of his idealism and his shedding of prejudices, under friends' influence. Barfield helped him shed his anti-mediaeval prejudices, showing him that mediaeval should not be a term of disparagement, because ideas can go from fashion for bad reasons.  Another friend,Cogshill, challenged his anti-Christian prejudices that Christians were stupid and uneducated, for Cogshill was one of the most intelligent and well informed people Lewis had ever known.  A third friend, Tolkien, made him face up to his anti-Catholic prejudices learned from his Northern Irish background, which taught him never to trust a papist.

But there were writers whom he admired. G.K.Chesterton, Lewis considered the cleverest man alive, except for his Catholic faith.He was later to come to see that Chesterton's wisdom was integrally connected to his Catholicism. Reading Chesterton's Everlasting Man, a life of Christ, shook Lewis to the core. Moreover the Anglican poet George Herbert, who viewed life from the perspective of the Christian mythos, inspired but annoyed Lewis. Could he not do without the Christianity! But  Lewis began to feel that religious writers were somehow more interesting and deeper than non-religious ones, but he hung on to his non-belief, fighting a struggle with the presence that was growing closer to him and more intense.

Another moment unsettled  him. Having read Frazer's Golden Bough, which spoke of the Myth of the Dying and the Rising God, he heard a dyed in the wool atheist academic say that it was a rum thing, but that it seemed to have happened once. Again, Lewis' world-view became unsettled, but he persisted in his rejection of Christianity. Non-belief was becoming hard work.

The final moment came when alone in his study at Oxford he yielded to the presence that had been calling him. He had for a while become convinced that he was wearing an emotional suit of armour against the call of the divine presence, than in that lonely moment he surrendered, transformed his idealism and admitted that God was God. There were still moves to be made. He had at that moment converted to theism, general belief in God, but he was later to decide for Christianity. His book Surprised by Joy,speaks of the joy that comes with belief. This is not a state of excitement but of fulfillment greater than the travails of the moment. Strangely, having scorned Herbert's use of the Christian myth in literature, Lewis' transformation led to  his using it as the literary theme of the Narnia series, quite a turn around.

I was going to claim that Flew is an example of one whose path to God was purely based on philosophy, but having read something of his life I suspect that he is a good example of Kant's view that the power of the divine is felt in the force of conscience, for Flew is a man of strong ethical principles and firm commitment to truth. Together this commitment to righteous living and open minded philosophizing led him to return to belief in God, though he is a deist, one who believes in a non-interventionist deity.

The son of a Methodist preacher, he rejected the punitive God of the Old Testament [ a caricature really] and became an atheist,  writing books in favour of atheism, such as Theology and Falsification. But Flew was never a bitter atheist who hated God, he merely thought that God did not exist. Furthermore, he always believed in following the argument where it led. Moreover, when the Logical Positivists, a now defunct philosophical movement that believed that God talk was meaningless and not worth discussion were not even bothering to discuss religion, Flew rejected them and engaged in dialogue with religious believers. Thus an open minded atheist contributed to the revival of religious discussion at his university.

But his change of mind came from a consideration of the arguments. The space available prohibits detailed consideration of Flew's thinking, but he came to the conclusion that God exists from a consideration not of experiments and equations, but from the underlying structures that they map  [There is a God, chapter 10.] I will use his own words, "........the laws of  nature, life with its  teleological organization and the existence of the universe-can only be explained in the light of an intelligence that explains not only its own existence but the existence of the world." [ibid, chapter 10.]

He  was swayed by certain books, The Wonder of the World, by Roy Abraham Varghese, and The Rediscovery of Wisdom by David Conway. He also speaks approvingly of the role in his thinking played by the eminent scholar-bishop Neil Wright of the Church of England, with whom he engaged in discussions.

Scholar that he is, he concludes the book with the observation that some people clam to have made contact with the Infinitely intelligent Mind and he concludes the main body of his work with "I have not, but who knows what could happen next. Some day I might hear a voice that says "Can you hear me now." [ibid chapter 10]

There is no one way to God. You could expect that this is the case because we approach God from where we are in life, and as we are in different places, so our routes up the mountain will differ.

What I see in these three men is that they combined various elements in differing ways. There was scholarship, particularly in the cases of Flew and Lewis, a sense of being called or encountered, in the cases of Bloom and Lewis, and an open minded approach to new ideas, in all three cases.

I acknowledge that there are limitations in the account, for these are but three among many.They all came from Christian backgrounds, all were intelligent and well educated [Bloom became a doctor before he became a monk] and all were male. They were all public figures and authors, so perhaps there are many untold stories that would lead the reader through paths similar or dissimilar to these three. There are many tales to be told and not enough time to hear them.

frankbeswick, I like President Lincoln's statement that it can be easier to believe in God looking upward than around or downward.

I certainly must agree that the paths to God are varied. In fact, the diverse parts are so numerous that one must certainly have an opportunity to take one of them. 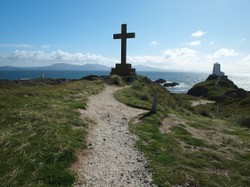