Raising swallowtail butterflies from very small caterpillars through thier cocoon phase and watching as they emerge and become butterflies.

A number of years ago I started an herb garden.  I do a little cooking with herbs, but mostly I enjoy the wonderful aromas of the herb garden.  One of the plants I have is anise.  It grows about 3 feet high and is very soft and wispy.

After that I started bringing in a few of the caterpillars and raising them.  I started out with one or two and learned about raising them along the way.  This year I brought eight little caterpillars in and later released eight beautiful Black Swallowtail Butterflies.

Caterpillars this size don't require much care.  It is very important when raising caterpillars to provide the exact food source as where they were found.  If found on anise, then they will only eat anise.  Fortunately my anise plant is big enough and fresh anise was always available for them.

When the caterpillars reach the right stage in thier development they look for a place to attach.  There they will become a cocoon.  The change takes about a week to ten day.

The above cocoon was a darker green during the deveopment phase.  Now you can see spots that are probably on the wings.  It won't be long now.

A few hours later the butterfly is strong and will be ready to fly soon.

The swallowtails are in my area in the spring.  In mid October the Monarchs come through on their yearly migration to Mexico.  They rest and feast on my fall flowers in New Jersey.  I have never found a Monarch chrysailis.  This year I planted some milkweed - just in case as that would be amazing.

Zazzle prints and posters are beautiful.  This swallowtail butterfly is only a few minutes old.  it is drying it's wings in preperation for flight.

The beautiful design of a butterfly wing is reproduced on a pendent necklace.

This is lovely! I like your photos that you used here to show the swallowtail butterflies in their different life stages.

Beautiful! Did you ever see the film 'Bright Star' and the room full of butterflies? The caterpillars for the swallowtail are actually quite pretty too. It's still a wonder to me how one changes into the other.

Lovely pictures. Makes me think I could possibly do it.

The blue morpho butterfly is a brightly colored butterfly that lives in the r... 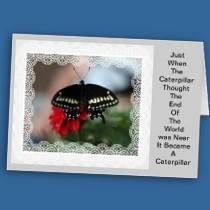 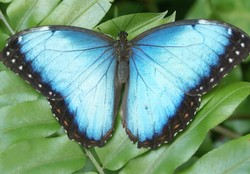 The blue morpho butterfly is a brightly colored butterfly that lives in the rain forests of Costa Rica.
100%  11   15 JoyfulPamela
Butterflies and Moths 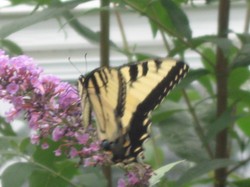 Butterflies signify beauty, freedom, growth, change, and new life. Their varieties come in many colors and sizes, but they are all amazing!
Loading ...
Error!