From the villages of Rural England to the Plains of Central Africa; from World War 2 in Europe to the Bush War in Rhodesia, this is the adventurous journey of an ordinary man.

I was born during World War 2 in a little village in rural England.  Of course, in those days I wasn't known as Ralpapajan but as Robin Thurman.

I started life in the shadow of the chimneys of a pig-iron factory and from the front garden the family could see Coventry burning after being bombed.  Living as I did in the Midlands of Great Britain at war next to a steelworks operating 24 hours a day, with four tall chimneys belching out acrid fumes and tall flames from the blast furnaces, it was surely to be expected that my life would be short.

It wasn't. In fact, the factory was never bombed during the war. It lasted until a Conservative Prime Minister killed off industry a few decades later on. So why didn't the enemy, the Nazis of Adolf Hitler, bomb such an obvious target? A target that was producing huge quantities of a material needed for the war effort? The reason was because it was so obvious. The steelworks ~ those "Dark Satanic Mills" ~ had the only four-chimney configuration in the whole of England. They could not be masked. On a clear night they could be seen from a few thousand feet up from the Continent of Europe. And the incoming bombers made good use of this phenomenon.

And so I survived the war.  My Dad was aboard the HMS Zulu when it was sunk off Egypt just after I was born but he too survived to come home four years later.

Together the family moved from William Blake's "Green and Pleasant Land" to a new country, a country less than 60 years old beyond the great, grey-green, greasy Limpopo, where the Elephant got its trunk, as it was called by Rudyard Kipling in his "Just So" story "The Elephant's Child". That country was called Rhodesia, the fertile bread-basket of Africa between the rivers, the Zambezi to the north and the Limpopo to the south. It was named after the British Adventurer and Imperialist, Cecil John Rhodes, who sought to conquer Africa from Cape Town in the South and Cairo in the North and bring it into the British Empire.

I spent my formative years there. Over thirty of them. And the memories of that country and my life there are manifest. The 'Fifties in Southern Rhodesia were a glorious time for a child growing up.

In 1953 the country became a part of the Federation of Rhodesia and Nyasaland.  Today the three territories are called Zimbabwe, Zambia and Malawi. The country supplied the British Commonwealth with its young men, who fought a war in Malaysia. The Royal Rhodesian Air Force flew out of Cyprus and Aden and trained with Pakistan.

I learnt to drive there, when I was 9 years old.  I learnt to overhaul and repair tractors and motor cars when still a child.  I also learnt to fight and kill for my country, though fortunately never had to kill.  I learnt all about the duplicity of politicians for I belonged to the ruling Party, the Rhodesian Front of Ian Smith, although he, in my opinion, was honest and sincere.

My autobiography is called Life's a Curve ~ My Way, for it records how I did what I did in the land I call my Motherland even though it no longer exists and I wasn't born there.  It is a small cameo of Rhodesia detailing, with warts and all, my life and my endeavours, mainly without success to shape my world My Way.

It covers my life at school, in the Army; in the Bundu ~ as we called the Rhodesian Bush; in Politics; in the Air Force and the BSAP or British South Africa Police; and finally during the Bush War of Rhodesia as we tried to save our way of life.  It might interest readers that two thirds of the racist regime's military forces were black, unique in the history of Africa.

It leaves out Religion in all its forms for I have yet to finally formulate my own beliefs that have become mine over many years.  I managed to study Christianity, Judaism, and Buddhism, and today I am oriented more to Nichiren Daishonin's Buddhism than any other religious belief, though I do subscribe to the teachings of the American Monk, Burt Goldman, and Abraham-Hicks and their Law of Attraction.

However, that part of my life is still in the relatively embryonic stage and will be the subject of another book.

Life's a Curve ~My Way has just been published in the Amazon Kindle Bookstore.

If you would like to ask any questions about Rhodesia, the Federation of Rhodesia and Nyasaland or Ian Douglas Smith, please feel free to ask

Most Titanic books end with the sinking. That's when this one begins. It's th... 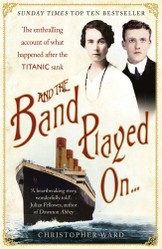 Most Titanic books end with the sinking. That's when this one begins. It's the shocking, heart-breaking story of two families left behind.
Loading ...
Error!