If faced with a national pandemic, martial law, food rations, anarchy and infected people ready to kill you – what would you do? You try to survive!

The Last Of Us takes place in the United States 20 years after a pandemic outbreak caused by a fungus called Cordyceps. The government set in the military to contain the uninfected in quarantine zones and euthanize everyone instantly that showed any signs of infection. All controlled areas are under martial law.

While on an investigation into a missing weapons shipment, Joel, a smuggler in his early 50s, and his partner-in-crime Tess is asked to make an unusual delivery to a resistance group called the Fireflies. A 14-year-old girl named Ellie has been bitten by an infected but instead of mutating like everyone else do, her body has developed an immune system that, in theory, could be used as a vaccine to prevent infection.

This article is spoiler free.

The Last Of Us is a survival-horror game that was inspired by a BBC documentary about the real Cordyceps fungus. The fungus infects insects, attacks their brain and takes control over their body. After the insect has died the body starts to mutate and eventually releases spores that infect nearby insects. The fungus is known to be able to wipe out full colonies of ants.

The game has also been inspired by the comic and TV series The Walking Dead (iMDB).

The Last of Us has a great story that feels very realistic, albeit slightly cliché by having a person (usually a child) that could be the "saviour" of mankind. There are no true bad guys or good guys. Everyone is out to survive to the best of their abilities and come up with reasonable yet highly questionable ways to do so. For instance during Winter, the third act, the duo encounters a group of people out on the countryside who sports an interest in hunting down trespassers, steal all their belongings and engage in cannibalism. It is a brutal awakening of what mankind could be capable of in a time of crisis.

The graphics are stunning and extremely detailed. There is something beautiful about the destruction of a city and nature reclaiming it year by year. At the same time it is quite eerie knowing that what you are looking at is quiet and empty, and full of death, aside for the remaining infected and random hunters aiming to hurt you – if they even let you live! And if the living won’t kill you there are plenty of other dangers that could.

The interface is extremely minimalistic with a health bar and gun icon in the bottom right corner, and the only time this is seen is when the directional pad on the controller is used or when in combat. Thinking about it, it fits perfectly. The game feels less of a game and more like an interactive film experience.
After reading this article by Naughty Dog UI designer Alaxandria Neonakis I am mighty surprised that the choices were made based on time constraints than anything else.

Joel and Ellie - from strangers to almost family

The relationship between Joel and Ellie starts off being very strained. Having lost his daughter during the outbreak and seeing humanity, himself included, turn into a selfish self-preservative entity just to survive day by day, he finds it very hard to care for anyone else. Ellie on the other hand is like a regular teen, she is chatty, smart and much more mature than kids who have not grown up in a post-pandemic environment. Ellie also has the same smart-ass attitude Joel’s daughter had and has no problem making use of various version of the F-word when angered.

As they travel their bond inevitably grows stronger to a point where Joel actually cares for Ellie and start seeing her as his second daughter. He becomes much more talkative and enjoys explaining the world as it was before the outbreak. All of this becomes very apparent during the Winter act.

This is also the act where events have such an impact on Ellie that her former outgoing self reduces into a more introvert, lost in thoughts self. It’s as if  ‘knowing’ that the world can be a dark place and actually ’experiencing’ that darkness caught up with her. Her insight becomes very apparent in the very last scene when she speaks the very last word ‘Ok’ after asking Joel if he lied or not.

Music and sounds make a game.

...and sometimes the lack of it makes for an even greater experience

The music in The Last of Us is spot on. It is for the most part calm and, in my opinion, gives the feeling of solitude and in some aspects despair. It’s the ‘lost in thoughts’ type of music.

Unlike other games I have played the music in this one doesn’t change to a fast-paced style when a huge battle is eminent, only when there are chase-scenes. The only way to tell something is about to happen is to listen for the buzzing of the console and looking at Ellie to see if she is hunched down with a weapon in hand. It adds tremendously to the suspense and I believe I spent more time sneaking and hiding than I did in any Assassin’s Creed game.

In an interview with Game Star the creative director and writer Neil Druckmann said:

“Typically, films and videogames use music to help define or enhance a mood. In No Country for Old Men (iMDB), the lack of music actually helped intensify the tension between the characters that was very palpable. Because creating an elevated sense of danger and tension was important to us, we took inspiration to use music only judiciously and find other ways to make your palms sweaty. This is just one example of how we’ve found inspiration from a variety of different creative mediums.”

The Last of Us: theme music

Weapons are a survivor's best friend

There's something disturbingly satisfying luring four Infected to a spot and hit them with a Molotov cocktail.

Joel and Ellie have a variety of weapons to use. Some are handguns and rifles, and some are handmade items from household tools and appliances. There is also a bow with arrows to use and a variety of melee weapons, such as 2-by-4s, bottles and bricks found on ground.
Joel can wear up to four holsters - two for hand guns and two for rifles and bow. Assigning a weapon to a slot is easily done (though not recommended during combat) by selecting the slot, pressing X and flip through available weapons.

The inventory space can hold very little so it is vital to keep a full stock of crafted ‘consumables’ (3 of each) and parts. This is especially important when playing on harder play-thoughs as the available household parts are more scarce.

Joel can pick up (gun) parts and training manuals that can be used to upgrade weapons and make them more durable and effective. He can also pick up supplements to improve his own performance.

It was a pleasant surprise to find out that none of the weapons seem to have been added “just for fun”. All of them have a use at some point in the game. Throw lack of bullets into the mix and the player has to make use of what he or she has.

The AI was advertised as being a cut above the rest with enemies reacting to the weapon in Joel’s hands and a sidekick (Ellie) reacting to the situation on her own without any of them feeling pre-programmed to react a certain way, but sadly that’s not what was delivered. Even though Ellie has the ability to pick up bottles or bricks and throw at enemies she can run around like a headless chicken right in front of an enemy without the enemy noticing her. That is incredibly stupid. At the same time it would have been extremely frustrating if they did notice her and ruined stealth mode.

What could happen if Cordyceps spread to humans?

We got tuberculosis, the flu and aids. Why not a Cordyceps strain?

So what do I think about The Last of Us?

I really enjoy this game despite some of the flaws. It definitely had me on pins and needles, especially in dark areas with only a flashlight (that I had to literally shake to life after some use by shaking the controller) as light source.

The character design is really well done and I just love Ellie, her comments and the way she walks off on her own or hop onto a desk while waiting for Joel to do his thing. Sometimes she would try to whistle and sometimes she would mimic a guitar solo by going “poow-pow-pooow”.

There was only one true annoyance in the game and that was the character Tess who almost always walked and stopped in front of Joel making it near impossible to move forward. Watching her in stealth mode was almost unbearable as she kept fidgeting and moving to check for threats in a not so stealthy way.

I truly enjoy how Naughty Dog utilise actors for all cut scenes (motion capture), voices and character design just like they did for all Uncharted games. A game feels much more alive this way, not to mention offering greater entertainment value when watching behind-the-scenes and interviews with the cast.

I truly hope that there will be a sequel - if not with Joel and Ellie then with Ellie and what she goes through after escaping the Fireflies; or perhaps a plausible side-story featuring other people with equally interesting storyline.

Have you played it? What did you think of it? 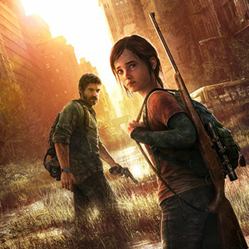