Royal Baby Museum is a Charmer

Can't get enough of the new royal baby? A trip to the Museum of Childhood will fascinate and charm you with many items that belonged to royal babies, from layettes to toys.

George is not the first royal baby to charm a nation and the world. In case one might forget previous royal babies, a little museum in northern London has carefully collected and displayed some of their most charming belongings. Being a seamstress myself, I was particularly blown away by the royal baby layette that was made for Prince Charles. The most delicate of fine hand embroidery and tiny details were painstakingly done by English citizens, in honor of the arrival of the new royal baby on November 1, 1948. Every little garment was beyond precious, and actually looked unworn and therefore still perfect. This royal baby layette must have had close to fifty pieces in it.

The Museum of Childhood is a gem of a museum, located in Bethel Green, London. It is not large but offers an extremely well edited display of sentimental baby items from over a century. It tells a story of how children lived and played throughout the past century. The displays include both what they wore and what they played with. Common everyday items that were produced for children to use are also included, such as dishes, silverware, and cups.

One highlight for royal baby fans would be the toddler size dolls of Prince Charles and Princess Anne. These were produced in the early 50's. Someone came up with the brilliant idea that with these dolls, aspiring royals could play with their royal pals anytime they wanted to. Charles still has all his hair and hasn't grown that big nose yet. They are too cute!

There are many, many toys; most that have been well loved and show it! From the life size pony complete with a real leather saddle and a bridle to the most delicate of bone china tea sets, these toys have a delightful story to tell about the innocence of childhood. I am a new grandmother and am determined to keep some of that innocence alive by collecting my own "grandmother's  museum" of vintage toys.

If you are planning a trip to London, and you are gaga over the new royal baby, do yourself a favor and take the tube to Bethel Green. The museum is right there and you will enter a magical world where children could be children, for a long time.

A book for all those royal baby watchers!

Start your own Royal Baby Museum!

Welcome to Wizzley, Peggy! I love that you wrote on London. The city is wonderful, and it has so much to offer. I keep daydreaming of going back there! It's a wonderful place to be! 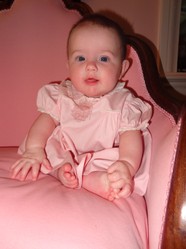