Take the whole family on a day trip to Ruggles Mine in New Hampshire. The kids can climb on rocks and explore while searching for rocks and minerals to take home.

Touring Ruggles Mine is a fun and very unique tourist attraction.
Mining mica and other minerals is an important part of the history of New Hampshire. Ruggles mine, in Grafton, was in operation until 1960, and shortly thereafter it became a tourist attraction. But the history of the mica mine is quite an incredible story.
Named after the man who laid claim to the land back in 1803, Sam Ruggles, wanted no one to know anything about his mountain of riches, namely mica. He went to great lengths to keep his secret, with good reason.
When you visit the mine these days, you'll still find loads of mica as well as other rocks and minerals that were once mined for use in various materials. The steep walls of the ravine show what is left from the cutting away. Over the more recent years, various companies mined for mica, beryl and feldspar. Ruggles Mine is a study in geology as well as mining.
It's a scenic drive out to Isinglass Mountain and then up to the top, where you'll find the entrance to the mine. I took my kids there one summer and the pictures on this page were taken then.

An Outdoor Attraction Nestled in The Mountains

This would be a fun day trip for the family. 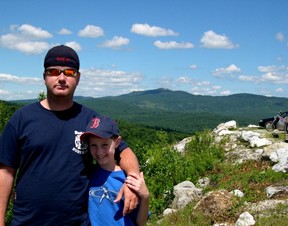 Known as "The Mine in the Sky", Ruggles Mine is located at the top of Isinglass Mountain, but the drive is not extremely steep.  It would be treacherous in winter I imagine, so it's open May through October only.
My first trip was as a chaperone on a field trip with my son.  He was in fourth grade.  We drove out though the countryside for miles it seemed, and then up an incline - where the bus actually got stuck!  When I drove myself, we had no such trouble.  This is a photo of my boys standing at the edge of the parking lot.  If you visit on a beautiful day weather-wise, you will enjoy some lovely views of surrounding Mt. Kearsage, Mt. Cardigan and Ragged Mountain.

The Mine is Located in Grafton, New Hampshire

A Tunnel at the Top Marks the Entrance to The Mine

This is a fun place for kids to rock climb and explore. 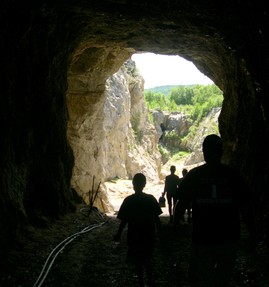 You will enter the mine area by walking down a fairly steep slope. It opens up to a large area of rock piles and carved walls, scattered with caves and tunnels. Most of the dug out areas are small and there is no chance of getting lost in a cave. Kids will love to explore the site, and it's a fairly safe place to roam and have fun.

One of the caves had water in it. Another had a very short ceiling so standing upright was impossible for adults.

Using a pickaxe is allowed in certain areas, but as I recall, chipping away at the walls is NOT allowed.

Walk all the way to the back of the mine for more scenic views of area mountains.

Have you been there?

No, I had no idea something like this existed in New Hampshire.

Yes, it was a great place to visit.

I took my kids there years ago. We loved it!

What You Need For Your Trip

Don't go empty handed or you'll miss out on the fun of the treasure hunt.

Hunt for your own collection of mica, feldspar, beryl and over 150 other minerals in these rocks and caves. Explore the tunnels and dig through the boulders for special gems, and you get to keep what you find.   (The staff sometimes hide little treasures for you to find.)

Bring a hammer or chisel and protective eye wear if you have them. Also a flashlight is helpful for exploring the dark caves. Be sure to bring a backpack or bucket for carrying your treasures home!  There is equipment for rent, I believe, but bringing your own is fine too.

Adults can enjoy the scenery while kids run and climb and collect treasures!

Identify and Collect Rocks and Minerals

Small pick axes and such are allowed for personal use within the mine. Contact Ruggles Mine for exact info.

Sam Ruggles Was a Secretive Man

But he had good reason to keep his mine all to himself. 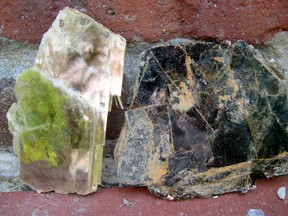 Sam Ruggles, the mine's namesake, was very secretive about his new found mica mine, and with good reason.  In the early 1800's there was a limit as to how much land could be "claimed" by individuals on a yearly basis.

It is believed that when Sam discovered mica on his parcel, he had no idea at first how widespread it was.  So he mined it, and claimed the land as he was allowed over the years.  If anyone else had discovered his secret spot, they could have claimed it as their own!

Mica was used in the early 1800's in place of glass. It forms in large sheets, which can be peeled apart. The heat resistant and transparent properties made it a very useful commodity.  Mica was in high demand, and Sam knew he'd struck gold (so to speak) when he found his mica mine.   He and his family were the only ones to work the mine.  They hid the pieces in wagons and moved it in the middle of the night so no one would see what they were doing.  He took the mica sheets to Portsmouth, on the coast.  Then he shipped it off to be sold in England which would not arouse suspicion as to where it had come from.

Others have mined here, after Sam Ruggles was gone, and in the 1930's the estimated dollar amount of the total haul of mica from the area was twelve million dollars!  With still more mica to be collected there today.

(Photo: White and black mica we collected on our visit.)

The Mine is Still Loaded With Mica and Feldspar 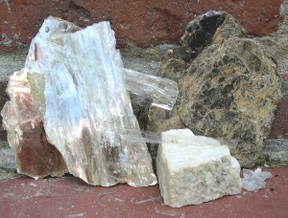 Mica is semi-transparent and each piece is made up of thin layers which can easily be peeled apart into very thin layers.  It's easy to see why it was used in place of glass in lanterns, stoves and windows.

In my photo here you can see black, white and pinkish mica as well as a chunk of white feldspar.  Rocks like this are readily available to collect at Ruggles Mine.

Our mica specimens are small, but the mica Sam Ruggles pulled out of his mine were huge, weighing over 100 pounds and as large as four feet across!
At the entrance to the mine, there is a little building with specimens of some amazing rocks and minerals that have been taken from the area.  The video of the history is also very interesting.

Uranium and Dangerous Minerals Have Also Come From the Mine

In the mine explorers can find white and black mica, feldspar, amethyst, garnet, and quartz - smokey and rose. But other, more unusual and prized uranium minerals have been found.

Radioactive minerals found at the mine include:

If you don't find any interesting gems or minerals, you could always buy some at the gift shop.

Books About Rocks and Geodes

Crack open a geode to find crystals inside.

A Playground Filled With Rocks

Any child who loves to explore and climb will enjoy the mine.  Adults should be in fairly good shape and be able to walk on uneven surfaces.  There is a fee to enter the mine, and as in most tourist attractions, there is a gift shop.

None of the caves are large enough to get lost in, but it's a good idea to keep an eye on the kids.  Make sure to go all the way to the back part of the mine where it opens up with a pretty view of the surrounding mountains.

Do you love New England?

I write about living in this area of the country on my blog.

Knitting The Neck Ribbing of the “Arco Iris” Sweater
Knitting the ribbing around the v-neck for the Arco Iris sweater pattern.

Does Ruggles Mine appeal to you?

This is my kind of fun. I have to get to this place one day.

When I was younger I enjoyed visiting an annual fair dedicated to minerals, but this is something completely different - a real thing. I had no idea something like this exists. Much better than amusement parks, in my opinion. Thank you for the introduction!

We visited there when my sons were young. Thanks for all the background information about the mine. Fascinating stuff!

Ruggles Mine has such an interesting background, and it's loads of fun to visit. Maybe you will get there one day.

Yes, I'm a stone freak! My father was a geologist and I live in Colorado and collect rocks. Thanks for introducing me to this place.

Dustytoes, Thank you for sharing your trip to Ruggles Mine. I enjoyed your tour. Mica is such a versatile mineral, and it's pretty as well. I like the way it glitters.

Great pictures, sounds like a wonderful place to visit!

Mira, I had fun at the mine and my youngest son loved the place. I find the history of Sam to be intriguing too. I always played with rocks as a kid, and still pick up interesting ones I find on my walks. Thanks for reading!

This is a fascinating story. I'm pinning it to my See the World board.

The Mount Washington Cog Railway, in New Hampshire, is an innovative and fun ... 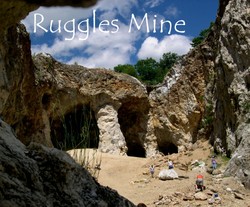 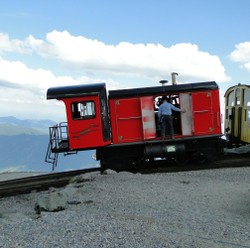 The Mount Washington Cog Railway, in New Hampshire, is an innovative and fun way to travel up the mountainside to the gorgeous view at the top.
100%  12   8 dustytoes
Road Trips with Kids