For a few days Northern England has held its breath as engineers strove to prevent a dam collapse.

It is unusual for the British authorities to evacuate a large part of any town,but this is what happened in Whaley Bridge, a peaceful, well-maintained town in the Pennine Hills, east of Manchester in early August 2019 as engineers ascertained that heavy rain was causing a dam failure, as the reservoir flooded to capacity and began to overspill. Engineers, police, fire services and the military were mobilised to prevent millions of gallons of water flooding down the River Goyt and thence down the Mersey river system and through parts of Manchester.

Image of Derbyshire courtesy of GaryC75, from Pixabay

Weather and the Dam.

Climate change predictions inform us that while south east Britain will suffer more drought, the north and west will be vulnerable to stormier conditions, and so it has come to pass.Storms seem to be getting worse and flooding is becoming more common.This is a challenge to the infrastructure, some of which was constructed in the 19th century. Several of our dams were erected at that time. The engineering was excellent, but we knew less then than we do now, and materials were not as sophisticates. Dams were constructed to meet the demands of the climate then, and we must ask whether or not some need upgrading. There is also the problem of inferior upgrades done at a later time.

Late July 2019 was hot, and that month had been Britain's hottest month ever. Days of heat across the East Atlantic caused evaporation of sea water into the warm air, but then a low pressure system took over, the air cooled and the water came down as torrential rain. Some parts of Northern England suffered minor flooding, though the dry ground soaked up the water, but the waters had done some damage to the Todd Brook Dam. All dams must have a supervising engineer  and an inspection engineer, who must inspect regularly, and when the latter performed his inspection he discovered damage. Concrete slabs that constituted an outer casing on the dam had been forced loose and a hole was developing in the dam wall. The Canals and Rivers Trust, who own all dams in England and Wales, were alerted, as were the police,and the emergency procedure was instituted

The town of Whaley Bridge is in a narrow valley with steeply sloping hills on both sides. It is centred on the river Goyt, though the dam, which is a small one, was constructed in 1831 as  a reservoir to feed the Peak Forest Canal at a time when canals were a major artery for commercial goods. Since then its industrial use has faded, but it has become a leisure resource for local people and a site of special scientific interest. But if the dam collapsed a mass of water would  deluge the pleasant little town and massacre many of those dwelling in the narrow valley bottom, before surging down the Goyt, thence to the Tame, a river in a heavily populated area, then down to the Mersey that flows through South Manchester [ a mile  from my house!] and to the Irish Sea.The most damaging flooding would be local, but it could involve great loss of life and severe destruction.

Engineers believed that the dam was in imminent danger of collapse and so the police advised local people to evacuate immediately. Some went to evacuation centres,others to friends and relatives. A few refused to move. Then the work to make the structure safe began with urgency.

The History of the Dam

The dam is pre-Victorian, having been constructed six years before Victoria took the throne.It was erected according to the best standards of the age, At its heart was a massive wedge of puddled clay.This is clay soaked and beaten hard until it is solid and impervious. Surrounding the clay was a coating of mud, which was stabilised by allowing deep rooting plants to grow on it. A casing of stones was laid on the side to be covered with water. Two concrete spillways were built on either side of the dam,one of which went straight, but the other had a sharp turn to take is water down to the river. This was to prove a weak point, though finding out took well over a century.

The dam owners purchased a coal seam which lies under the dam to ensure that it would not be exploited, leaving the dam fatally undermined.

In the years 1964-65 the dam was drained and strengthened,but the authorities were alert to problems and so in 1971 a major adjustment took place. It had been noticed that the water was spilling over the top of the dam, so a section of the top was trimmed to create a larger overspill, the vegetation stripped away and concrete slabs placed all the way down. The foot way across the dam was adjusted to form a footbridge over the new spillway. It was this 1971 repair that proved to be the weak point. Later repairs in the early years of this century that culverted part of the spillway to one side were performed. All looked well.

Or did it? Some local residents were concerned,for there was vegetation growing through the joints between the concrete slabs, indicating that water bars that prevent water penetration had not been used. We begin to see that all was not well.But the dam passed inspections and the alert was not raised.

Until the deluge. Water did not just spill over the new spill way in the centre, but came over the whole lip of the dam and its force ripped up some of the concrete slabs. Less seriously the overspill with a turn in it developed some flaws as water swirling in the bend began to damage the structure. We were facing an emergency.

The normal emergency procedure in the UK is run by a committee headed by the chief constable [head of police force] the local fire brigade chief, engineers where necessary, a senior military officer, the head of local health services and other co-opted persons. The senior military officer here was a Royal Air Force wing commander, because the air force were the main service operating, though there  was a  detachment of soldiers for support duties. There was even a diver hired to enter the dam for the purpose of taking the hoses of the giant pumps brought in by the engineers ever further into the reservoir as the water level fell.

There were several tasks to perform. Simultaneously they had to plug the hole and also to drain the reservoir. Draining was effected by diverting feeder streams [including Todd Brook] so that their water flowed either out of the catchment area or directly into the river. This was done by means of pipes, temporary dams and pumps.  There were two  purposes for this. The primary purpose was to take pressure off the dam, which was considered to be failing in its  structural integrity, and the lower the water pressure the safer the dam would be. The other purpose was that an eight metre drop in level was needed to enable engineers to inspect the dam. At the last news report that I heard we were down to seven point eight metres. At eight metres the dam will be considered safe. So we are almost there at the moment.

The other element in the strategy was for an RAF chinook helicopter to drop huge one tonne sandbags into the hole caused by the detached slabs. We have seen a masterclass in precision flying by the pilots. Soon, as long as the weather stays dry, grout will be poured into the hole to complete the process.But the weather has not always been clement. The worst of the rain has held off, but we are due a wet spell over the next few days.

We  are at the beginning of the next stage in the process.The dam must be thoroughly inspected and rebuilt to better standards than before. Legally the dam must be rebuilt as it is a site of special scientific interest for the rare mosses and liverworts that grow on is seasonally exposed mud and for the waterbird habitat that it provides.

Getting human life back to normal is urgent. Local people need to know when they can return to their homes. There is also the problem of when certain train lines will be re-opened, for they were closed because as they run through Whaley Bridge. One is the line connecting Manchester and Sheffield, a line on which I have often travelled. A major road between Manchester and the east of the country runs through the town,and it is better that it is re-opened as soon as possible.

Whatever happens we must salute the marvellous job done by the UK's emergency services, whose skills, courage and efforts have saved a town. But as the Duke of Wellington said of the Battle of Waterloo, it was a close run thing.

My daughter in law's family are from that area and she has uncle s and cousins there. But their part of Whaley Bridge was unaffected. The emergency services did a sterling job. They were tireless and superb .

As the dam is twenty two miles away from my house there would have been few, if any, ill-effects,though the Mersey, a mile away from where I live, would have swelled with floodwater. But the Mersey flood defences are excellent.

I sometimes travel on the closed railway line, but not at this time of the year, and, anyway, I have recently retired from the job for whose work I travelled that route.

So I was not affected at all.

As important as dams are, they restructure nature. The water would have moved along its natural course if unimpeded. Perhaps at too great of a flow, but not threatening a catastrophic failure all at once.

In ancient times mankind was nomadic, and would move away from a flooding river, so all would have been well. With structures this is not the case.

I hope you were not personally affected.

I do not know whether they were able to check for water bars, as the checking may have involved taking up the concrete.

The residents who did not want to leave stayed there, but any who left the forbidden area would not have been allowed back.

frankbeswick, Thank you for the practical information, the product lines and the updated prognosis below.
Did the previous inspection not have a way of checking whether water bars were present? What was done about the Whaley Bridge residents who did not want to leave?

Water level targets have now been reached. The dam should be safe! 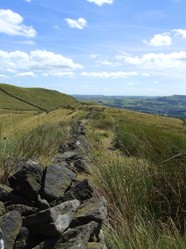