Pool and snooker have become subjects of increasing scientific study. As a result, there are new techniques for aiming and general play. Learn about these techniques here.

You may be haunted by visions of ghost balls while trying to aim in snooker and pool. Ghost ball aiming and trying to keep the center of an imaginary three-dimensional ghost ball in your head is mentally exhausting to say the least.

Someone may have told you that you can aim by reflections on the object ball, or by using marks on the table or cushion.

Suddenly, the game has become more difficult, less enjoyable, and more frustrating for you. For one thing, reflections move when we move; for another, when our concentration is not on the balls, we begin to lose our enjoyment.

In this article, we get back to the basics of geometry and physics in billiards to discover some surprisingly simple, and enjoyable, techniques for playing both games.

We also discuss a method of fractional overlap aiming, which I have developed over the last five years. 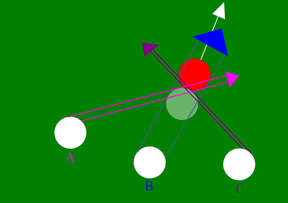 Look at the diagram on the left. The faint cue ball is frozen at the moment of hitting the red ball in the direction of the white arrow. The different colored arrows show the corresponding directions of aim from the three separate positions for the cue ball.

Notice that the degree of overlap that a player sees from the three positions is represented by the gap between those lines of the same color.

Aiming by the Overlap Method

When we want to hit an object ball in a certain direction, we need to hit it on the opposite side of the ball; this is called the contact point. Look at the contact point closely in the first diagram and you will see that it lies exactly in the middle of the different overlapping regions. To make this clear let's look at our second diagram. 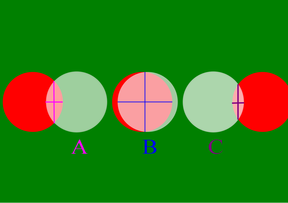 Here we see the image we should visualize while aiming. In the A, B, and C positions the amount of overlap changes but the contact point (cross-hairs) is located at the center of each overlapping region.

Our second diagram shows three cases that demonstrate this aiming method. We need to imagine the cue ball as an overlapping circle of the same size as the object ball. We determine the contact point on the object ball before we start to aim. Then, in our mind's eye we see the amount of overlap we need for this contact point to be at its center.

You can demonstrate the power of this aiming method for yourself. As you practice, keep your head still until after the balls have made contact. You will see the real degree of overlap for yourself, and you can compare this to what you had imagined beforehand. The result will tell you whether, you chose the correct contact point, or your aim is accurate. You will also learn if there is something wrong with your cuing action.

However, there is a paradox that some will notice: Those harder shots that involve thin cuts become easier to visualize using this method because the region of overlap is smaller and more sharply defined. Look at the near full-ball contact in example B, and you will see that with this amount of overlap it is difficult to determine its center. Because the overlapping region is symmetrical, the contact point is also located between the centers of both balls. So, in this case aim to sandwich the contact point between the centers of both balls.

Very often, players refer to ¼ ball, ½ ball, ¾ ball and full ball shots. By using this language, they are already showing how important the overlap way of aiming is. This simple and clear way of describing shots from thin to thick would be impossible using the ghost ball technique. These shots are described here by Ray Reardon, the six times World Snooker Champion and former coach of Ronnie O'Sullivan. However, are we limited to only four different types of shot by using the overlap method?

No, because as we have discovered, we can imagine any amount of overlap for any contact point on the object ball. Also, unlike the ghost ball technique, we only have to imagine two dimensions and not three.

The precision of our aim is only limited by how accurately we determine the contact point on the object ball. That contact point is on the equator of the ball and on the opposite side of the direction  in which we want that ball to move.

Important point! Notice in Diagram 1, that to see the contact point accurately, you must look between the lines and not over the center of the cue ball. This may not make much difference on long shots, but will affect the accuracy of shorter shots.

Try to look behind the part of the cue ball that will hit the object ball. Once you have estimated the contact point from this off-center view, you can use the Fractional Overlap Method to determine where to aim the center of the cue ball.

Aiming the Center of the Cue Ball

Look at the diagram above. Concentrate on the left hand ball. In this example, we have determined that we need to hit this ball at a point that is 1/6 of a ball’s width from the left edge. Now we know that this contact point lies in the middle of the overlapping region, so if we double that distance we come to the edge of that region. Then all we need to do is subtract half a ball’s width to find the centre of our imaginary ball, where we aim the cue ball.

Look at the other examples:

Remember to make the denominator an even number; for example, if you feel that the contact point is 1/3 of a ball’s width from the edge, turn this fraction into 2/6, because you have to subtract half a ball’s width at the end.

Grab a look at this handy device!

In the area of professional sports, many competitors have improved their performance by using mental visualization techniques. Jack Nicklaus admitted that this was the key to his success. He said that he never hit a ball until he had first played in his head a mental video of its flight, and even its bounce and roll toward the target. Golfers may be aiming towards a fairway that is eighty yards wide, and yet many go through this same mental exercise. Snooker and pool players are aiming at targets that are millimeters wide, so how much more so should they be using and benefiting from these same techniques?

By mentally rehearsing our shots in as real a way as is possible, we will focus our concentration. In an actual shot, there is not only a visual image of the contact, there is also a sound that accompanies it. That sharp "clicking" sound that comes with contact will help to enhance our aim. You can improve your feel for the shot by imagining that clicking sound coming from the precise point on the object ball that you want to hit. Just ask yourself when you are aiming, "If I cue the ball in the direction that I am aiming, will that clicking sound come from the correct contact point?" We need to keep in our minds that the balls are hard spheres that can only hit each other at one precise point.

This method does not need to be used on its own; you will find that it enhances the previous overlap aiming technique. I am sure that these two aiming methods will increase your enjoyment and feel for billiard games.

Aiming Adjustments Due to Cut and Spin-Induced Throw

Aiming to Miss a Scratch (In-Off)

Thanks so much, Bruce! Now I understand and have a consistent way of aiming. No more ghost ball for me.

It doesn't have to be Rose, but if you can add up the total for your friends' drinks in your head, this shouldn't be a problem. Thanks.

For a sport, snooker is surprisingly mathematical!

Just who and what are fueling the continuing "Sherlock" craze? Here we find ...

How do you go about buying a full size snooker table? Here we examine what we... 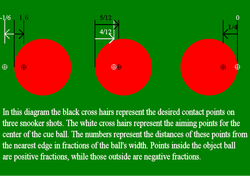 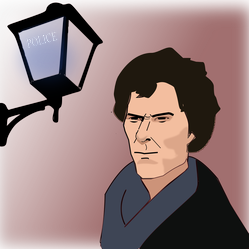 Just who and what are fueling the continuing "Sherlock" craze? Here we find out.
26%  2   3 Bruce-Bowden
Ball Games 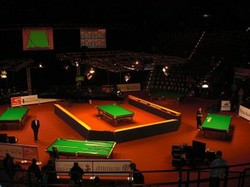 How do you go about buying a full size snooker table? Here we examine what we should be looking for in a good quality table, and where to find those bargains.
Loading ...
Error!