Spreading the Word About Saint Therese

Saint Therese was a French Carmelite nun who died in 1897, but she continues to become more popular with each passing year.

There is a popular Saint Therese prayer card in which people ask her for a favor, and then promise to help more people learn about her life. This is a good thing, because becoming more familiar with this remarkable woman can help us look at God in a new way.

Saint Therese viewed God as a merciful friend whom she could always turn to in time of need. He would always be there for her, and He would always pick her up, even if she had fallen. She had a very simple, childlike faith, in stark contrast to a heresy known as Jansenism, which had swept through her native France, and still hadn't completely gone away.

Jansenism takes a very rigorous approach to God, and views Him as a distant, cold and punishing Creator, instead of as a loving and forgiving Father. This heresy also makes it more difficult to get close to God, because we begin to fear Him. It also makes it harder to love God, because why would we want to love such a harsh Deity.

Anyway, Saint Therese seemed to be God's antidote to this heresy, because she had such total trust in His goodness and mercy.

This is part of the reason so many Catholics around the world have adopted Saint Therese as a patron, because her spirituality is so simple, yet so profound.

While she was alive, Saint Therese lived in a Carmelite convent, shut off from the world. As a cloistered nun, much of her day was spent in silence and prayer. She displayed great restraint when her patience was tested, as it was even in the convent. Sometimes she'd help an elderly and very crabby sister who criticized everything she did, even when it was done in a spirit of helping.

Saint Therese also didn't complain while doing laundry, when another sister repeatedly splashed soapy water in her face. Nor did she say what was really on her mind when she was in the chapel trying to pray, and another sister made a distracting clacking noise. Even though this prevented Saint Therese from focusing on her own prayers, she didn't say a word to the sister. Instead, she offered up this small penance as a sacrifice to God.

This was Saint Therese's "Little Way," of offering everything to God with love, instead of complaint, and it's something that many Catholics try to emulate.

Asking Saint Therese to Help Us

Catholics pray to canonized saints because we know they are in Heaven with God, and we believe they have his attention when we send up a request through them, similar to we ask our friends here on earth to pray for us. Except we believe the prayers of the saints are especially powerful because they are now so close to God.

People who request the help of Saint Therese do receive it. Sometimes, when a prayer is answered through her intercession, it's not answered exactly as we requested. However, the way it turns out is always for the best, since she has the vantage point of being in Heaven, and she knows what is best for us.

There is also a pious belief that when one of our prayers is heard, Saint Therese will send us a rose in one form or another. (It might be paper, or you might see the word "rose" written somewhere, instead of receiving a real rose.) This is based upon a statement she made before her death, in which she promised to send a shower of roses from Heaven.

Saint Therese wanted to help people know how much God loves them and for them to view Him as a kind, benevolent Father. We believe she continues to do this from Heaven. After her death, copies of her autobiography, Story of a Soul, was published shortly after her she died, and then translated into many languages. People around the world have read this book, and are trying to model their spirituality after hers.

Many people from many nations have gotten to know and love Saint Therese, even though she lived a very secluded life in a Carmelite cloister, far removed from the world. She died from tuberculosis in obscurity, at age 24. But less than 30 years after her death, in 1925, she officially became a saint in the Catholic Church. Then, in 1997, she received another distinction, when she was made Doctor of the Church. This is a title reserved only for those considered to be very spiritually and theologically advanced.

Your Godmum must pray for you. That's nice to have a Godmother like that.

My favorite saint is St Jude, but St Therese is probably not far behind if I'm honest. I'm firmly liberal Anglican but that doesn't stop me from having elements of Catholic belief after a Catholic secondary school education and still having a Godmum who is fiercely Catholic.

The saints certainly do that. Saint Therese is probably my very favorite saint.

I really like Mother Theresa. I just read more about her, and how she was so driven to help people.

Hi Abby, I'm so happy you like reading these Catholic pieces. Thanks for reading.

Yet again, another concise, well-written article from you. I think that you do a good job in exploring and revealing the devotional and hagiographical side of Catholicism. For those unfamiliar with the term, hagiography means holy writing, and it deals with the stories of saints.Another Christian term is witness. In Christianity witness is what we do when we live well and give example of faith to others. The saints give witness to their faith.

I am marveled at Saints who come to birth in the world across all religions around the world to teach is humanity, generosity and benevolence. Saint Therese reminds me of Mother Teresa who made India her destination and home.

I really enjoy reading your catholic articles. Even though I'm a Protestant, I can still find a nugget of information or spiritual aspect I can relate to. 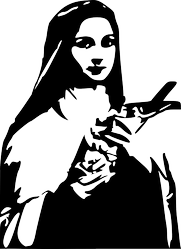