The Star Wars Lego A Wing is based upon the A-wing starfighter from the Battle of Endor in the movie The Return of the Jedi.

The A-Wing Starfighter was a set released in 2006 and is based upon a spacecraft seen briefly in the movie "Return of the Jedi". The set contains a really cool starfighter and two Rebel mini figures.

In this page I will show you the LEGO A-Wing, tell you a little about the spacecraft and point out some of the features of the set.

Enjoy reading about this Star wars LEGO set and please leave a comment at the end. 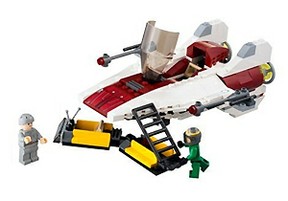 The A Wing Interceptor starfighter was one of the fastest and most maneuverable fighter spacecraft in the rebel fleet, requiring highly skilled pilots to fly them into battle and attack enemy spacecraft - it was used in the attack on the second Death Star.

Two large thrusters powered this small cockpit through space and the small size allowed only the slimmest rebels to pilot it.

Rotating laser canons, which were also controlled by the pilot, allowed for all-round covering fire and enabled pilots to open fire on persuing Imperial fighters in star fights.

In the Star Wars movies the A Wing starfighter can be seen in a few shots in the Battle of Endor, in the movie Episode VI; The Return of the Jedi, and it is most obvious when one crashes into the bridge of an Imperial Star Destroyer and bringing it down to the cheers of the rebels; you can see it in the video clip on the right.

Interested fans can learn more about the A Wing fighter in Wookiepedia's RZ-1 A-wing Interceptor page.

The Lego A Wing 6207 is an interesting model to assemble, relatively simple, for ages 7 to 12 (and of course older fans) which measures around 11 inches once completed, in a cool red and white colour scheme.

This Lego starfighter is a smart and sleek design and reflects quite accurately the design of the A Wing as seen in the Star Wars original movies and is armed with rotating blaster guns.; a great addition to any fans' Lego rebel starfleet.

This 194 piece Lego set has a couple of other interesting features; a small cargo hold with opening door and opening canopy so that the pilot can be placed inside the ship. A rebel cargo speeder is also included with this set, which is driven by the rebel technician.

What Do You Think Of The Star Wars Lego A-wing?

If you are a fan of the Lego versions of Star Wars starfighters then take a look at this page - Lego Starfighter Collection - where a large number of these Lego spaceships can be seen and purchased, including the famous X-wing fighter from the original movie Episode IV: A New Hope.

Lego Slave 1
The Star Wars Lego version of Boba and Jango Fett's bounty hunter spacecraft - the popular starship seen for the first time in The Empire Strikes Back.

Plo Koon Lego Starfighter
Fly Jedi Master Plo Koon into battle in his very own starfighter. This is one of the best value for money Star Wars Lego sets available.

Ewok Legos
Attack the invading Imperial Scout Troopers with these Lego Ewok mini figures and create your own Battle of Endor.

Hoth Legos
Imperial troops have entered the base! Recreate the battle of Hoth with these Hoth Lego sets.

Asajj Ventress Lego
Asajj Ventress is the Sith acolyte that is obsessed with killing Jedi - this is the Lego mini figure based on the character.

Lead your LEGO Mandalorians into battle with Pre Vizsla and his fighter; The ... 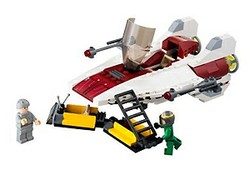 Star Wars Lego minifigures and sets based on the battle of Geonosis from the Star Wars saga.
27%  0   4 nickupton
Lego 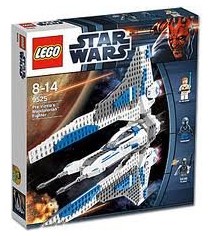 Lead your LEGO Mandalorians into battle with Pre Vizsla and his fighter; The Gauntlet.
Loading ...
Error!