Stop Running Bamboo From Spreading Out of Control

Bamboo is the world's fastest growing woody plant. There are about 1,000 species worldwide and several hundred in the United States.

Before you plant bamboo, decide what you want to do with it and choose between a running or clumping species.

Running bamboo is an excellent screening plant for privacy between properties because it grows and spreads quickly. But if you plant running bamboo, you'll want to learn how to create barriers to keep it in place or it can take over your yard - quickly! And if you already have running bamboo growing out of control, read further to learn how to kill or contain it

I lived in Illinois, Missouri, and Tennessee and running bamboo is common in all three places. It can definitely get out of control, but it is useful, too.  I've seen it growing around ponds and it helps to keep the bank from eroding and provides shelter for birds and frogs.  And my cousin cut some thicker bamboo shoots and made wind chimes from them.  And of course, you can cut them and make fences without having to worry about the plants spreading.

I took all the photographs of bamboo for this article. ~~ Burntchestnut 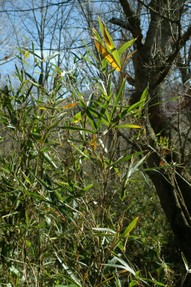 Bamboo has three growth spurts each year. The first is in April and May. Within a month or two, the new shoots will grow into full-sized stems (culms). In June and July, the older existing culms start dropping their leaves and begin growing a new set. In late summer, the grove extends its horizontal root stems (rhizomes), which is how running bamboo spreads.

In the first few years, a new planting of running bamboo spreads slowly, but then their growth and spread picks up. Each additional year, the new culms grow taller and larger in diameter. The culms in the middle of a grove grow larger than the ones around the perimeter.

Running bamboo can be used for a privacy screen between properties. Although it can get out of control, you shouldn't have a problem if you plant it properly with rhizome barriers.  A concrete sidewalk is not a good barrier because the rhizomes can go under it and spread to the other side; you need a barrier that goes straight down into the ground.

If you only need a short screen of bamboo, you can place each running bamboo plant in a large pot where it can't spread. You can place the pots all in a row and space them according to how thick you want your foliage to be. This will be expensive if you buy them all at once, but bamboo is easy to grow and lives a long time.

NOTE: Bamboo can be used to prevent erosion on hillsides and ditches.  And it grows well around ponds and make great fishing poles.

Other Ways to Get Rid of Running Bamboo 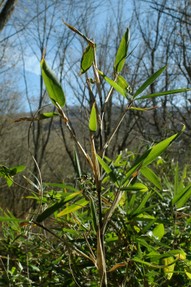 NOTE : If your bamboo grove is shared with a neighbor or has spread into his yard, ask whether he wants to keep his bamboo or get rid of it. Whatever you do regarding your rhizomes will affect the bamboo in his yard, too, unless you separate the grove by cutting the connecting rhizomes and create a rhizome barrier.

Cut the entire grove to the ground. The rhizomes are weakest in the spring. The bamboo will grow again, but don't cut it until leaves appear on the culms (stems). Keep cutting the grove each time new leaves appear. Starving bamboo may take a year or more.

You can speed up the process by watering and fertilizing the area to make the bamboo grow faster. Mow the bamboo each time new leaves appear and fertilize again. Each new growth cycle gets weaker until the bamboo stalks start looking more like thick grass. You can finish killing the bamboo by soaking the area with a 20% vinegar / water solution or other organic herbicide.

DIG BAMBOO OUT OF THE GROUND

If you're in a hurry to get rid of bamboo, dig it up using a mattock and spade. Bamboo rhizomes usually don't grow deep. Use the pointed mattock to loosen the thick rhizomes from the ground and then the spade to lift them from the ground.

Cut the bamboo to the ground and fertilize the area with a high nitrogen lawn fertilizer. Cover completely with clear, plastic sheeting and use something heavy to hold down the edges.

This method works best during the hot summer because the sun will cook the bamboo in the ground. Leave the plastic there until you're sure all the bamboo is dead.

Herbicides don't work well on bamboo because it is difficutl to get the herbicide all the way down to the rhizomes.

If you're going to do this, it's best to have someone to help you. Pour herbicide into an open container and have a small paintbrush to paint it onto a bamboo shoot.

One person should cut the shoot six inches from the ground and the other person paint the herbicide onto the shoot quickly before the sap retreats back down into the rhizome. It only takes about 15 seconds after the bamboo is cut for the sap to retreat into the rhizome.

You Can Eat the Shoots from Running Bamboo 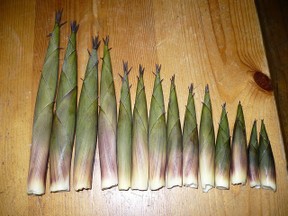 You can boil and eat the underground shoots of running bamboo.

Bamboo shoots should be harvested before they grow one foot tall. The shoots are similar to to asparagus and corn in taste and texture. You can store fresh bamboo shoots in the refrigerator for about two weeks. Don't leave the shoots out in sunlight.

If you don't grow your own bamboo, some farmers in the Pacific Northwest are growing them for sale at Farmers' Markets, usually in the early summer. And of course, you can buy canned bamboo shoots.

Watch This Video About Growing Edible Bamboo Shoots (there's a short commercial prior to the video) Courtesy of GardenGuides.com

Bamboo Has Many Uses

Bamboo is an amazing grass and you will be surprised to know how useful it is. Tender bamboo shoots is a delicacy, we make curry out of it. Bamboo is also used for making paper. It is one of the fastest growing species in the planet and is used for various purposes. Providing, shelter, house and furniture too.

Marie - there are good used for running bamboo such as helping to control erosion, but it's not so good in a residential area.

My sister could have done with reading this a few years back. She had big problems with bamboo spreading which is luckily now all under control. The root barriers are a great idea for people wanting to keep it contained.

happynutritionist - you can dig up the roots to that bamboo growing alongside the road for free. Did you read cazort's comment below about giant cane? It is a bamboo-like plant that is native to North America.

This is helpful...we discovered that there was Bamboo growing along the side of the road near our town, right up through the snow, all winter, and it was still green, recently has yellowed. But, I am planning to buy some and put it in two spots on our property for privacy, and appreciate the tips on how to keep it under control.

One oddity about grasses that enables their spread is that unlike most plants, which grow from their tip, grasses [including bamboo] grow from just above the root. So chopping them down does not prevent growth. You have to get at the roots. Furthermore, they spread by rhizomes, underground lateral stems that spread widely. All rhizomaceous plants have a powerful tendency to spread. So if you plant bamboo in your garden, you can guarantee that it will spread to other gardens.

cazort - I didn't know about the cane, Arundinaria gigantea, that is native to North America. It's always best to plant native species. I can certainly understand homeowners being aggravated when a neighbor's bamboo invades their yard. It's too bad most homeowners don't understand how their plants and grasses affect the environment.

Here in San Antonio, the Botanical Gardens has native plant sales each year, which also needed to educate people on what to plant that doesn't need much water. We've been on water restrictions (lawn watering) for years.

I wouldn't ever plant bamboo outside its native range, because of how difficult it can be to control.

One thing to consider is that it can create legal liabilities for you. In the neighboring township to where I live, I've heard of people being fined thousands of dollars (with ongoing fines charged per day) for bamboo they planted, spreading onto neighbors' properties.

I also would be reluctant to buy a property with bamboo growing on it--the reason is that I'd want to remove it ASAP if I owned the property, and I realize that removal would be costly and/or labor intensive, so it would effectively decrease the value of the property because it would be something I'd have to pay for out of pocket.

Do you know about giant cane, or Arundinaria gigantea? It is a bamboo-like plant that is native to North America. It was decimated by European settlers to North America, and it currently exists only in smaller populations. By planting the native giant cane, you can help to restore and protect ecosystems. It creates habitat for numerous native butterflies and birds, and like bamboo, it has many uses by humans too. Non-native bamboo will create an ecological dead zone--you can have a very similar looking plant (some people can't even distinguish them) but have a much more positive ecological impact by planting the native giant cane.

Thank you for this information.

frankbeswick - When you mow bamboo over and over again, you'll eventually kill it as each new growth comes up weaker until it ends up more like a grass without stalks. But this process can take up to a year. If you fertilize the bamboo, it'll grow up faster so you don't have to wait so long between mowings, and then you'll end up with the weak bamboo that you can kill off with a vinegar solution.

Using glyphosate is one way (and a faster way) to kill bamboo, but to do it properly, you'd want to use a brush to paint it on the stems so the chemical doesn't leach into the ground as much. I don't like the idea of using chemicals in the ground.

Personally, I'd chop the bamboo to the ground, mow it, and then lay some heavy cardboard or carpet scraps over it and weigh it down with bricks or heavy rocks. But some people might not want to do this because it won't look nice while waiting for the bamboo to die.

Jimsonweed is from the potato or nightshade family and is also called Thorn A... 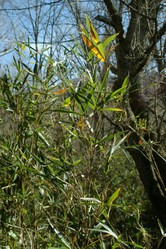 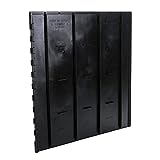 After saffron, vanilla is the next most expensive spice. Since pure vanilla is so expensive, most vanilla flavorings and scents are made with imitation vanilla.
23%  2   2 AngelaJohnson
Weeds