Bluebonnet - The State Flower of Texas

"The bluebonnet is to Texas what the shamrock is to Ireland, the cherry blossom to Japan, the lily to France, the rose to England and the tulip to Holland" -- Jack Maguire

The bluebonnet wildflower is about 12 inches tall and blooms in early spring throughout central and south Texas. It gets its name because of its blue color and because its petal looks like a woman's sunbonnet.

In 1901, the Texas Legislature declared The Texas Bluebonnet (Lupinus texensis) the official state flower. Texans love bluebonnets and other wildflowers so much, people post on blogs and social media where the best displays can be found each spring.

Texans look forward to spotting fields of bluebonnets and along roadsides. It's a tradition to take your children's pictures in a field of bluebonnets. 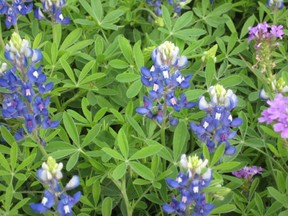 The State Flower of Texas is the Bluebonnet, written as one word.  Lupinus texensis is the species most often listed, but all bluebonnet species are considered the Texas State Flower.

The Texas Bluebonnet is endemic (native) mostly in the state of Texas.  It grows in full sunlight, and grows in uncultivated areas.

There are also white and pink bluebonnets that grow in nature.  White bluebonnets are rare, and pinks ones are even rarer. Now there are maroon bluebonnets, although they were developed by two horticulturists, Greg Grant and Dr. Jerry Parsons.

If you want to buy seeds or plants of the white, pink or maroon bluebonnets, be careful where you plant them.  If you plant them close to blue bluebonnets, they might naturally revert to their blue color, or the colors might mix because cross-pollination.

Plant Bluebonnets in the Fall, not Spring

Bluebonnets should be planted from early September to mid-November, although a little later will probably be alright.

Bluebonnet seeds need time to germinate and grow during the winter months before blooming in the spring. Bluebonnets need full sun, and well drained and alkaline soil.

Bluebonnet seeds can't just be tossed out onto the ground. The seeds are large with a hard coating  which has be be worn down by rain, decay, and abrasion before they can begin to sprout.

Everyone photographs their children among the bluebonnets

The Legend of the Bluebonnet Children's Book

"An ideal complement to Native American and Texas studies..."Booklist 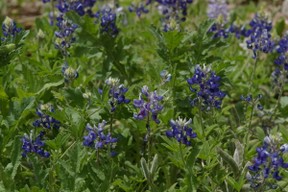 Since the 1930s, the The Texas Department of Transportation (TxDOT) wildflower program delays all mowing, except for safety reasons, until the wildflower seasons are over. This practice allows wildflowers and native grasses to grow.

The TxDOT buys and sows about 30,000 pounds of wildflower seed each year. Other Texas wildflowers include Indian paintbrush, winecup, primrose, Mexican hat, Drummond phlox, and prairie verbena, Tourists from all across the U.S. come to see the flowers in bloom each spring.

It's not illegal to pick wildflowers, but if everyone did, other people couldn't enjoy them and the plants wouldn't go to seed for the next year's season.  It's a Texas tradition to take photographs of your children in a field of bluebonnets, but don't trample them down and watch out for snakes and fire ants.

Bluebonnets are the Texas State Flower

Although I can photograph wildflowers and try to Identify them using the Internet, I prefer to have an identification guide book with me in the car.

Bluebonnets in a Field

Wouldn't it be Fun to Plant Wildflowers in a Field or Vacant Lot? 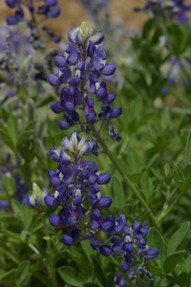 If you don't have room for a garden, build some raised beds or use deep planters.  Add at least 6 inches of soil, and add in some organic matter.  Keep the soil slightly moist.

You must lightly cover the seed or rake it into the soil before it can germinate. Don't add fertilizer because it will only cause more leaves to grow, but not more blooms. Some seed might sprout before 10 days, but other seeds might take a lot longer.

And don't be surprised if your bluebonnets don't do well the first year.  They have to go through a cold winter and sometimes this doesn't happen.

Be patient.  Once the plants are established they will become tougher and drought-tolerant.

Harvesting Your Own Bluebonnet Seeds

This photo shows blooming bluebonnets and you can see seed pods from plants that bloomed earlier. 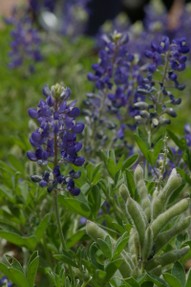 If you plant bluebonnets in a field or garden, you can let your seed pods open naturally to drop seeds for next year's crop.

But if you want to store the seed to plant somewhere else, the pods need to be gathered  before they explode and scatter the seed.  And don't forget - if you're growing white, pink or maroon bluebonnets, you won't want your seeds to mix in with regular  bluebonnets because their colors will probably revert back to blue.

Bluebonnet seed pods can be dried on newspapers and then opened to release the seeds.  The seeds MUST be thoroughly air dried so mold won't grow on them.  Moldy seeds won't grow.

Store completely dry seeds in a container that water (or pests) can't get in, such as a glass jar or metal can with lid.  Add a packet of desiccant (silica gel) to the container to make sure the seed stays completely dry.  Seed stored correctly will be good for several years.  If you're new to storing seeds, you might check on them from time to time to make sure they're staying dry.

Veronica - I'm glad you liked this page. Thanks for commenting.

frankbeswick - There are beautiful flowers all over the world - both cultivated and in the wild. Fortunately, we can enjoy flowers that are not from our own area through photographs.

Nancy Carol Brown Hardin - It's funny how we get excited over wildflowers, but it's such a happy sight.

Linda Jo Martin - Yes, bluebonnets are a type of lupine. They're one of the earliest flowers to bloom in the spring. Then we have Indian paintbrushes, primroses, winecups, Mexican hats, drummond phlox, and many more. I love driving around in the spring.

A delightful page. I had never heard of Bluebonnets before. They make a charming display and I like the link to native American culture too.

Thank you for posting this.

What a lovely flower! Texans are right to appreciate it.

Sadly, as you say,it grows in uncultivated, alkaline soil, so there is no way that I could import its seeds and grow them in my cultivated, slightly acid soil flower bed!

I've seen fields of bluebonnets as we've driven through Texas in the spring. They take your breath away with their beauty and the surprise of seeing such color in an unexpected place. Bluebonnets might grow elsewhere, but they sure don't have the glory of those in Texas. Thanks for sharing, I enjoyed this so much.

Wow - good choice for a state flower! Lupine is one of my favorite flowers - I've never heard of them being called Bluebonnets before - I guess it is just that variety.. right? In California you can often see hillsides with both lupine and California poppies, growing together.

happynutritionist - I know other states have their own state flower, but don't know if they are as enthusiastic as Texans.

CruiseReady - Bluebonnets are one of the first wildflowers to bloom in the spring. I'm so glad the department of transportation holds off on mowing until they're done blooming.

Sunflowers are so colorful, easy to grow, and don't need any special treatment. 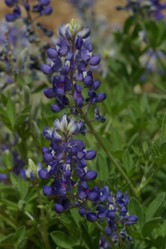 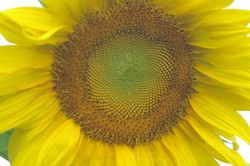 Sunflowers are so colorful, easy to grow, and don't need any special treatment.
74%  3   9 AngelaJohnson
Weeds