Salt is one of the most basic and also most important seasoning elements in many cuisines around the world. But how good are your "salt skills"?

In my many years of experimenting with and enjoying cooking, I've come to the conclusion that one of the most difficult kitchen skills to learn is how to properly season with salt. Salt can absolutely enhance and sharpen the flavor of any dish, from a hearty bowl of soup to a beef steak - even a "Sweet and Salty" dessert! (Have you ever had sea salt gelato, or chocolate-covered pretzels, for instance? 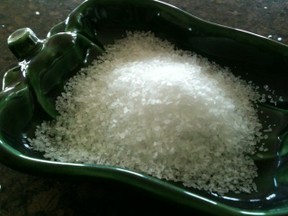 The problem is, as simple as seasoning with salt may appear, it can actually be quite a challenge so that your food doesn't end up either too bland or too salty.

Some chefs believe strongly that salt should be added - with care - to every step of preparing and cooking a meal. For instance, if you are braising a roast, first you might sear the meat with a salt-and-herb coating. Then you might add salt to the braising vegetables, then to the braising liquid, and lastly to the final roast before serving to "finish".

Food Network star Chef Anne Burrell is rather notorious for her fondness of salt and salting throughout the cooking process (foodnetworkaddict.blogspot.com/2008/07/anne-burrell-gets-salty.html). And of course, most Italian chefs will tell you that you simply must generously salt pasta cooking water as it will later allow the flavors of the sauce to better penetrate and enhance the noodles. (No salt in your pasta cooking water = no taste to your pasta!)

Other chefs take a much more cautious approach to salt use, only adding it as a finishing touch once all other ingredients are cooked down, seasoned and finished. Marcella Hazan is one of my favorite cookbook chefs, and many of her recipes seem to follow this principle of primarily adjusting for salt at the end of the recipe. Of course, she may use salty ingredients early on such as canned anchovies or capers and and olives in brine, which add a strong degree of saltiness on their own.  Similarly, many Asian dishes use soy sauce, fish sauce and other fermented or preserved ingredients which contain plenty of salt on their own. In such cases adjusting for salt may only be proper at the very end.

I definitely believe many slow-cooked, multi-layered dishes benefit from salting throughout; it leads to a rich and complex flavor and if you are constantly tasting and adjusting, you are less likely to accidentally "over-salt" or under-season a meal. Other simpler foods and dishes definitely may only need a touch of salt at the end, as too much might obscure the other delicate flavors to be highlighted.

I know it's taken me many years of practice to pay attention to and know when salt is needed, and to not over-salt (which almost without fail can't be easily corrected for.) I still don't always get it right, but I'm bolder with my salt use than I once was, especially growing up in a family where one person had heart issues which restricted him to a low-salt diet. For a long time I was extremely cautious about using salt more than a sprinkle or dash in my cooking, but these days I push myself to be bolder - to salt almost "to the edge" of too much, sometimes, which can really heighten the taste of a dish.

Salt: Is it your friend or foe in the kitchen?

I've only just begun experimenting as well with flavored, smoked, and specialty salts which are often meant mostly as a finishing element on a dish, or to add a unique note to a marinade. Many of these are starting to become more and more popular in specialty food markets and spice emporiums.

Want to try out some different specialty salts in your own cooking?

An Introduction to Finishing Salts

Learn more about the history and importance of salt in cooking

What do you think about cooking with salt? How do you like to use it in your cooking, if at all?

I also think that salt can be a key factor in how good tastes. There's like, a sweet spot where it's just enough and not too much, and it varies a lot from one person to the next. I tend to prefer less salt than the average, I think, but it really depends on context.

I also think that some foods taste good with a heterogeneous salt distribution (like a pretzel with big pieces of salt on it) whereas others taste better when it's more uniform. I've even noticed a few soups from traditional cultures where the soup broth is not as salty as Western soups, and there's a bowl on the side that has salt (and usually other spices) that you can dip items in. I actually rather like this, as you can dip pieces of meat or veggies in the salt to make them taste saltier, but the broth itself stays mellow and then you can drink the whole broth easily at the end.

I also was recently introduced to the idea of using salt in baked goods more assertively. One of my friends puts more salt in brownies and cookies than most people do, and I actually have come to enjoy it. It's not enough to make them taste salty, but just enough that it adds something. Since she brought it up, I notice that subtle differences in the amount of salt can make a big difference in how baked goods taste, even ones that I normally think of as sweet and not salty.

Start with a taco dinner kit in a box, and turn it into something fancier - a...

Make Professional Quality Artisinal Pasta At Home With the Lil...

The Lillo Due Pasta Extruder by Bottene in review. This professional quality ... 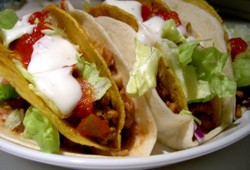 Start with a taco dinner kit in a box, and turn it into something fancier - and tastier - with a few simple tricks and recipe ideas.
51%  8   3 sockii
Specialized Kitchen Tools 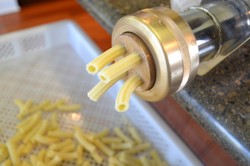 The Lillo Due Pasta Extruder by Bottene in review. This professional quality machine will allow anyone to make artisinal extruded pasta in their home kitchen.
Loading ...
Error!