The Berwyns: a lonely, but beautiful range

The Berwyn Range, south of Snowdonia, is often overlooked in favour of its northern neighbour, but there is good, though challenging walking.

Wales is mountainous and there are several ranges besides the better known ones, and while the Welsh coast provides some of the best coastal recreation in Britain, the interior blesses thoughtful walkers with some of the most glorious trekking in the island. The Berwyn Mountains, an expanse of heather and blanket bog dangerous in places, provide good walking paths along the summits of the range. There are fine views north,south and west into Wales and east to the English borders,for the range is not far from England, against the Norman kings of which land it provided a mighty bastion that once sent Henry the Second's army back soaked, muddy and dispirited.

A Land where Myths are at Home

Procopius, a sixth century Byzantine writer who had some dealings with English emissaries, took an interest in the distant island of Britannia; and he was somewhat daunted. In the west of the island, beyond the wall of Severus, lies a land of serpents, vipers and wild beasts, where the souls of men are brought, he declares. He had certainly his Geography wrong, as he confused the area with Scotland and he wrongly located Hadrian's wall, but the place where the Celts thought that men's souls were brought was the Berwyn Moorlands, on the borders of Wales, where the ancient Britons believed that the gateway to Annwn, [pronounced Annuvin] the realm of the dead, lay.  On these sparse moorlands, the Cwn Annwn, the hounds of Annuvin. hunted,seeking souls of the dead roaming in the mist to hound into the underworld.

Look at the image below and enjoy Pistyll Rhaeadr, one of the seven wonders of Wales. This is a beautiful waterfall that drains the moors on Moel Sych towering above it, but for the Celts it was the gateway to a mysterious land. Not for nothing were the moors known as Rhos y Beddau, the moors of graves. Annuvin lay somewhere up there, and the moorlands contained deadly traps, bogs into which you could sink chest deep. This was a land that featured in the myths of Arthur, a Welsh warlord who was at home in that region, to the extent that one of the places on the Berwyn Ridge is known as Arthur's Table [Bwrd Arthur.]

The Welsh were so convinced that this was a magical place that the legend that travellers across the moor could be met by Gwynn ap Nudd, a Celtic underworld deity believed especially at large at Samhain [modern Hallowe'en.] developed. He would offer them food, but if they took it they were swallowed up into his underworld, never to escape. There is a legend that Gwynn once on the Berwyn Moors tried to capture St Coll, but Celtic saints were used to this kind of thing, so he resolutely refused, and then saw Gwynn's palace fade away, leaving him alone on the moor. He became the patron saint of nearby Llangollen.

Don't be unnecessarily alarmed. There is good walking on the main paths, especially along the ridge. I have only once put my foot into a bog hole, and as normally is the case I was wearing light coloured trousers at the time. I never go into mud except when I am wearing light clothes. Some mischievous sprite is behind this, I suspect. ,

Pistyll Rhaeadr in its landscape

Pronounced Pistyth Ray ad er, this waterfall is a beauty, and I have often taken my family for a stroll through the woods and a walk up the Berwyns, and so far seen no hounds of Annuvin. The waterfall cascades down into a small wooded area that has an almost Tolkien-like character.  This is a site that has something for all walkers, those who wish to take on the mountain and those who want to enjoy beautiful woodland. Some like to stand in the waterfall and soak in its rejuvenating waters, and children sometimes splash in the pool. When the sun shines through the trees you can easily imagine water sprites at play in the mist thrown up by the 100 metre high cascade.

Looking at the waterfall, it is easy to see why the ancient Britons saw North Wales as a land of Faerie. The waterfall with its pleasant woods and its cloud of  spray and mist thrown up by the falling water is typical of faerie places, seductively beautiful, but behind it lurks danger, in this case the gate to Annwn on the harsh moors above it.

There is a small and lovely cafe near the fall, at  a site known as Tan y Pistyll.  I have mentioned before in my articles that my daughter believes that walks should culminate in an ice cream shop. Well, she recently corrected me: ice cream, or cake! It doesn't matter which, as long as it is lovely and creamy. I have a memory of her sitting in the cafe, with her face part hidden behind a large cream cake. But the cake could not conceal the smile of delight that said, "Walk over! What does a girl have to do get cream cake?"

There is a good walk up from Tan y Pistyll that takes you by a steep path to Moel Sych. The route goes on to Cadair Berwyn which means Berwyn Chair, and this is near to a cliff called Craig Berwyn. The height difference between the two mountains is one foot, so crossing the col between them means little loss or gain of height. You can walk on, but the path is indistinct and the route not circular, so you must retrace your steps, as  I did.

From Craig Berwyn the view shows you a land much of which can only be used for grouse moor, though sheep are also kept. Grouse are the only economically useful creature  that can cope in certain parts of this heathery range, so breeding them for shooting has to be a major option for landowners, whose land round there does not yield them riches.

Apparently you can force a route across moorland to the Dee Valley, but this is not a route that I know and I cannot recommend it. You are better off standing and enjoying the view, which shows you the Dee Valley, whose river will eventually flow down through Chester to the Irish Sea. Even the Dee is name of pagan origins, for it comes from the Latin word Dea [goddess.] It is easy to see why the Celts, looking at one side at the harsh moors thronged by Cwn Annwn and their underworld Lords, looked favourably upon the shining river and saw her as their mother, the Great Goddess.

Below the summits the land becomes very difficult, and you can see why the Romans thought it a dire place, somewhere their legions could not handle, where the Welsh who knew the terrain were at home and had the advantage. This area was never conquered by Rome. Like much of north and Mid-Wales the Romans merely fenced it in and placed a chain of forts to restrain the troublesome Britons. It is noteworthy that there are no Roman ruins in these hills.   There were no resources for Rome to plunder. The hard rock contains no ore, and as it is impermeable it retains surface water, creating the conditions for blanket bogs so deep that the unwary can sink to their chests or worse. At other parts the heather is uncontrolled and makes for a springy surface on which walking  is simply torture. There is no need for a tourist to go anywhere below the summits. I have only walked the summit ridge and enjoyed the view.

You can come to Wales as a casual tourist, taking quick trips to spectacular sights, or you can get to know the land more intimately. To do this you must walk ranges that are less well known than the tourist honeypots of Snowdonia. The Berwyns are such a range that shows you a fierce and unrelenting part of Britain, a mountain range that can seduce you in its beauty, but can wear you out with exhaustion if you treat it without respect.

If you go to Berwyn it is useful to drink deep of the well of Celtic myth, for then you see another dimension of the land. I don't think the way to Annwn lies on the Berwyn Mountains, and I do not expect to meet Gwynn ap Nudd. But if I do, I know now what not to do.

There is a suggestion that the name Rhaeadr is derived from the classical goddess Rhea, the mother of the gods. The Roman world was known for blending deities from different branches of paganism, so it is possible that in pre-Roman times the waterfall was named in honour of the Great Goddess, known under a variety of names, and she was later identified by some with Rhea during the Roman period.

Speaking of the goddess, Dea, the picture above shows the Berwyns viewed from the Dee Valley, the river being sacred to her in ancient times.

There is very little permanent snow in Britain, there being one small snowfield in a Scottish mountain corrie, and I am unsure how that will fare in global warming. We can get snow, and certain areas are snowier than others. Scotland gets it worst, and the mountain regions of Wales and Northern England can also suffer really heavy snow. Atlantic snow storms can hit Cornwall in the South West, and they have been quite thick.

A corrie is a small, bowl shaped valley at the head of what was once a glacier. By the way, my profile picture was not taken in Britain. It was in Norway.

I thought Britain was full of snow - how wrong I was. It looks like a very beautiful country, the Berwyns is just like you described - a land of myths, faeries and beauty. I would love to visit UK some day. It is in my wish list.

There is the Tees-Exe line, which is an imaginary line drawn from North-East England to South West England, the Tees and the Exe being rivers. North West of this line Britain is mainly higher ground [though I live in a lowland bit.] South East of it is mainly low. The line is said to draw a division between mainly Celtic Britain [including parts of England] and Saxon Britain. As you move North and West Britain tends to be more rugged and the scenery can become wilder and grander. This is a rough division and it is somewhat simplistic, but there is truth in it. All Scotland, Wales and Cornwall, Celtic lands, are North and West of the line.

The population pressures are hitting the South-East, but there are other parts of the country which may be suffering from population decrease,often through ageing, as young people move for jobs.

I continue to be amazed at how wild some of the countryside is in the British Isles. Maybe someday I'll get to see it. 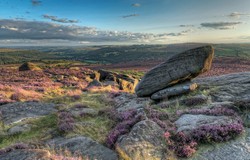