The Birth of Henry V: The Second House of Lancaster Monarch

Henry V was possibly born on September 16, 1386. He was born during a troubled England and in the middle of the Hundred Year's War but how much do you really know about him

On September 16, 1386, the second Lancaster monarch was born. Henry V, often called Henry of Monmouth because he was born at Monmouth Castle, was born to Henry IV of England and Mary de Bohun. He was the first Lancaster king to battle against France in the Hundred Year’s War, with the Battle of Agincourt his biggest triumph.

The infamous son of Edward III of England 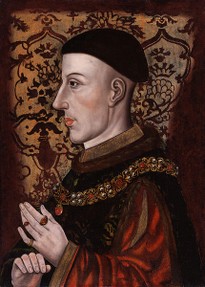 The name John of Gaunt pops up a lot during the Medieval Era and the War of the Roses. John was one of Edward III of England’s sons and the reason why Henry Tudor finally brought an end to the War of the Roses in 1485. Henry of Monmouth was John’s grandson through John’s marriage to his first wife, Blanche of Lancaster.

When Henry was born, his father was not yet king. He was never expected to become King of England, which is why his date of birth is disputed by many historians. Nobody cared to take note of him, including the year that he was born until later in his life. It was Richard II on the throne, who was Edward III’s grandson. At the time, Henry was never to become King of England. His father was forced into exile in 1398 and Richard was raising him; luckily kindly. Henry often accompanied his second cousin on meetings. However, Richard was deposed through a Lancashire uprising and Henry’s father became Henry IV of England. He was now next in line to the throne and Prince of Wales.

Thanks to his father’s power, Henry gained more titles, including the Duke of Lancaster, Cornwall and Aquitaine and the Earl of Chester.

Henry IV made sure his son was ready for the throne. Young Henry was placed in command of some of the military forces of England, leading them into a battle against Wales and taking part in the Battle of Shrewsbury with his father. The battle in 1403 almost led to his death, when he was hit in the face by an arrow. He would have died except he had the best care; again, thanks to his father.

Considering the medical care in the Middles Ages, Henry was definitely lucky to survive; even with the best care. However, he always had a reminder of the battle through scars on his face. This type of wound should have put him off battle but it seemed to strengthen his love for it.

Between 1410 and 1411, Henry found himself temporarily in power. Henry IV became very ill and needed someone he could trust in power. Henry V wasted no time putting policies in that he wanted when he would become king. Many of these policies were reversed when his father made a full recovery and took back control. Out of anger, Prince Henry was even dismissed from the king’s council!

It is clear that Henry IV and Henry V do not share the same view when it comes to domestic and foreign policies. 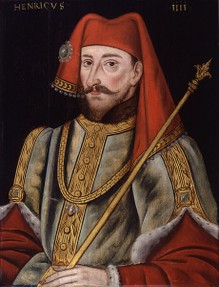 It was clear from very early that the two Henries had very different policies and thoughts. They would quarrel regularly over political matters, especially after young Henry was dismissed from court. It is likely that the Beaufort line wanted to take the throne—something that they had been barred from due to the illegitimacy of the line—and they tried to turn the quarrel between the king and prince into something much more complicated and serious.

The Beaufort sons, Henry and Thomas, taught Henry V controlling the government from January 1410 and possibly helped set their policies in his mind; although he would have been too old for this at the age of 24. Henry V may have developed his policies after seeing the warring between his own family; let alone the rest of England.

Fiction and Non-Fiction About the Battle of Agincourt

The death of Henry IV in 1413 led to Henry of Monmouth finally being crowned King of England. 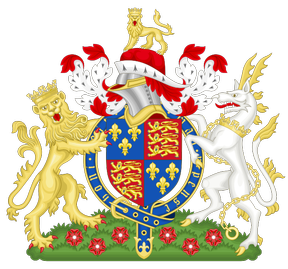 Henry didn’t have to wait too long after his father’s illness to become king. Henry IV died on March 20, 1413, and left his son as heir to the throne. The coronation was relatively quickly on April 9 of that year and chose to keep the same coat of arms as his father.

Henry V wanted the nation to be united. He didn’t want to bring up the trouble throughout the years and had Richard II re-interred. Those who were heirs and suffered during Henry IV’s reign were restored to favour and given their estates and titles back. However, he did worry about a future domestic danger, leading to the execution of his old friend, Sir John Oldcastle. After this, there was little trouble in England, except one plot in July 1415, when Richard, Earl of Cambridge (grandfather of Edward IV) and Henry Scrope, 3rd Baron Scrope of Masham attempted to place Edmund Mortimer, Richard II’s heir presumptive, on the throne.

Since the Norman conquest, there had been no personal correspondence from monarchs in English. Henry changed this; after all, he was the King of England. He also promoted the government to use English.

A Couple of Videos About the Battle of Agincourt

Many have heard of the Battle of Agincourt but do you know the full story?

The Hundred Year’s War lasted between 1337 and 1453—it was really 116 years and a war between the descendents of Philip III of France, which included Edward III of England and Charles IV of France and Philip IV and V of France. There were periods of peace during this war and the second of those was between 1389 and 1415. The start from 1415 is known as the Lancaster phase and was started by Henry V of England. Henry’s excuse was due to support France offer Owain Glyndwr during Henry’s battle in Wales during his father’s reign.

At the same time, Charles VI suffered from mental illnesses and his eldest son was not promising as King of France. The only reason the English supported such a war was because Edward III had first started the war in an attempt to gain the French throne. There were various campaigns during the Lancaster phase, with one of the most well known being the Battle of Agincourt.

On his way to Agincourt, his men were intercepted on route by the French army. Incidentally, this battle was not something Henry’s council supported. They had just captured the Harfleur fortress on September 22. The interception was just a month later and Henry’s men were malnourished, exhausted and, worse of all, outnumbered. Those factors didn’t make Henry turn away though. He led his men into a battle that they won, despite the odds against them.

Henry wanted all the prisoners to be killed. There were many who could have been used for ransom but he decided against that. His concern was that his captors would turn into troops during the next battle. He was smart enough to put nothing to chance. This was his first of many battles that led to the recovery of possessions in France that the English believed to be theirs.

Agincourt was not Henry V’s only battle but definitely his most remembered. His last battles would be at Chartres. Henry V’s death was sudden on August 31, 1422. He was just 35-years-old and left his son, Henry VI as heir, with John, Duke of Bedford as the French regent. After such an amazing battle, Henry V never lived to see himself crowned King of France; something that was possible as Charles VI died just two months later.

This day is not just about Henry V of England

The man that Henry V battled against in Wales, Owain Glyndwr was named Prince of Wales in 1400 by his own followers.

James II of England and VII of Scotland died in 1701. He was not king at the time and had fled to France for protection. It led to his son, James Francis Edward Stuart, becoming the Jacobite claimant to the English, Scottish and Irish thrones.

A bomb in Wall Street exploded in 1920. The explosion killed 30 people.

In 1941, Hitler ordered the death of 100 Yugoslavian civilians to be killed for each German soldier killed.

Arnold Schwarzenegger became a United States citizen in 1983. This led to his ability to be elected governor of California on November 17, 2003.

That's If his birthday really is Sept. 16 but I do like that connection.

It has never occurred to me before that Owain Glyndŵr was crowned on Prince Hal's birthday. I seriously cannot stop giggling here. That's pure gold! 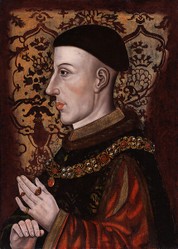