The Departure ~ a Fictional Short Story from the Pen of Ralpapajan

A short story about the unseen and hidden effects of War, The innocent and those left behind also suffer,

The effects of Men of War leaving for active service and the void they leave has always fascinated me. I have witnessed at first hand the devastation of the family unit caused by the loss of a loved one, However there is another traumatic effect on the lives of those left behind that is often hidden from view by those who promote war.

This is a work of fiction

My last article was taken as a "Testimonial" rather than, as I had intended, a Fictional Short Story. So, under advisement, I want to put this disclaimer in.

I am a fiction writer. I write for Wizzley to showcase my writing. Hopefully if one reads my writing they might wish to read more and have a look at my books.

I merely take an incident I have witnessed and then turn it into a short story, a work of fiction.

I write in the first person as it is easier for me when writing short stories as I do not have the words to waste establishing a character for each story. However, every story is about a new, 'hero' or 'villain' as the case may be. If I had done all I have written about I would be a very happy or unhappy person. All other characters are fictional and their names are not the actual names of anyone living or dead. The incidents and stories attached to them never happened. Or, if they did, I am unaware of them. Events and historical facts are either true or as I remember them. Historical figures are, of course, true and are there to set the scene.

To illustrate what I mean.

I worked on Reading Station some years ago. An ancient steam train came in and stopped to pick up passengers. I think it was the Flying Scotsman. As I walked up Platform 4, as it then was, there was a young woman standing near the coal tender. As I approached the driver released a cloud of steam that silhouetted her against the bright midday sunlight reflected from nearby buildings. Who was she? What was she doing there? Apart from the surprise or shock that made her jump, was there any other emotion on display?

I had been at Reading Station in 1968 when the Lost Property depository was there to pick up a suitcase that had gone astray en route from Frankfurt in Germany.

This scenario and the constant funerals and parades that one sees today on television inspired this story. Although I write as though I am the villain, it is not me in fact, merely a device to enable me to get the point across. As a matter of interest 1968 was the ONLY year in the 20th Century during which there is no record of a British Serviceman being killed in action.

I hope you enjoy it.

It was late in September of 1968.  I had just arrived back from a walking tour of Germany, Austria and Italy.  I needed to fetch my suitcase of clothes that had somehow gone astray.

The journey down from London to Reading in Berkshire was uneventful enough. I had never heard of the town before receiving the letter from British Rail to say that my suitcase full of clothes, lost en route from Frankfurt in Germany, had been found.

A Rail Voucher was attached as the loss was solely the responsibility of the Railways. When I took it in to Paddington to get a ticket I pronounced it as though it was an extension of read or to read and the county as Burkshire rather than Barkshire.

The supercilious look bestowed upon me by the Ticket Office sales-person said it all. "Damned foreigners!"

The journey was fast and, as I had caught an express rather than the slow train that stopped everywhere, was over very quickly. I got off at one platform and had to cross over the rails by means of a sort of bridge. As I looked down onto the platform that the Railway chappie in his peaked cap said I should go to in order to find the Lost Property Office, I was struck by the rather large number of soldiers and, presumably, their friends and relatives, who were on the platform. The army, it seemed was on the move.

I managed to work my way through the throng of people, some looking heart-broken, some severe, some impatient, as though their time was too valuable and they wanted to leave there. My own country was in the throes of the beginnings of a war and seven years before I, too, had left by train to complete a training exercise. It seemed to me, from my own experience, that these men were off to the front judging by the expressions on their faces and on those to be left behind.

Officially, of course, British troops weren't involved in the Viet Nam War but I had been involved in the Australian demonstrations against the war in Grosvenor Square when police horses had been used against peaceful demonstrators and 200 of us, though I was not one, had been arrested. I knew that the British Government was sending troops to the States, to Fort Dix, where they resigned from the British Army and signed up for the American one. Then when they had finished their time reversed the procedure. To my eyes the demeanour of those troops spelt out Viet Nam!

Still it was no concern of mine. What they did was their own concern.

It took a while to get the case and when I left the platform was empty though another train was standing there. A young girl, with tears streaming down her face, was walking along the platform towards me as the train started off. As the engine drew almost alongside her the driver blew his hooter or whatever the siren was called and she was engulfed in a cloud of steam.

She screamed and jumped violently to one side and cannoned into me. We nearly fell but by grabbing each other were able to stay on our feet. Clinging to each other as we were I could feel the vibrant youthfulness of her frame and the curvaceous mould of her body next to mine. Our eyes met, hers a bright blue framed by long black lashes and mine green with, I was vain enough to believe, even longer lashes. An electric current jolted both of us and I held her longer than was really necessary. She felt small and vulnerable and incredibly vital in my arms. Her hands were on me and were gripping my biceps.

I looked down and saw the solitaire diamond ring next to the plain gold band. I should have let go then and returned to my lodgings at the Club in Earls Court.

I didn't. I just held her and then said to her, "You look shaken. Care for a drink?"

She nodded and took my hand to lead me from the station. "This way," she said, "I know a quiet pub where they serve a good ploughman's."

After that events moved swiftly as they always seem to do in such cases. She told me that her new husband had left on the Troop Train. That he was a Sergeant in the Army and could not tell her where he was going. She had been married for only two months on the previous Saturday. She was going to miss him.

We drank too much cider that afternoon, a week day, and when I saw her home she invited me in; for coffee. I stayed a week. Each day I wanted to leave and she wanted me to go. Every night she cried herself to sleep at what we had done and the betrayal of her soldier husband but the next morning came a repeat of the love making.

Then just seven days later there came a knock at the door and there was a telegram delivery from the Ministry of Defence. I didn't have to read it, I knew as I watched her face that her Sergeant would never be coming home and that she would always have to live with her final betrayal.

Without saying a word she picked up the phone and dialled. "Mum," she said, "I need you. Frank's dead. He was killed in an accident in Liverpool."

Then she turned, her eyes opaque, then looked at me and at the door.

I nodded, gathered my suitcase, and left.

If you liked this example of my writing why not look at my books?

I really appreciate any constructive and positive criticism of my writing.

Thank you Sheri, It is. I worked on the Station for a few years when I first moved to England.

Very evocative. I lived in Reading for a year and could picture the train station (if that is the Reading Station you refer to). Also liked your introduction before the story itself. 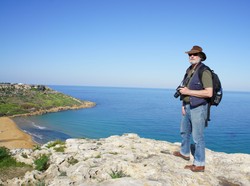