The Dilemma of Bedbugs

Bedbugs are a worldwide health concern, and these insects (arthropods) have found their way to every continent of the world.

Bedbugs have interfered with human sleep for thousands of years. In fact, they were present 3,500 years ago among the ancient Egyptians. Though they have mostly occurred in poor regions of the globe, it is evident now that they have reached every continent. Moreover, they affect people of every socioeconomic status.

There was a decline in their presence during the middle of the 20th century; however, bedbugs have since made a resurgence. This may have to do with insecticide resistance as well as the removal of the insecticide dichloro-diphenyl-trichloroethane (DDT) in some countries. Travel technology has also advanced across the globe, and this has led to the spread of these arthropods to many regions [1, 2, 3].

Travelers have even carried bedbugs to five-star hotels and resorts, and subsequent customers are at risk for acquisition of the infestation [2].

Bedbugs are especially present in large cities such as New York and Philadelphia.  Nevertheless, they are in every state of the United States.  They are particularly numerous in refugee camps and low-income communities.  Infestations affect apartments, college dormitories, shelters, cruise ships, trains, and buses [1, 2].

These organisms are obligate parasitic arthropods, and this means that they must feed on humans or animals in order to survive.  The scientific name for the common bedbug is Cimex lectularius, and it resides in temperate climates.  Cimex hemipterus, on the other hand, lives in tropical areas.  In any event, there is interbreeding between the two species [1, 2].

Though bedbugs are quite a nuisance everywhere, there is no evidence that they transmit disease to humans when they suck blood [1, 2, 3].

In homes, these insects tend to remain within eight feet of where people sleep at night.  They generally feed between 1:00 am and 5:00 am.  The warmth of human bodies as well as the emission of carbon dioxide from people draw bedbugs to the person.  They especially like dark environments of the home because light seriously disturbs them [1, 2].

In the home, the insects commonly reside in mattress seams, box springs, bed linens, clothes, electrical outlets, and suitcases.  Couches, chairs, picture frames, carpets, and wallpaper are other places where they stay.  They may lead to property damage and other expenses

The occurrence of bedbug infestations is a global problem that has worsened in recent decades.

When people travel, bedbugs come with the luggage or any other way they can such as via clothing.

How do they travel? 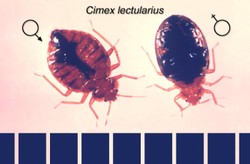 The G-Wiz of the United Kingdom and the REVA of India are one and the same electric car, big on environmental and public health though small in size.
98%  9   13 DerdriuMarriner
Environmental Health

Nissan LEAF® has five-year leads as the top-selling electric car, partly due to maximum sound confidentiality inside and minimum noise pollution outside.
Loading ...
Error!