The Drovers' Route: Keswick to Ambleside

Drovers' routes criss-cross Britain. dating from the days before steam engines made easy passage possible. They are the roads once taken by tough and often armed men who were driving their herds of cattle, sheep and sometimes geese to the markets of England's big cities. Often they lead from Scotland,Wales and Northern England to the richer lands and marts of the South. You can still follow them, and I will take you along one. but beware, this is not a circular route and you need to either get transport back to base or a place to stay at the end.

The photo of Langdale above is courtesy of peterstuart

The Beginning of the Walk

Keswick is a market town, though now its main trade is tourism, but in the days ere steam engines made transport rapid and safer the town was once a place where herdsmen mustered their cattle for a trip southwards. I say safer advisedly, because even up to the 1820s the drovers were selected from tough men ready to fight off rustlers bent on stealing the cattle or the money earned from their sale.

The route is now tourist trail, part of the scenic Cumbria Way that takes walkers over the Stake Pass down to the broad and beautiful Langdale via smaller tributary valleys  at each end. The route begins in Borrowdale, where Keswick bestrides the isthmus between Derwentwater and Bassenthwaite, and follows the narrow road down the valley, passing alongside Derwentwater, with its four large islands, one inhabited centuries ago by the hermit St Herbert. The lake finishes at Grange. The word grange denotes a site once owned and farmed by Cistercian monks until England's monstrous vandal, Henry the Eighth, destroyed the monasteries. Of the monks no trace remains,but there is a cafe sited on a roche moutonee,a glacially shaped rock, that sells delicious food to refresh tired travellers.

As you walk southwards the valley narrows between steep slopes heavily aforested before it widens again.  Slightly beyond the narrows the route diverges, the right continuing across the dramatic Honister Pass and the left down a B Road [ a minor road] towards the tributary valley of Langstrath [half English, half Cumbric for long valley.] You pass  through the village of Rosthwaite and you follow the path up Langstrath Beck,beck being a Northern English dialect word for brook or stream. By now you will have passed out of the wooded slopes or cliffs of Borrowdale and have entered more rugged terrain, which is beginning to ascend as you approach Stake Pass. Let your mind adventure back in time to the days when the path was heavily trodden by large herds of lowing cattle, with the shouts of drovers and sometimes the din of conflict as drovers fought off cattle thieves, often raiders from the North Pennines Hills, whose men were not always well-behaved. Some of my distant ancestors were Armstrongs, a border clan known for their reiving [cattlle thieving] so they were likely to have been among the villains in some of these cases.

The reivers took advantage of the troubled border between England and Scotland, and so when  the crowns of the two countries were first held by the same king, James, [1601]  the situation eased significantly. He killed the Armstrong leader and his sons and exiled the English Grahams to Ulster, but there was some cattle theft until the 1820s.

The first time that I traversed Stake Pass was on a misty winter's day many years ago, but I say this about many of my walks, as the first time was so long ago. It is a rugged upland scene, though the route is easy to walk, as long as you realize that it does involve an ascent. Including ups and downs the whole of this 25 mile walk includes 3000 or more feet of climbing, but it is not very steep, and the ascent on the Langstrath side is not too hard, certainly easy enough for cattle. The herdsmen would not have wanted to spend a night on the pass, which is typically rocky terrain, so it is short enough to cross in a single day, but many would have had to have crossed in mist and rain.

The route is way-marked by cairns on the latter half of the pass and it is now the Cumbria Way. Where Langstrath Beck forks follow the left path, which leads over to Langdale. You are now in real mountain country, a moorland with areas of wet ground, boggy in places but not dangerous. When younger I did it alone, and could feel the strange sense of isolation that comes when you traverse mountains in mist on winter days that are not long enough. Stick to the path and you will be fine to enjoy the silence of the hills. Ahead to your left you see the Langdale Pikes, which are like many British mountains, not large, but  tough, like the British really! They make for some long and hard walking in places, and they can be quite steep.Once in a strong wind my then young son Andrew was knocked down by a gust and we had to abandon the walk.

Eventually the path forks, again go left towards Langdale [old English for Long Valley] . Here is  where you pass between Mart Crag on your left and the tumbled rocks of Black Crag to your right. Langdale has two short "horns" at its end,small valleys known as Mickleden [Old English, big sheltered valley] and the smaller Oxendale. Here was where local people and drovers parked their cattle, the drovers for the night and locals for when the Scots or the men from the North Pennines, known until the sixteenth century as Highlanders, were raiding. There was only one easy way in, so it was simpler to defend than Mickleden was.

Mickleden is an easy walk downhill on the side of the Langdale Pikes, and the valley below is well used by sheep farmers. I think that the drovers took the path down the valley, which is better for herds than the mountainside footpath. Soon you are in Langdale itself, and the bulk of the climbing, though but half the walking,is done.

In the picture below you see where Mickleden meets Langdale, and above it one of the Langdale Pikes, known as Pike o' Stickle.

With the first sections of your 25 mile route behind you you will soon by seeking refeshment, and near to the end of Mickleden is the Old Dungeon Ghyll Hotel. There has been a drovers inn on this site for centuries,but it has been rebuilt over the years, but it is old and replete in character, with a large range wood burning fireplace and hand pumped ales. It is a place where climbers who have tried the steep crags above, such as Middlefell Buttress come to rest and refuel. But centuries ago the place rang with the shouts of men and the bellowing of bullocks meant for the meat markets.

The route to Ambleside runs down the valley. You pass another hostelry, the New Dungeon Ghyll, next to which is the Stickle Barn, named after the mountain lake Stickle Tarn two thousand or so feet above it. This converted stone barn is one of my favourite  places to refresh myself, and after our much loved walks to Stickle Tarn Maureen and I stop at the barn for drinks, which for us is an essential ritual.

The valley is a place of beautifully kept green fields, whose loose cropped turf reveals their use as sheep pasture. It makes a pleasant downhill walk, sometimes along the river that flows down to the lake below. At times through fields and at other times through patches of woodland,it is a joyful journey through a now peaceful land.

Further down the valley you pass Elterwater, whose name comes from elter, old Norse for swan.so swan lake, though I have never seen swans there. There are more hostelries and cafes in Elterwater and the villages of Langdale and Chapel Stile , through which you pass later on.

You see how the place names that I have mentioned reveal the complex ethnic history of the area. Norse, English and Cumbric, a dialect of Welsh all have left their  traces in the place names. Farmers in Cumbria used to count their sheep in Cumbric until a century or less ago, yan,tan tethera [one, two, three... and so on]

By now you are well on your route to Ambleside, which is situated on Lake Windermere and is well blessed with hotels. We are staying there this summer while Maureen does the route as a sponsored walk for a  cancer charity. I have done it already and have to work that weekend, it is examination marking time and I am under strict pressure to meet deadlines, so while she walks, I work, with my computer in the hotel room. I will find some time to enjoy the town and the lake

Beautiful countryside. Looks like you have wonderful views with few trees in the way. You walk 25 miles?

Thanks! I usually leave writing about the Lake District to you, but I know that you have not done this walk, so I wrote about it. I only write about walks that I have experienced myself.

Delightful. Well done Frank. My favourite part of the world 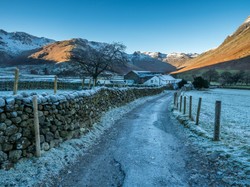 Mountains of the Mind: Adventures in Reaching the Summit (Land...
100%  22   14 KathleenDuffy
United Kingdom of Great Britain and Northern Ireland