The Gathering Tide: a review

The Gathering Tide is a first book by a promising author that will repay readers with an interesting read.

The North of England is not regarded as a fashionable place to be, compared with the South of the country, but there is much to be said for the area, and this book, which recounts various walks around the region of Morecambe Bay, does much to celebrate an area which is often overlooked. Karen Lloyd uses the framework of a number of short walks around the bay to reveal the history, archaeology and wildlife of the place, and she opens an often overlooked area to the public eye.

Morecambe is an old word in the extinct Cumbric tongue [a relation of Welsh once spoken across Northern England] meaning Big Bay. The bay is in the North West of England, just south of  the Lake District.  Like many places it combines beauty and danger, for while the views across the bay to the Lake District are lovely and the shore walking is pleasant, the sands are treacherous and have taken many lives over the years, including the infamous case of the Chinese cockle pickers, illegal economic  immigrants twenty four of whom drowned as the rushing tide advanced on them a few years ago.

The bay and the town of Morecambe are a tourist spot, and I can recall a holiday there back in 1956, when my cash-short parents got a free Autumn break on condition that they cleaned my uncle's caravans, of which he had two in the area. It was that short break that gave me my memories of the area, so  the advantage  of this book is that it has expanded my awareness of the place, taking me beyond the tourist spots of my childhood to reveal the surrounding environment.

The Gathering Tide is well-written in a fluent style. The English is good, but never heavy to read, so  the book can be read as a leisure work, but one which informs and expands the mind. The personality of an author comes out in their work, and Karen Lloyd is revealed as a pleasant and thoughtful person.

I particularly enjoyed the chapter, Testing the Sands, whose subject is a walk with the Queen's Guide. There are several of these guides, each of whom specializes in a particular route across the sands, and who must guide people across the potentially deadly crossing. The post dates back to the sixteenth century, and comes with a free cottage and four fields. While I knew of the dangers of the sands, this chapter taught me much that I did not know.

We meet Cedric,the Queen's Guide, in his eighties but still hale and hearty, with the physique of a man half his age, a testimony to healthy outdoor living. The role was established when the alternative path along the shore was fraught with highwaymen and often boggy, and in that era the Queen's guide probably carried a gun and a sword. He, some assistants and the author set out on one of his regular trips re-establishing the pathway through the ever-changing sands, that can alter in a single night and which certainly alter greatly after a storm. They use brobs, markers made of branches of laurel, whose leaves do not rot when water-covered, to mark out the pathway.This is an ancient technique also used on Britain's most dangerous path, the Broomway in Essex.

But we are introduced to the lethal dangers of the sands. The ever-shifting quicksands we all know about, but did we know of belgraves? I did not. These are water filled holes that are big enough to swallow a tractor and sometimes have done so. You cannot know their depth until you drive into one. Cedric tells of how one of his colleagues once  drove into a belgrave.Summoning his strength, the powerful swimmer struck for the surface and was pulled out  by his relieved work mates. The tractor was never seen again, engulfed by the shifting sands. Those not familiar with the sands also may not know that they can be deeply rutted and that it is difficult to get tractors across.

The waters are dangerous, Cedric tells us.The shifting sands alter the course of the rivers that flow into the bay, and after one storm the course of one changed by several miles. The direction of the wind can alter surface conditions, even changing the width of the rivers,  from narrow and fast to broad and slow. The tide comes a-racing across the surface, there is a tidal bore,a surging wave in some conditions that can race faster than a man can run, a snare for the unwary.

Cedric is a survivor. Once when he took his twelve year old daughter shrimping in the bay, a sudden mist fell on them, so thick that they could see no lights on the shore. For most of us that would be the end, trapped in a wilderness. But Cedric guided them out to safety. merely by using the sound of the river, assessing where they were by its change of direction. Expert local knowledge.

The Breadth of the Book

Karen Lloyd takes your mind for a walk, and she leads you through history, archaeology and nature. She has a good knowledge of birds and can identify different species, so in the book you are treated to descriptions of the behaviour of oyster catchers, egrets and peregrines, among other species. She sights a peregrine on the sands, perched on a brob. I did not know that the peregrine dwelt by the shore, as I thought that it was a mountain bird only. It must find some source of food in that wilderness.

She begins with history, reminding us of the ignominious part that nearby Lancaster played in the slave trade [Britain's fourth largest slave port] and she takes us to Sambo's grave, the tomb of a black slave boy,  abandoned on the shore by a cruel master who had no more use for him. Sambo  died a few days later, lingering sick and lonely, without his name being known, for he spoke no English,  so the name Sambo was given him in death by the kindly peasants and artisans who thought that he deserved a decent burial and clubbed together some of their small cash resources to inter him.  The grave is something of a pilgrimage site for anti-racists, and as a member of the Anti-slavery society it is a place that I would  like one day to visit. Some suggest that the name Sambo is racist, but it was not then and was given by kindly folk who thought that no one should be namelessly interred.

Archaeology has a place in the book, and her walks take us up to the hard-to-access caves in the region, where the oldest human remains in Northern England were found. We imagine the post-Ice Age landscape, dotted with elk and deer,and with the hunters who preyed on them.

But what we get in the book is a challenge to the oversimplification of maps. The map shows land in green and brown, the sea in blue, but what we must realize is that land and sea are not distinct at times. The bay is clearly both at times, but her accounts show the essentially boggy nature of  the land at the head of the  bay. When we read that Ulpha Farm near the bay has to continually pump to save its lush grass  lands from turning into marsh, we realize that the struggle between water and land is endless. But much of North West England has the potential to be the same, and this does not bode well for the future. We must fight for our food resources, but we know that there will never be a final victory.

This is a very enjoyable book, which gave me good reading. I commend it to you.

I don't think that Ulpha Farm has a specially environmentally friendly way of pumping. It is not the same water that recycles, but rainwater from the hills that flows down.

Thank you! It sounds like an interesting, natural landscaping feature (perhaps not just for the sandier of properties), something I as an arborist appreciate.

Think of a broom with a head made of laurel leaves. Stick the handle in the sand. That is a brob.

frankbeswick, Thank you for the practicalities, picture and product lines. (The t-shirt is hilarious.)
Do you have a way of explaining brobs? I do not understand what is on the internet and find no good pictures.
Does Ulpha Farm have an environmentally friendly way of pumping and is it the same water that, myth of Sisyphus-like, keeps coming back and getting pumped out?

That is useful information. As the bore is the incoming tide, I think that all the bores are basically the same one, but it might break into more than one wave. The interaction of tide, sands and rivers makes for some difficult hydrological conditions. Certainly you need a computer to calculate your tidal predictions for the bay, and so you cannot rely on common sense. The fact that there are ridges and deep pits in the sands suggests to me that in certain conditions the behaviour of the waters is approaching chaotic, a situation that can happen in complex and high speed water conditions.

There are a few Bores along there. Arnside/ Silverdale has a Bore and an alarm to warn people sounds several times before it approaches sideways on and very, very fast from Morecambe Bay.

The area proximate to the sea front is fine, the sand is firm and there is no danger. But you should never go far out and you should heed the warnings, for the dangers are the sands and the speed at which the tide comes racing in. We talk of the Morecambe Bay Bore, a long wave that advances at high speed as the tide flows in.It approaches faster than a man can run.

Those Morecambe bay guides are astonishing people. They know where to place ever step. I wouldn't go any where near Morecambe bay even in the safe parts. It is very beautiful and very dangerous.

Thanks, Lindy Lou. The last time that I visited Morecambe I took the children for a stroll on the sands near the shore, which are quite safe, but we never got more than a hundred and fifty yards from the land. Where we were was quite safe with firm, flat sand. It was just a beach.But as you move towards the sandbanks further out you enter trickier terrain.

The cockling industry there is finished. While the locals, who knew the bay well, ran the fishing sustainably, industrial scale gangs of cockle pickers, often illegal immigrants, stripped the cockle beds. There were confrontations, and just before the twenty four illegal Chinese immigrants drowned there was one confrontation where it is claimed that one of the illegals produced a gun to menace local cocklers.

Out on the sandbanks you might be only a few miles from land, but you are in a real wilderness, a dangerous one.

Interesting. I see you read about your walking and discovery passion. It soulds like a worthwhile book. 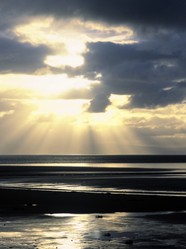