Wedding dresses have changed a lot over the years. The colour is the most notable of all changes.

Wedding dresses haven’t always been white. It wasn’t until Queen Victoria married Prince Albert on February 10, 1840, that white wedding dresses became fashion. Since then, dresses became a sign of purity and love the bride had for her husband. It did help that society changed and there were more marriages for love rather than power. Marriages were no longer business deals, as much, between families.

Before Queen Victoria set the trend for white wedding dresses, they were something fancy that the brides got to wear. They meant nothing in particular, especially for lower class families. They were simply a way for the bride’s family to set a standard for their wealth and show off their own position of power and authority.

Brides Didn’t Buy Their Dresses for Their Day

Most brides couldn't afford a new dress, so they wore one they already had. 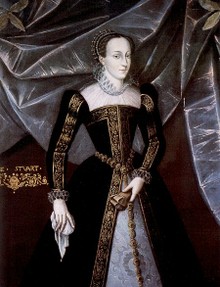 Especially for the lower classes, it was impossible for brides—or their families—to pay for a special dress for the day. In the majority of cases, the women would wear something that they already owned or a dress of their mothers/grandmothers. It was usually the finest dress available to them and more often than not in a colour other than white.

One of the most common colours worn at weddings was actually black! Dark colours were extremely common, as they would show up less dirt when walking around. Dark colours would also hide stains better, meaning that the clothes could be worn more than once. It was a completely different time when laundry wasn’t completed as quickly as it is now and finances were much tighter.

The Choice of Colours for Wedding Dresses

The colour of wedding dresses has changed over the years and dark ones were often preferred.

When brides wanted a different colour, there were some that were more popular than others. Blue wedding dresses were extremely popular. The colour was a sign of purity and piety because it was the colour that the Virgin Mary was always depicted wearing. This would usually be a darker blue, despite the Virgin Mary wearing lighter shades.

Green was a colour usually avoided. This colour was associated with bad luck and which bride would want that on their wedding day. Throughout history, women have been continually blamed for poor marriages, lack of children (especially boys) and various issues in the marriage. If a bride wore a colour that was bad luck, she was setting up her marriage to fail. Remember that people were traditionally very superstitious.

The Change to White Wedding Dresses

Queen Victoria set the trend for the white wedding. 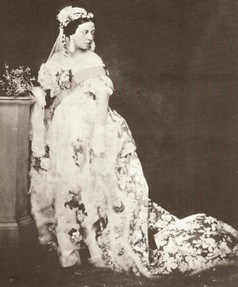 1401 is the first sign of brides choosing to wear white. However, the trend didn’t set until Queen Victoria. The gown was beautiful and a true image of the time. It helped that in 1850, one of the first American women’s magazine called Godey’s Lady’s Book stated that white was the best hue for brides.

White became the must have colour. Those who didn’t wear white were seen as a lower class. However, the colour wasn’t the only necessity: the quality of the material was considered. For the first time, brides started to buy their wedding dresses specifically for the day; even though they would only wear them once.

It took some time for women in the lower classes to afford white. It was a hard colour to find, which meant many dresses had to be specifically made for the woman. Only those with money were able to afford the dresses; after all, weddings were traditionally paid for by the bride’s parents at this time.

The dresses weren’t pure white at the time either. If you look back at pictures of “white” wedding dresses, you will see that they are usually off-colour. Some even look yellow or gray. This was due to the lack of bleaching agents and the ability to use them at the time. As the technology and means developed, the dresses became brighter and more glamorous.

Back to the Old Wedding Ways

Tough economic times have seen a relapse into the old ways.

During the World Wars and Great Depression money was extremely tight. Brides couldn’t afford, or justify, buying a dress that they would never wear again. The tradition went backwards to wearing their finest gowns that they already owned. These were back to the darker colours that historic traditions followed.

It was after the Second World War when the brides went back to beautiful white gowns. One of the first and most notorious after the War was Grace Kelly, whose dress inspired Kate Middleton for her marriage to Prince William. The dresses also became more extravagant and moved with the fashion of the era, as noticed by Princess Diana during the 1970s.

The Traditions for Other Nations 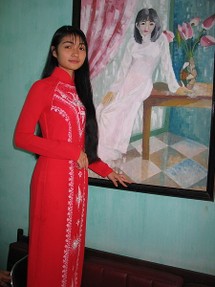 White wedding dresses are only followed by Western cultures. When you look at other cultures, especially the Japanese, Chinese and Indian ones, you will find that multicoloured or red dresses are more popular.

These colours are now being used more and more in Western weddings. People want something different or want to match their personality, whether it has a gothic style or is in a completely different colour. This has been noticed more since 2008 and the economic downturn. People are beginning to struggle to pay for designer wedding dresses in a traditional colour and need to buy something they can wear again.

Wedding dresses have changed over the years. Whether it is the style or colour, there have been changes over the years. It was quite easy at first, where the bride would wear her finest gown. However, they are now dresses that you wear once and white is tradition.

And the history of the groom’s wear? Easy: just match the bride, without knowing what the bride will be wearing!

I suspect that brown or off-white cloth was common for ordinary women in the Middle East at the time.

Indeed there is no evidence that 1stC middle eastern women wore blue. It is a source of amazement to me that Mary is depicted as white, blonde and wearing blue when in fact she was probably dark haired, dark skinned and dressed in white. She was middle eastern!

The association of Mary with blue is an artistic convention, for there is no mention in any sources biblical or extra -biblical, of which there are a few pertaining to Mary, of what she wore. But why artists depicted her wearing blue I know not, but possibly as she bore the title Queen of Heaven blue, the colour of the sky, might have been apt.

Everything I've read in the past (this was written in 2013 and I haven't updated it since!) spoke about the use of navy blue for formal dresses and wedding dresses if black wasn't used. As for the mother of Christ, she didn't live in a world of luxury, so it doesn't make sense to me personally that dark blue and luxury would go together if she wore that. Thanks for your comment. I'd love to read something of yours about the colour blue and the history of it.

You may want to look up the history of the color blue. It's a fairly recent color, and the pigment was expensive for a long time - which meant that a blue dress (or a blue madonna) - would be a sign of luxury. Especially a dark blue. Also - I'm pretty sure that this is why Madonna (the mother of Christ) wore DARK blue. Out of the top of my head blue pigments were available (but expensive) for painters in the 17th century and later.

The first time I had ever heard of a bride wearing black was in one of the Laura Ingalls Wilder books. Laura wore black because it was her newest and most elegant dress.

We use both bright and light colored wedding dress for marriages, actually many Indian brides prefer to use red.

Thanks, VioletRose. Good for you opting for a different colour. Was there a reason behind the red, or did you just want something different?

I didn't know green was bad luck. I see a lot of green gowns in paintings, and love them.
I enjoyed the article!

The new discoveries in the Rising Star cave in South Africa arouse questions about human evolution.
100%  12   7 AlexandriaIngham
Other History