The Idwal Skyline: a mountain walk

The passage around Cwm Idwal which takes in the four peaks that surround the mountain lake,Idwal, is quite a walk.

The Idwal Skyline is hard walking, but when you have done it you know that you have been in genuine mountain country. It comprises four peaks, Tryfan, known as a tough peak, Glydr Fach and Glydr Fawr [Little and Big Glydr respectively] and Y Garn, all of them demanding summits. Glydr means clutter, and the reason for this is the shattered rock at the summit which makes walking difficult. While none can match the difficulties of the Scottish Highlands, the Idwal Skyline makes a strong claim to be up there with the hard routes.

Image above courtesy of Jamie Bassnet

"You shouldn't have gone round widdershins." my philosophy lecturer interjected as I was sitting in the lecture room awaiting the commencement of the lecture and speaking to my  friend Cahal about the weekend's walk that had not gone as planned. Of course, walking in North Wales in October when the clouds are all too often borne in by strong winds  is asking for some risk, and I was doing the walk alone. But widdershins, anticlockwise, the concept had never crossed my rational mind, and here was a philosophy lecturer using the term! He did not elaborate on his thoughts and I did not  ask for clarification, but I knew him to be no ivory tower academic, but a man rich in life and mountain walking experience.There is more in heaven and earth than is dreamed of in Philosophy.

I had begun the walk by starting at the opposite end of the horseshoe of peaks that comprise the Idwal skyline, Y Garn. This part of the route  begins at Llyn Idwal, a bleak mountain lake set in an armchair of harsh peaks. At first the going was straightforward, the path led upwards with no difficulty, but I paid too little heed to the fast moving clouds that scoured the summit. But at three thousand feet the wind hit me hard. The summit was covered in a mist of fast moving cloud; and it was very cold. I know enough to recognize wind chill when I encounter it. The cold wind was eating into my body,well equipped as I was,  and I knew that the safest option was to  abort the walk. I came down by the most direct route available, not the one by which I had ascended, as the mist was disorientating me, but the quickest and easiest route. Lesson learned with no harm done.

The conventional commencement of the route is via Tryfan, the mountain that you see below in the picture, it is a stark mass of rock with three routes upwards. Two, the Heather Terrace, the easiest route and safest route, which you can see as a white scar on the mountainside, and the route from Cwm Idwal [Idwal valley] which is hidden on the far side of the picture, ascend to Bwlch Tryfan, the col between Tryfan and Glydr Fach, from which there is access to the two peaks. But the route up  Tryfan is a scramble up rugged rock to the summit. The North Ridge, which you can see fully in the picture, involves more than walking, for at times you have to scramble and it is known as a demanding route. I have been ascending the ridge when jet fighters passed below me, for the Ogwen Valley at the bottom, from which the picture below was taken,is a training ground for jet pilots based in nearby Anglesey.

At the summit of Tryfan there are two pillars, Adam and Eve, and the most daring of people like to jump from one to the other, daring the drop. I have never  done the jump.

Having ascended Tryfan you double back down the ridge to Bwlch Tryfan to take the route to Glydr Fach by what is known as the Bristly Ridge, on account of the roughness of the rock. If you go directly up the ridge you run into some difficult rock, so it is wise to ascend the scree slopes by the side of the ridge. There is also a route up what are known as the Bristly Gullies,which is an easy rock climbing route. Be aware though that the gullies vary in severity and if you are uncertain, inexperienced or ill-equipped, take the safe option and walk up. Also be aware that in Winter the mountains become far more difficult than they are in summer. Always play safe. Anything can go wrong.I can recall that at the top of Tryfan a boy scout in our party on a lovely summer day developed appendix problems and had to be escorted down and taken to hospital. The appendix turned out to have perforated. Luckily he was treated and made a full recovery. This is the only time in my mountain walking life that anything like this happened. but once is too much.

Here is a link to a site that shows gullies. It also shows someone jumping Adam and Eve.This website gives valuable guidance.

The view from the Glydrs is spectacular. You look down on Llyn Bochlwd, a mountain lake, and can see over Llyn [lake] Idwal and down the Green Nant Francon Valley towards Anglesey. The top is a tough walk of broken rocks and boulders. One sight is the cantilever stone pictured in the thumbnail.The stone is a natural cantilever and can take the weight of several people without toppling. The man in the picture is not I.  Another feature is Castel Y Gwynt, the Castle of the Winds, which is not a peak in its own right, but a small "top" between the two Glydrs. Some walkers make a point of climbing it  so as to say that they have done every top. The area between the two Glydrs contains Llyn [lake] Cwn, the Lake of the Dogs, which was so named because it was where the Welsh chiefs used to meet with their dogs to hunt wild boar and deer across the summit. The hunting is now gone, but the name remains. Some locals still gather bilberries there and further down the mountain sides.

One feature identifiable by the geologically alert is the small number of hanging valleys on the edge of the Glydrs overlooking Idwal. These are pre-Ice Age stream beds that used to flow downwards until  the glaciers carved out the valley and deepened it until what used to flow seamlessly down terminated in a large cliff.  Once on  a snowy day I inadvertently walked across one and put my foot through the ice into the frozen stream. Wringing out one's sock at three thousand feet up on a snowy mountain is not anyone's idea of fun.

You can make the circuit by carrying on over the summit of Y Garn, but there is a way off from Glydr Vawr, which consists of descending on the scree slopes towards the cliff  above Idwal. Be very careful here and do not run, as you don't want to lose control near to a cliff. Be especially careful in Winter!

You come to the edge of the cliff where a stream from one of the hanging valleys pours over the dark cleft of Twll Dhu,the Devil's Kitchen. To the right of the Devil's kitchen a path goes along the edge of the cliff and descends to the point where it meets a rising path ascending from Idwal. Take this route downwards, as it is safe. Do not under any circumstances try to descend the Devil's Kitchen. It is not a route for scrambling, but for climbers properly equipped.

The cliff face is home to a range of alpine plants, some rare in Britain, remnants of the post-Ice Age alpine flora, which have only survived because the cliff is a north facing wall so its micro-climate is quite cold, and therefore suits alpine flora.  The cliff also hosts subarctic flora similarly residual from the Ice Age. The rare Snowdon lily is found along with tufted, purple and  Arctic  saxifrage. The Welsh poppy Meconopsis cambrica] is truly wild here. Moreover, north-facing cliff replicates woodland light conditions at places  so you may see woodland plants, such as the wood rush [Lazula sylvatica.] None of these plants jumps out and advertises its presence, and sometimes you must explore the cliff in safe places to see some of these floral delicacies. One denizen of the area that I have never seen is the feral goats. I have seen them on the Great Orme near the coast, but never here. You will not see sheep as the area is closed to sheep to allow the rare plants to flourish, but the goats are wild and therefore are deemed part of the fauna of the place.

Altogether, this is an area for great walks, but always remember take care and go safely.

The jump is short, but exposed. You jump from the taller to the shorter and then drop down a few feet back to the summit.

FrankBeswick, What is involved in jumping from the Adam to the Eve pillars? Does the jump place the jumper on the way down or does he/she have to jump back to the summit?

I forget to say that the view from the summits is of Snowdon, Wales Highest peak.

This appears to be one of the more arduous of your walks, albeit rewarding. 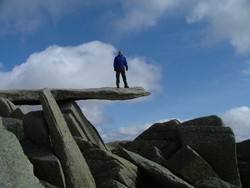 Reflections on the Monarch's Death13 days ago

Walking the Great Glen19 days ago

The Rings of Power: initial thoughts24 days ago