The Incredible Hulk - Can Bruce Banner Resist or Control Anger?

The Incredible Hulk is an interesting study in conflict and anger and even repression. Here we will explore this fascinating film and how it deals with these issues.

I guess I'd have to say one of my favorite kinds of movies are the ones about the underdog who triumphs, even in his much less than perfect way. After all, nothing can be done without error, no triumph is made without faltering. And maybe that's what is appealing about such movies: They give us a sense of true hope. Not fantastical hope, but the hope that we ought to try in spite of seemingly insurmountable obstacles.

The Incredible Hulk is one of those movies which reveals the struggle of the underdog against great odds.

Bruce Banner has something haunting him, something he would wish to control if not entirely shake off. It's destructive as well as indestructible, a monster of sorts.

He had said, "You wouldn't like me when I'm angry" and no statement could be more true.

Bruce Banner turns green and many times his own size, becomes a hulking Behemoth of unimaginable strength, when he is provoked to extremes; and destruction always follows.

Hidden away in Brazil, away from the American military which would like to control and exploit him and his powers, Bruce searches for the antidote for his curse: Both scientifically and in self-control: Close, but to no avail.

Soon, the American authorities catch up with him. He flees, soon finds himself back in America; and back in the arms of Betty Ross, his long lost love he wasn't certain he'd ever see again. Her father, General Thaddeus Ross, is the one who would like to capture Bruce and exploit his powers.

Meantime Bruce and Betty locate a scientist, Dr. Samuel Sterns, whom Bruce had been secretly communicating with on the Net, who is willing to help him with the antidote.

All the while, a gung-ho veteran soldier under the command of General Ross, has his eyes on obtaining the great powers of Bruce's alter ego Hulk. With the help of the general and the scientist, this over-zealous soldier is transformed into a huge, spiked monster that seems to outmatch the Hulk.

Without spoiling too much of the plot, I think I'll stop there and proceed to the deeper undercurrents of the story.

Bruce is plagued by this demon inside. Going to great lengths to quell the beast, he comes close but fails. Certainly this demon is a common one, and the very act of suppression seems a sure-fire failure.

Bruce is heart-breakingly still in love with Betty, but fears to make contact with her because of his troubles and the demon lurking inside of him. But love finds a way, as always, and it turns out the Beast still loves the Beauty.

Without going into too much detail, because you might want to find out for yourself by watching the movie, Bruce comes to this revelation that all involved in the story have brought about the ultimate terrifying climax, and Bruce is willing to expose himself to it to end it. Bravo, Bruce! 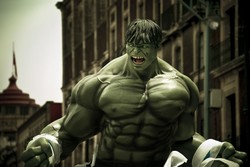