If only we had dated originals! When we talk of early Christian papyri we mainly have fragments that are copies of copies, often tiny bits that give a tantalizing insight into another world that is deeply relevant to us. The papyrus with which I am dealing is a tiny fragment. It deals with Jesus' attitude to women, and he mentions his mother, his wife and a disciple called Mary. Note that the wife is not named, but there was more than one disciple called Mary

If you want to make a stir, just link religion, sex and Jesus. Unfortunately, the genuinely religious issues can easily get lost in the noisiness that follows. The problem consists of a papyrus in the Coptic language that has Jesus' mentioning his mother, wife and a disciple called Mary. This has a bearing on the modern discussion of whether Mary Magdalene was Jesus' wife, but there were at least two other disciples called Mary, one the sister of Lazarus and the other the wife of Cleopas.

The trouble is that the papyrus is a fragment the size of a business card, originally found in the Egyptian desert among a dump of ancient fragments, preserved by the Egyptian sands and the dry atmosphere, so much of the document  is missing. It is almost certainly part of the large corpus of Gnostic Christian literature that was circulating in Egypt at the time.

That the language of the document is Coptic is significant, as it shows that it is not one of the earliest Christian documents. Early Christian documents are written in koine Greek, the common Greek of the people. Carsten Theide discovered one early fragment that was written in what might be a local Palestinain dialect of koine and which might come from an early version of Matthew. It was but a scrap of papyrus. Maurice Casey, professor of Aramaic at Nottingham, writing in Jesus of Nazareth, suggests that an original version of Mark was written in Aramaic, but this is contentious. There have for a long time been sugestions that there was an early Aramaic version of Matthew, but neither Latin nor Coptic [Egyptian] were the languages of the earliest Christians. Yet the fact that the scrap is in Coptic does not mean that it is not a translation of an earlier Greek or Aramaic document. Experts in Eastern languages, of which I am not one, might if they had the whole documentt discern traces of an earlier tongue behind the Coptic, but there is not enough text available for this task to be done.

Mediterranean society was not female friendly. Jews, Greeks and Romans regarded women as second class citizens and were convinced that males were more valuable than females and that females could not exercise authority. Rabbis did not accept female disciples, and women could become disciples through their husbands, but they were on the fringe of discipleship.

Then along came Jesus. There is a passage in Luke 10:38-42 which shows that Mary the sister of Martha and Lazarus was sitting listening to Jesus' teaching, so she was performing the function of a disciple. This passage was included for a reason, which was to show that Jesus took women among his disciples. Another passage in the gnostic gospels has Peter scolding Jesus for having Mary Magdalen sit among the disciples listening to his teaching, as women were not worthy of eternal life. Peter was expressing a view held by many Jews of his time, but Jesus gently rebuked him and carried on teaching Mary along with the others. Furthermore, in Luke 8:13  we find that Mary Magdalene was one of the group of disciples who went round with Jesus,a group that included one Joanna, the wife of Chusa, Herod's steward.

These women were disciples, but not apostles. I need to explain the difference. Every Christian is a disciple on an equal basis. The apostles were a specific group of disciples charged with conveying Jesus' message and supporting him in his mission. But they were not any more disciples than the others were. Take an example. I, as  a baptized Christian,  am just as much a  disciple as the pope is, although he has responsibilities higher than I have and is certainly much holier.

So from the beginning of Christianity the church admitted women to baptism on an equal basis with men. The issue of women priests is about distinct roles that people have in the church, but both sexes are equally baptized disciples. The issue seemed to have continued to be troublesome for some gnostic groups. Gnostics have had a good press from people keen on an alternative to orthodox Christianity, but they were spiritual eliists who believed that there were three classes of human: spiritual men, who were saved by knowledge; men who could be save by faith and the church's ministry; and physical men who were not saved. Obviously the/gnostics   believed themselves to be the highest group. Among the vast plurality of Gnostic groups there was a wide range of opinion, and some among them would have thought that women, who were thought intellectually inferior to men, were unworthy of membership of such an intellectual group of clever chaps. Not all Gnostics were of this view, but there would have been some who were. The Jesus' wife fragment reflects the views of Gnostics who were in favour of women discipleship. They must have been having trouble from some sexist males  and produced a piece of literature to  support and express their views.

There is no unanimity about this papyrus. The Vatican dismisses it as a forgery, but whether they think the forgery is modern or ancient is not clear. Depuyt, a  scholar of Copticism, is scathing. He believes that it is the work of a poor quality forger. His reason for thinking this is that there are errors in grammar that no one with facility in the Coptic language would make. He also believes that the ink could easily be replicated by any student with some knowledge of Coptic papyri. However, there are problems with this criticism. Not every Christan writer was adept at grammar. It might be the case that the original from which this papyrus was copied was in Greek, but that someone with a less than perfect knowledge of Coptic translated it. This would mean that it was not a deliberate forgery, but  this does not tell us that its contents are true.Depuyt suggests that the language is redolent of the gospel of Thomas, which was probably written in Egypt, which suggests that it is a forgery.  But this could simply indicate that the writer was influenced by this gospel.

Dr King, of Harvard Divinity School, has had the text scientifically scanned. Her conclusions are that the papyrus was made in between the fourth and the eighth centuries, probably nearer the fourth when Gnosticism was still strong. The ink is also of that period, which discredits the claim that it is  a modern forgery.

Nothing can be concluded from this papyrus. The text is not early Christian and we can find no evidence that it is a copy of an earlier document. Gnostics produced gospels on a regular basis, and St Irenaeus complained that they were producing a  gospel a week, Surely an exaggeration, but it does indicate that there were many inauthentic gospels going around

There are claims that Jesus had a wife, but no wife has ever been mentioned in writing or oral tradition. Jesus' family were well known in the first seven centuries until the Muslim invasions, when they disappear from history. There is no record of their having spoken of Jesus as having a wife. While rabbis are expected to be married, celibacy was common among the Qumran community, with whom Jesus possibly did his rabbinical studies.

The disciple called Mary seems not to have been his wife, but was it Mary Magdalene or the other Mary about whom they were speaking? Jesus was certainly physically close to Mary Magdalene. One gnostic gospel says that he used to kiss her, and in John's gospel when she realizes that the man she thought was the gardener is Jesus she makes to embrace him, but is put off. These texts indicate some physical contact, but that is about as far as it goes. There is no evidence of marriage or any contact deeper than kissing. In the Gnostic document Jesus simply asks the disciples why he should not kiss them in the same way. It seems that he valued physical intimacy.

Your observation about the timing of the report is insightful and valid; and I must confess I missed seeing it. Thankyou!

People make a lot of the Gnostic Gospels, and it is irritating, as most of them were written long after Jesus. What I believe is that Jesus taught a doctrine accessible to ordinary folk, not just to intellectuals. But Gnosticism tried to reduce it to an intelellectual and elitist movement accessible to the few, which is a major error. The Catholic view is that theological truth is accessible to everyone who works at it. There is no higher truth exclusive to intellectuals. So goodbye Gnosticism.

Hi Frank, I don't put much stock in the gnostic gospels, because, as you pointed out, there were many forgeries. I find it interesting this appeared in the secular press, not a friend of Christianity, just before Holy Week. 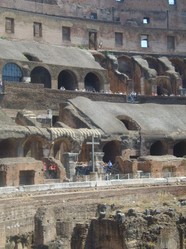