The result of some weeks of research and searching for a reasonably priced Double Edged Blade safety razor. How I re-discovered the simple pleasure of having a good shave.

This is a record of my ventures in changing from the Multiple Blade Razors commonly available back to Double Edged Blade shaving. It is an ongoing record of shaving and the ways that you can make your life simpler and your shaving more enjoyable. It started as an experiment and has turned into a way of life for me.

I recommend every man to try it.

The razor arrived before due date and as advertised.  I was more than pleasantly surprised, The moment I picked it up it felt right.  Not too heavy and balanced with the long handle.

From my first shave I felt at home and it has been great.  A good buy.

I must add that I also received a box of Shark DE blades to try.  They're ok but I still prefer my Supermax at $6 for 200!

The other thing I have tried out is a different shaving soap and bought a tub of Proraso Green.  Wow!  This takes me back to the days of my old Barber, Len Hardiman, who shaved me for special occasions when I was in my late teens early twenties.  That was FIFTY years ago. Either he was using the same product or one so similar that it brought back memories of his shop.

It is well worth the extra cost!

It has been 16 months since I went back to Double Edged Blade shaving.

I am still as enthusiastic as before.

This is the Review I wrote recently on Amazon ~

Adding to this I must comment about the two razors I have been using.

The Wilkinson Sword Classic is rather light and I have had to use more strength than with a heavier razor. In addition it became clogged up with lime scale for I live in n area where the water contains a lot of lime. I started boiling filtered water some four months ago. After soaking the razor in s=white spirit vinegar this problem was removed. However, whether as a result of the scale or some other cause the razor does not seem to work as well as at each blade change the tightening of the two parts seems to be different.

In my original article I stated that I ordered an Edwin Jagger ~ however I was being premature for in fact, for some reason I cannot recall it never arrived,  Out of stock for that model, I think.  So I ordered this one. The Shaving Factory Double Edged Razor

I did not expect much as it was very cheap compared to others but I was pleasantly surprised, It is solid and gave a superb shave.  It is a Twist to Open (TTD) or Butterflly razor.  The lime scale played havoc with it.  However, it worked well.  And is still working well despite experts saying that this type of razor only lasts for a year or so.

Having become addicted to Wet Shaving I have ordered a Parker 96R and am looking forward in anticipation of my first shave.

Turning now to brushes.  I have had a Wilkinson's Boar Hair brush for about ten years.  I decided to go back to the Badger Hair Brush I used way back when I was in the Army.  So I bought a an Edwin Jagger

Wow ~ what a difference!  I really love this brush.

That is all for now ~ will report again next week.

Why on Earth should I want to shave?

I have a beard.

Why on earth should I even be bothered about shaving if I have a beard?

Well let me tell you why.  You see my facial hair grows thick and fast, unlike the hatr on my head ~ blast it!  If I leave it to grow fully it almost makes my eyes disappear.  And I have difficulty wearing a collar and tie or even a scarf.  In fact whilst on a visit to Canada one winter a few years ago I was mistaken for a Hobo by an old acquaintance from South Africa whom I had not seen for some years.  Then a few days later I was standing outside a Mall in Burlington, waiting for my son and his wife whilst watching the world go by and drinking a coke out of the can.  A lady came up to me, patted me on the hand and said the Canadian equivalent of the South African expression, "Ag shame, hey. Enjoy your Christmas." She then stuck a ten dollar bill into the can, leaving me speechless.  When I tried to call her back she almost ran away.  So I kept it until I saw a Charity Box.

So, what is the big deal then about shaving?

Again, I am going to bare my soul here.

You see, over the last two years alone, I have tried every sort of razor I can find.  Double Blade; triple blade; quadruple blade;  now there is even one with five blades.  The snag is that each time you buy one the blades to fit are taken off the market place,  You go back to replace the blades because this one was the best only to find you cannot get one.  Even the packaging is done in such a way as to conceal the connection. I found only one blade that actually worked.  I bought five cassettes.  After that zip, zilch and not one of the newest ones gives a good shave for all the hype.  The latest one was a Wilkinson Sword electric vibrating four speed monster with a beard trimmer.  Both the shaving blade and the trimmer clog up and jam the vibrator.  And to add insult to injury I have spent almost hundred pounds on the handles alone.

Then comes the goop one is expected to shave with.  Costly, smells good but stings.  And it doesn't even give a good shave.  No idea what I spent.  I finally used Pears Soap and that was the best and it isn't for shaving it is for washing!

Problem, reaction ~ what was the solution?

When I was a youngster in the forces etc, I had to shave every day and very closely.  I never had this problem.  Why? Was I young and tough?  Not really, I was a wimp. So what was the difference? The penny dropped.  In those days one could only get one type of razor, the old Double Edged Saftey Razor, designed in the early 20th Century by King Gillette.  You could get really expensive ones but the one I used was a Gillette.

OK, so let's try that type.  I visited every man's shop in my city of Basingstoke but no go, nothing, zip, zilch.  "Why not but one of these modern ones?"

So I went to the trusty old Web and Googled Double Edged Razors.  Amazingly there are many, many makes and suppliers.  The prices range from about £27 to over £70.  Mmm.  What happens if it doesn't work.  Then on my account at Amazon.co.uk I found a Wilkinson Sword DE Razor. So I sent for it. Only £6 including postage and it arrived two days later (I ordered it at night). And that included FIVE blades.

Then I tried it out.  Not the best shave, I must admit.  However, there were three things making it difficult.

Still it was pretty good.

That was the razor taken care of.  Let me now go in and get some shaving soap, the old fashioned kind. I went around all the shops and pharmacies in Basingstoke.  Eventually, I found some in Boots the Chemist ~ their own brand.  It was hidden at the bottom of the shelving beneath all the expensive goop.  Not enough profit if everyone takes up shaving the old fashioned way? I also bought some skin shaving balm.

Today I used it to shave for the first time and you know what?  I enjoyed the experience.  It was great.  The first time in years, literally, that I actually enjoyed shaving and my face has a good healthy glow, not the normal painful, irrtated glow of the past several years.

Want to learn more?  Why not go to The Mere Cat Blog

This is the Razor I first used and was so impressed with.

Read the Reviews ~ I am becoming a Shave-a-holic!

It has been 18 months since I went back to Double Edged Blade shaving.

I am still as enthusiastic as before. This is the Review I wrote recently on Amazon ~

Ha, ha sounds like a mission. Glad it was mission solved though.
Re the Wilkinson Sword electric vibrating four speed, bear trimmer?? Maybe you should try ones for humans rather. :-) 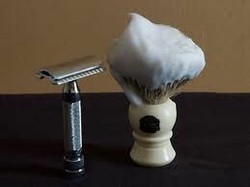 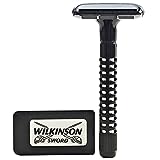