More than a ship, this is a fascinating snapshop of Tudor life shown as never before, with artefacts from nit combs (complete with dead lice) to leather boots, dice, and long-bows.

Walk into the bowels of the museum between the conserved starboard section of the hull and the virtual hull and look through a series of windows to the starboard hull held within a carefully controlled environment created over 3 levels to give different aspects over and around the decks of the ship. Mirrored on the walkways which follow the shape of the deck from stern to bow are the cabins and the artefacts that would have furnished those cabins.

An amazing 19,000 priceless objects are on display, the largest collection of Tudor artefacts in the world, including the skeleton of the ship's dog and a skeleton of one of the archers, surgeons instruments, wooden trenchers, purses, wooden rosary beads, and even a piece of wood still smelling of tar after 500 years. The spaces are kept dark, the only lighting being that focused on the objects, thus creating the feeling of darkness that the original sailors would have experienced.

Launch of the Mary Rose Museum

The launch of the Mary Rose Museum took place in and around Portsmouth Historic Dockyard on the south coast of England in the UK, and at Southsea Castle just a mile or two away, from which King Henry VIII originally watched the ship go down with the loss of nearly all hands: out of 400 only 37 survived.

A symbolic wreath laying ceremony at the wreck site in the Solent began just before 8 am.  The ceremony was directed from a WW2 boat surrounded by a number of smaller boats which had come along to witness the ceremony.   After this came the symbolic return of the ship's bell to Portsmouth Naval Base and the Museum led by water cannon tugs, the Royal Navy, the Sea Cadets and the band of the Royal Marines to the accompaniment of an 11-gun salute.

Despite the rain and the lowering grey skies, by 10.30 we were in place on the ramparts of Southsea Castle for the flaming arrow volley conducted by the Purbrook Archers in authentic Tudor Dress who were on hand to demonstrate longbow weaponry.  The largest collection of longbows anywhere in the world was found on board the ship,  Attending also was British actor Robert Hardy who is a known expert on the longbow and was responsible for restoring many of those recovered from the sea and TV presenter Sandi Toksvig who is also Chancellor of Portsmouth University.

Evening ushered in a grand finale to mark the return of the ship's bell to the museum with a procession from the Victory Gate to the big anchor.  A Tudor festival had been taking place all afternoon in the Port Arena of HMS Victory (Nelson's ship which is moored there) with 16th century music and songs from strolling players and experts on hand to explain how materials were dyed, how carpenters worked, what foods were available etc.

A fanfare from the rooftop of the Museum by the Royal Marines Band heralded the entry of the ship's bell into the arena with a Naval escort, the giant Tudor flag that had been covering the entire Museum was lowered, and then the full Royal Marines Band performed a concert to an appreciative audience.

And now one of the world's greatest museums is open to the public.

Costing £27 million, the design by Wilkinson Eyre Architects (architect and design team leader) and Pringle Brandon Perkins + Will (architect for the interior) combines conservation, contemporary architecture and specialised expertise to create a museum that is truly magnificent.  It has been compared to a jewellery box housing a precious gem and it effortlessly showcases and complements the ship in ways that articulate the story of the times.

The simple elliptical form of the building echoes the shae of the Mary Rose and the timber has been stained black to reflect England's vernacular boat shed architecture with inscriptions drawn from the ciphers used by the crew, carved into its shell.

Two museum interiors have been designed, the first we see today for the period 2013 - 2018 and the second for the period after 2018 when the Mary Rose will be removed from her protective cocoon where she is continuing to be dried.  On completion of this part of the conservation process the context gallery walkways will be opened and the ship and all her contents will be seen together.

This museum is unique - the only one in the world to be influenced by the archaeological finds of the ship itself.

Click here for further information on all aspects of the Mary Rose plus opening times and prices.

I love the pictures you have shared here. One suggestion - say exactly where this ship is - some place near the beginning. There is more than one Portsmouth in the world and I don't live in England so at first I was wondering.

Thank you Mike, I must remember to link the other Maryh Rose article, the one about the forensic reconstructions. It helps even more to understand the whole concept.

An interesting exhibition, Maritravel as well as a greatly presented article.

Thanks for the pictures and info, I like Portsmouth a lot and really want to see this! 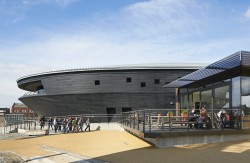