The man who ran to the gallows

Death need not be frightening to martyrs,for there are near death experiences that happen as death impends

The Catholic martyr Roger Wrenno died on the gallows at Lancaster Castle in 1616,but he was not afraid to die, but hurried up the steps to the gallows,enticed,maybe delighted at the vision vouchsafed to him prior to death. Wrenno is not one of the most famous Catholic martyrs,but his story is worth teĺing,as is the story of his priest companion John Thewlis.

Photo courtesy of Northern_Punk, of Pixabay

Being a Catholic in seventeenth century England was no picnic. The penalty for your love of the mass could be death or imprisonment, and refusal to take an oath to accept the monarch as head of the church was high treason punishable by death by hanging, drawing and quartering, a process that I will not describe on a family site. Thus, it was when Father John Thewlis [Thules] set off for England in the early seventeenth century after completing his priestly formation in Rome he was fully aware of the fate that might await him and anyone who assisted him, the fate that met his assistant Roger Wrenno [Wrennall] the subject of this article.

Thewlis had been born in 1568 at Upholland in Lancashire, a pleasant piece of land slightly elevated above the then swampy lands of South Lancashire, but left at fifteen to train as a priest in Rome. Ordained at twenty four he made his way back to England where he was to begin his priestly mission.

After a short ministry Thewlis was arrested and imprisoned in Wisbech Castle, but whether through skill or incompetence by jailers he escaped. It may be that certain jailers were sympathetic to the old faith and were aware that the holy men whom they were imprisoning were a far cry from the hardened criminals who were the normal denizens of their dungeons and so left doors conveniently open. Bribery cannot be excluded. Thules headed for his native Lancashire, a hotbed of the old faith and a thorn in the side of the government.  It was there that he met with Roger Wrenno, a layman and a poor weaver, but a completely dedicated Catholic who risked all to be the priest's assistant.The two men formed a dedicated team and ministered for some years in the heart of North-West England's  hotbed of Catholicism, ministering in the area of Central Lancashire centred on Chorley.But success brings danger, and soon their work came to the attention of William Stanley, the Earl of Derby, fanatical Protestant who hated Catholicism.. Thewlis and Wrenno were taken and deposited in Lancaster Castle, where Thewlis continued his priestly ministry, converting four criminals to the faith. Thewlis and Wrenno were heading for real danger.

The authorities had Thewlis and Wrenno, but there was no doubt which one was the prize catch. Wrenno was a peasant, a lower class man, but Thewlis was a priest. But strangely, it is Wrenno's experience that has the greater emotional significance.

Persecutors like their victim's to verbally agree with them, for agreement feeds the inquisitorial ego,and superficial submission wiĺl suffice. The priest was the main target. The authorities tried to seduce Thewlis into betraying his Catholic faith by getting Wiliam Ash, Thewlis' godson to offer him twenty pounds a year, then a princely sum, to abandon his faith, but Thewlis was steadfast, he was ready to die rather than betray his beliefs. Wrenno was offered nothing. He did not matter much. There were plenty of peasants. Next the authorities sent Wiliam Leigh, Stanley's chaplin,a renowned Protestant preacher t o dispute with Thewlis, but to no avail. Thewlis stood his ground, knowing that what he was doing would bring about his death. No one disputed with Wrenno. Eventually the authorities stopped trying to turn the two. They were both sentenced to death.

In the period that elapsed between sentence and death the two men escaped again, probably aided by Catholic sympathizers, but they did not get far and were soon apprehended. This time there was to be no escape. Death was imminent.

Execution and a Vision.

The execution was scheduled for either 1615 o5 16, the dates are imprecise. Thewlis went first. There was an offer of mercy if he were to renounce his faith,but Thewlis refused and walked to the gallows erected in Lancaster Castle. The execution took place without incident. Then it was Wrenno's turn. He walked to the gallows,the rope was put round his neck, the lever was pulled,but after a short time struggling to breath, the rope broke,sending Wrenno tumbling to the floor.While a new rope was called for the sheriff of Lancaster tried one last time to get at least one to abjure his faith,but Wrenno was steadfast.

The new rope was fixed and made ready,but to the surprise of spectators Wrenno ran to the gallows and eagerly mounted the ladder. When the sherrif saw this he wondered aloud as to why this man was so keen to die. But Wrenno is reported to have said "If you had seen what I have seèn you would be impatient to die. I have seen the good things of God." He was then executed. It seems that the insignificant peasant not deemed worthy of a bribe or a disputation with a famous minister had during his brief strangulation had a profound religious experience in which he saw what lay beyond the veil of death. So powerful was Wrenno's experience that death lost its power to scare him.

It is a Christian belief that God privileges the simple with special blessings. Maybe God decided that he would honour the simple faith and great steadfastness of this very ordinary, in the sight of the world, man. We do not know the details of what he saw, perhaps they y were beyond mere words.

Spellings in the seventeenth century were erratic, and Thewlis was sometimes known as Thules. For comparison Beswick was Beacswyke. I suspect that the actor whose surname is Thewlis might have a genetic connection to the martyr.

Thewlis does not appear among common surnames on the west side of the Atlantic pond. Is it rare on your side?

Would actor David Wheeler, who goes by his mother's maiden name Thewlis, be descended from a John Thewlis ancestor, relative or sibling?

There were spectators at the execution who heard Wrenno's response to the sherrif's pondering aloud as to why the victim seemed so eager to die. The story was spread and eventually reached Catholics in Europe who recorded and preserved it.

How was the account of an apparent vision witnessed? Did he address those gathered. 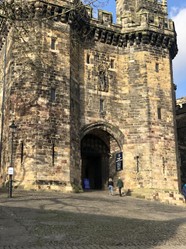