The Monks Return to Whalley

After nearly five hundred years monasticism is to return to Whalley Abbey.

Fifteen thirty seven was a bad year for Whalley Abbey, as the king's commissioners arrived to steal the abbey's property, but even worse was the subsequent execution of its last abbot for his role in the Pilgrimage of Grace the preceding year. Who was to know that in the twenty first century times would change and that the Church of England would be rethinking its relationship to its Catholic heritage and that a small and original monastic community would be established at Whalley?

Photo courtesy of brigsteer, of Pixabay

The History of Whalley

Amid all the  bad news that besets us I was heartened by a small item on the BBC's North West news, which covers Lancashire, Cumbria and Cheshire. As one who celebrates England's Catholic traditions and mourns the destruction wrought by the tyrannical Henry the Eighth, I was filled with joy. Four hundred and eighty four years after the murderous expulsion, monks will be back at Whalley in central Lancashire. True, it will not be the order of monks who were expelled, and they will be Church of England rather than Roman Catholic, but what does that matter? A wrong is in the process of being righted, that is what matters.

Whalley was home to Cistercians, silent penitential monks who sought lonely places in wildernesses if possible where they could pray and keep sheep. An offshoot of the Benedictines they first came to England in the late twelfth century. Shortly after the arrival of the first Cistercians a group of them were invited by the Earl of Chester to establish a monastery at Stanlow [meaning small stony hill] near the mouth of the river Mersey. For some years the site thrived, but geography was against it.  First there was a flood, not surprising considering that it was on a flood plain. Next the church tower collapsed in a gale. Finally not long afterwards there was a fire. A new site was needed. Progress was slow, but a site was found near Clitheroe by the banks of the small river Calder. The monastery  was slowly and steadily rebuilt, and the development continued up to the time of the last abbot, Adam Pawley, who rebuilt the abbot's quarters and added a lady chapel, dedicated to Our Lady. During this brief period of three hundred years the abbey thrived and became one of England's great abbeys. Then in 1537 the king's commissioners arrived to loot the place. The abbey's lands were confiscated. When Catholic Northern England arose in protest at the Pilgrimage of Grace in 1536 the rebellion was crushed with maximum force and savage reprisals, and Adam Pawley went to the scaffold to be hung, drawn and quartered for his pains.

In 1553 the house and lands were sold to a pair of businessmen/landowners, one of whom took the monastic buildings as his share. While much of the site remained intact he tore down the abbot's quarters and the infirmary to make room for a house, which you see in the picture below. The house almost certainly contained stones taken from the abbey and included a small section of the abbey buildings. In the next century the abbey church was torn down. Some buildings, including the gatehouse, now roofless, survived.

The house, known as Whalley House, underwent several changes of ownership, but for some reason the owners respected the abbey ruins. People in general respected these bare ruined choirs, and Lancashire is an area where Catholic sympathies remained strong. Nearby Preston still has an Agnus Dei as the town's badge. Furthermore, while the more extreme forms of Protestantism were known in England, Anglicanism, the Church of England, has retained its Catholic heritage and is traditionally tolerant. In the nineteenth century the Oxford Movement began a revival of the Catholic traditions of the Church of England.  On a small scale Anglican religious orders, Benedictines and Franciscans, sprang up. Suddenly there was hope for some monastic buildings again.

Certain important figures were supportive of the Anglo-Catholic cause. One was Bishop William Temple, bishop   of Manchester and later Archbishop of York then briefly  Archbishop of Canterbury. He was known for his tolerance, social concern and scholarship, and was a broad-minded man receptive of a wide range of ideas. He was therefore open to those who wanted to uphold Catholic traditions. He also reversed the policy of his predecessor, Bishop Knox, who had resisted splitting the over-large Manchester diocese into two. He concurred in separating the northern half into the new diocese of Blackburn. But before the split in 1923 he authorised the  purchase of the whole Whalley Abbey site, house and ruins, by the Manchester diocese. The ownership went to the Blackburn diocese on its  establishment.

Archaeology and refurbishment went hand in hand. In the 1930s excavations revealed the foundations of the abbey church, which were then conserved. These were added to the remaining ruined buildings: the gatehouse, and various buildings known as ranges, a name for  country buildings akin to farm houses. The house was refurbished by the conversion of two rooms into chapels and with accommodation suitable for a small community and guests. It was to be used as a religious education centre and retreat house. In 2005 there  was further refurbishment. Some monastic buildings were restored. The North Range became a visitors' centre and restaurant, whereas the West Range, in keeping with the ecumenical spirit of the process became a Roman Catholic church hall.

A new warden has been appointed to take the project forward, but he is not an abbot, but an ordinary priest. Whether Whalley will be an abbey ruled by an abbot again is yet to be known, but the warden is preparing for the arrival of a monastic community by September. In some ways it will be a traditional community, run as are all western Christian monks by the rule of St Benedict, celebrating the monastic hours of prayer, known as Divine Office, but in other  ways it will be modern, as the monks will not  wear habits, but normal clothes. Furthermore, they will include full time monks and temporary residents, people who want to spend some time in a monastery longer than a retreat.  However, new for this time is that the community will contain males and females. This harks back to an ancient tradition, until now extinct. Traditionally, such communities were governed by an abbess, but who will govern Whalley is yet to be determined, though there is no barrier to its being a woman.

The new community  will focus on a ministry of healing, apt for a building set on the site of a monastic infirmary. Nowadays hospitals heal bodies better than monks can, so the community will focus on healing hearts, minds and relationships. It will do this through evoking the healing power of the gospel, using counselling and prayer.

The original Whalley Abbey lasted from 1306 to 1537. Let us hope that the new abbey will last much longer. A new shoot grafted onto an ancient trunk, new vigour from old roots. I welcome Whalley's second coming.

Thankyou for this information. I have made the effort to study every major religion in the world, but the subject is so vast that there will ever be more to learn, and you have told me something that I did not know.

I am in awe of monks. Buddhist monks who renounce would also take the vow of silence. Same with the Nuns. It is essential to free the mind from the garbage and commotion to concentrate. On a similar note to your article, in India soon after King Ashoka died - mass execution of Buddhist monks and destruction of monasteries began. Brahmins who wanted Hindutva to spread everywhere demolished Buddha Vihars (in present Bihar) and turned into temples. The famous Tirupati temple adorns an idol which today people worship as Vishnu. Archaelogists and Researchers have argued that it is actually Buddha's idol. The priests of the temple will not allow any investigation and the idol to be touched. During Buddha's time there were no clear Deities defined. People worshipped Deities of Sun, Water and Wind. All religious deities came later. I have seen idols of Buddha converted to Hindu Gods.

Abbot Pawley was not torn apart, but partly hanged and then cut up. As Wizzley is a family site I won't give details. We don't know where he was buried or what happened to the body.. He was not permitted last rites

frankbeswick, Thank you for the practicalities, picture and product.
Do you cover Whalley in your book?
It's awful what happened to Abbot Pawley. Was he given proper burial? Was he permitted last rites? Whether he was or not, where would they have placed what was left of him after being pulled in the cardinal directions by four horses? There surely would have been those who would have wanted to step lightly around his burial place.

I saw this item on the news. I love Whalley Abbey. it is a great day out.

Some joint working happens, but there are obstacles, such as women's ordination.

A bishop can administer all sacraments, but while an abbot can confirm he can only ordain to minor orders, unlike a bishop who can ordain fully. Thus an abbot can ordain up to the rank of acolyte, but not to priest or deacon. Abbot is not part of the threefold ministry of bishop, priest and deacon.

An abbot can fulfil many of the functions of an auxiliary bishop, subject to the limitations that I have just stated.

It is good that the site is being given back to God and His usage.
Are there any efforts or progress with having the Anglican Church reunite with the Catholic Church? It had come up as a possibility in the past, as with the Lutherans, but the issue of female priests has become a major obstacle.
You mention the priest is not an Abbott, It is my understanding an Abbott is equal rank with a Bishop, since our local abbey has sent its Abbott to assist with Confirmations in the past. It my understanding of rank here correct? The local Abbott is is considered like an auxiliary bishop, of which we have several for different ministries, Hispanic and Black in particular. 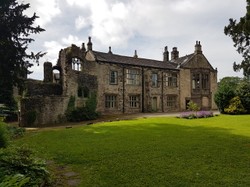 The Original Name of God19 days ago

Shoots Out of Eden - Christian Monastic Gardening in the Briti...
100%  21   12 frankbeswick
Christianity