A worldwide network of religious sisters is combating human trafficking.

Amrat is not an organisation, but a network. Religious sisters, sometimes known as nuns, belonging to a wide range of religious orders and societies, are a key part of the world's anti-trafficking operation. Spread across a wide range of countries these devout women work tirelessly, often in danger, to rescue women and girls trapped in various kinds of servitude, sexual and domestic. At a time when the Church's leading males have come in for much criticism, these women are setting high standards of Christian commitment.

Imagine.Night time in an Indian town. But there is a house that does not sleep, or rather, whose occupants snatch slumber between clients. But the comings and goings have been noticed, Someone has whispered to the nuns that there are  slave girls inside. The nuns quietly gather what evidence they can. Satisfied that there is something wrong, they contact the police, who greatly value the sisters' work.

The police strike quickly so as to prevent the traffickers from getting their slaves out of the  way. As the police cars surround the building and the armed officers burst inside, the two women in the rear seats of one car put their rosary beads into their bags and are escorted indoors. The sisters of Amrat, India's network of antislavery nuns, are beginning a long night gathering evidence, interviewing girls and giving emotional support to girls who often burst into tears on their liberation. In many areas the police greatly value these Catholic nuns' expertise and take them on raids because of the quality of the evidence that they can provide.

Let us take an imaginary, though fully typical young slave girl. She is sixteen and was raised in a remote village. She was not doing well at school, so her prospects  were low. Indira, that's what I will call her, met some charming young men, one of whom gave her a mobile phone and bought her gifts. Then he persuaded her to give up school and follow him to the city, where a comfortable and prosperous life awaited her. Slipping off with him was her greatest mistake, for her  dreams turned to nightmares as she found herself trapped into slavery. Her parents reported her missing, but in the overpopulated cities of India one missing girl will not be noticed. But Amrat have made a note of her name and placed her on their database. The aim is to get Indira protected, healed, and home, hopefully to resume her life  and education.

Amrat is not a conventional NGO [non-governmental organisation] for it has limited bureaucracy and relies not so much on states, but on the organisational structure of the Roman Catholic Church. While most NGOs are town based, as you would expect from organisations linked to governmental structures, Amrat extends out into the villages.This means that it can encounter vulnerable people who might otherwise slip the net. A key part of its role is education for prevention, informing often naive, under-educated, impoverished people of the dangers that lurk to prey on vulnerable young girls [and boys] at the hands of seducers brandishing cash and deceptive inducements.

While Amrat is exclusively Indian, it is an element in a global religious women's network that is doing wonderful work quietly and without any thought of personal gain.

I met the network once when I was in Crete on holiday. As usual we attended church on Sunday where we encountered Mother Teresa's Sisters of Charity. This small group of  nuns had been invited to act as guardians to the Filipino girls  employed in Crete. The sisters were the focus of the community and they kept a watchful eye on the girls' welfare and were ready to report any threats to their safety.  This was quite an easy posting. But not all postings are as safe as this one.

The work is often  arduous and sometimes dangerous. The danger comes from being women who have annoyed the human traffickers, who are violent, often armed and vengeful. The sisters must have the social skills to read situations and to know when to withdraw and seek help.Let us be clear, the sisters are themselves vulnerable to attack,and to make the situation worse, in remote villages in places like Assam in India they are often far from help. I mention Assam because its poverty and lack of development  place it at the start of the conveyor belt of girls for the global sex trade. Such is the level of poverty that parents sometimes sell their daughters into servitude, domestic and/or sexual.

Often the sisters have to travel long distances to reach a village, and with the transport that they have available the sisters start early and finish late. And this can be a daily grind of tiring work. Staying overnight is not always an option, and if it is, the stay may not be comfortable. Moreover, the sisters themselves are vulnerable to attack by the men behind the woman trafficking operation. So the sisters often take risks and need to keep their brethren fully informed as to where they are going.

In Europe the sisters involved in protecting woman and girls work in conjunction with police, social services and immigration officials. In Europe they would not accompany police on raids, as there is no need, and they concentrate on the healing side of the service. Few people in the West have heard of what the sisters are doing, often in their own cities. The reason for this is that the operation must be conducted discretely for the safety of all involved.

What Kind of Work is Done

The sisters' steely courage is born from a life of prayer. Each has discerned a vocation to work for charity, so she has joined an order or religious society some of whose work includes dealing with women so mistreated.  Her superiors have then selected her for this task. The prayer life is an essential  daily activity, as it sustains the sisters' religious commitment, and so the life of prayer should be regarded as an essential part of the work.

Much of the work is educational. Women and girls in the villages and small towns are given courses  to warn them of the threats that loom over them. An important element in this educational strategy is to encourage girls to remain at school, for having an education undermines the false promises of the slavers. When a girl sees the possibility of a good job she is less prone to run off with seductive males. Parents are also educated to show them the dangers of handing over their daughters as domestic servants.

For girls rescued from slavery who cannot safely go home there are  rescue centres, but sometimes girls have to be moved a long way from the ones who enslaved them, and so they need ongoing emotional support. Sometimes this support needs to last for years. The sisters are not tied by the economics of running a charity, and so they commit to helping these women and girls for as long as it takes.

The sisters know that healing traumatised girls cannot be effected with the wave of a magic wand. Very often all that the sisters can do is patiently accompany their charges in their suffering. Simply holding hands and being a shoulder to cry on is an often overlooked element in the caring and healing process.

The work does not bring fame and fortune, nor does it bring power. But it does much good for the hurt people in the world. These sisters deserve our praise.

The church runs them in co-operation with the state. Funding comes from church charitable funds, but other sources, such as the state,help. The state provides protection.

frankbeswick, Thank you for the back- and front-stories about Amrat and for the products. Are the rescue centers, for those rescued but not assured of safe returns home, run by the Church, the community, the government or the sisters? 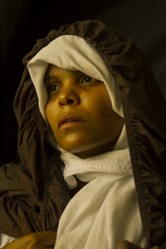