The undermining of traditional values by repressive means has caused grave consternation among societies and groups. We are now witnessing the violent reactions from it.

Why is it in this digital age, when there are seemingly so many opportunities and options available, that freedom is becoming more and more restrictive? We are seeing it constantly everywhere with a proliferation of more rules and regulations that are steadily and relentlessly creeping into our everyday lives. Increasingly it seems that 21st century humanity is being constrained into a box....to the manipulations and whims of the few. Genuine real power and freedom is beginning to look like fiction and an illusion.

We are in fact, entering a new age of frightening unrestrained barbarism on a scale unknown since the dawn of civilized history. The more individuals attempt to freely express themselves publicly, the more obstacles they encounter and yes....repression. It is no wonder that we are witnessing on an expanding global scale, the flowering of explosive mass violence by different groups of society in an attempt to restore some semblance of human dignity. Overnight it seems, that long standing cultures, traditions, faiths, creeds, business, financial and medical practices that stood the test of time are being relentlessly subdued, and subverted. In the financial sector, monetary policies have emasculated the real meaning of profits, enterprise and even of self worth.

The modern health care system is in a current state of constant crises in dealing with skyrocketing costs, and rampant catastrophic degenerative diseases with no effective cures. Ancient cultures are being threatened with the advent and onslaught of pervasive and invasive new media threatening to undermine those societies’s structures, language and very existence. Fragmentation and distraction seems to be the new norm these days, as individuals are being drowned in cybernetic information graphic overload, with the inability to focus, or have the time to reflect. Recapturing and rescuing the very center of one’s existence is becoming ever more difficult to accomplish in these times.

The disturbing consequences are all too evident in today’s headline news, with shocking stories and images of school shootings and public bloodbath killing scenes. News reports of such incidences are instantly spread everywhere and described with every possible available media technique. Yet as with everything else, it only seems that the true of cause of all this trouble is being consistently and persistently masked to the marked detriment of society as a whole. Even more ominous and disturbing is the fact that are now fewer places to take refuge from these modern day terrors due to the presence of ever increasing surveillance….imposed on a universal scale. We have entered a perilous tipping point of no return. 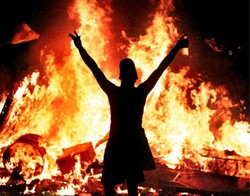