The Singularity—The Future of the World?

For more than half a century, scientists have pondered the possibility that computers or machines will become more intelligent than humans. Should this occur, the question arises—will machines take control of human beings and the planet as a whole? As has been the case with many perplexing scientific inquiries, this matter is fraught with much controversy [1, 2].

Progress with the development of machines and computers has been phenomenal during the 20th and 21st centuries. Workers have lost their jobs because machines perform certain tasks more quickly and efficiently than humans do. In 1960, I.J. Good wrote that there would eventually be an ultra-intelligent machine. In 1983, the science-fiction writer Vernon Vinge wrote about the singularity in which these remarkable events could occur [1].

Since humans create these machines, and one of them may be more intelligent than any human, the highly intelligent device may end the development of any further computers or machines which men or women could ever create.

The increase in computer speed and information processing has already taken place. However, it has not grown to the point where these machines take control of humans.

Potential Benefits and Dangers of Singularity

Several questions will arise among scientists as well as the general public.  First, what are the benefits of a singularity?  Second, what are the risks or possible hazards should it occur?  Third, will humans still have an identity when singularity takes place?

Many researchers believe that this event will lead to remarkable disease cures.  Obviously, society will consider that to be beneficial.  There may be other scientific advances, and singularity may solve the global problem of poverty which no world leader has ever conquered in its entirety [1].

Dangers of the singularity may include war among machines, the end of the human race, and the ability to destroy the planet [1].  There will be many questions about legal, social, and political matters across the globe.  Will machines have the same morals and values as humans?  Humans want to see scientific progress in the world as well as peace and justice [1].

If machines do not have the same values as humans, will they force humans to change theirs?  It may be that the creation of artificial intelligence requires slow development in order to become aware during its early stages how much control of the planet they may be able to achieve [1].

Some have wondered whether it will be possible to program the machines to maintain the same or similar values that humans have.  Others have suggested that learning and evolution will be the means to create artificial intelligence.

The singularity may have come close to occurrence in the Disney movie How to Build a Better Boy with co-stars China Anne McClain and Kelli Berglund.  In the movie, Berglund’s father is an engineer who has a contract with the United States Department of Defense.  He has equipment to create super humans.  The two girls decide to create a perfect boyfriend for Berglund, and they hack into her father’s computer system as well as that of the U.S. military.

Though the man who they create is handsome and possesses unusual capabilities, he is not human.  There are problems with the relationship as well as his interactions in the community.  The Department of Defense becomes aware that something has occurred, and Berglund’s father has to explain it to his superiors.  Meanwhile, the girls are under government investigation.

Ultimately, everyone realizes that it is necessary to destroy the “better boy.”  This poses an issue with Berglund in light of her romantic attachment to him.  The only way to eliminate him is to command  “self-destruct,” and Berglund is the only person who can execute that.  With only a matter of minutes and eventually seconds left before the world will come under the supervision of machines, Berglund gives the command for her artificial boyfriend to self-destruct.

The story of How to Build a Better Boy, therefore, has a happy ending, and the girls realize that what they have built will never be the answer to the natural imperfections of partners in a relationship.

Though there has already been an enormous influence on human life through the creation of machines, it still may not be clear that computers will someday take control of the planet.

3.  The photo shows the library at the Centers for Disease Control and Prevention in Georgia and is reprinted with permission from CDC/James Gathany. 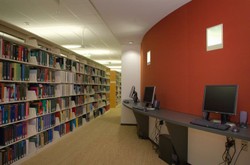