Welsh industry was based on mining coal and quarrying slate. The purple Cambrian period slate found in Snowdonia made ideal roofing material and was exported around the world. The slate industry is now extinct, due to new roofing materials, but heritage is a modern interest. This heritage trail leads walkers round the quarry sites of Snowdonia National Park through beautiful scenery. The walk is challenging and takes five days or more, but there are ample places to stay en route. It makes a rewarding journey.

In  article I am passing on the baton.  For years I have walked and written in the first person about my experiences, but here I  will write about places that I know on a route that another has walked.  Why is this? Parkinson's Disease has robbed me of some of my walking powers, and I can no longer walk the distances that I used to. A walking route of 83 miles and several thousand feet of ascent as it rises and falls over mountainous land is more than I can achieve. True, I am going to have treatment, but as my neurologist has said my walking is a complex problem, I am realistic about my hopes. So who is taking the baton?

Enter Matthew, my youngest son. He is thirty one, while I am seventy one. He is an athlete used to doing half-marathons, and he completed the Manchester marathon this year in four hours and twenty nine minutes, not bad when you think that he had only just recovered from a foot injury. Last year he walked the West Highland Way in Scotland. In this article I am integrating my knowledge of the area with his insights communicated on the journey.

The mantra is start early. Sixteen miles a day of relentless walking over five days  takes hours. So to get an early start Matthew stayed with my daughter on the island of Anglesey the night ere the walk began. Her five year old son was delighted to have a much loved uncle staying with them. Then in the morning she gave him a lift across the bridge to the mainland and found the starting point at Penrhyn. The walk had begun. The weather was wet and windy for most of the day. Not an easy walk, and determination was tested.

Penrhyn [Welsh for headland] was a port from which slate was shipped. It was home to quarry owner, Lord Penrhyn, a not so good guy who combined quarry ownership with large, slave-worked plantations in the West Indies. His successors were no better than he, but without their story the history of social and economic oppression cannot be fully told.

The journey continued along flat coastal roads heading for the village of Llanberis [pronounced Clanberis, a llan being a Celtic monk's cell.] The village is the place from which ascents of Snowdon, Wales' highest mountain, begin, and the Snowdon Mountain Railway, a narrow gauge line, begins its ascending  course there. The village has  the National Slate Museum and some nice shops, including a mead maker, from whom my daughter got my Christmas present one year. Get me cheese or alcohol and you won't go wrong! On reaching Llanberis, fourteen miles later [delayed by weather] he faced a choice,   another four miles to the camp site and the possibility of erecting a tent in darkening conditions and wind and rain  or taking up Helen's offer of a night at her house and a lift back to Llanberis next day to carry on from where he left off, he chose to accept.

He was travelling light now, because the camping nights were over and he  was staying in guest houses, so he had left his tent at Helen's. As a marathon runner twenty miles was well within capacity.

Navigation was now easy. Walk uphill for a few miles, go downhill then turn along the main road, then carry on walking for a while. You walk up Llanberis Pass, a place world-famous for its challenging rock climbing grounds. To your left [east] stands the rock-strewn slopes of the Glydyrs [ a name denoting clutter in recognition of its rocky surface.] To the right is the Snowdon Range, where Wales' highest mountain stands regally among other peaks, like a queen among her courtiers. At the summit of the Pass, Pen y Pass [literally Height of the Pass] there is a restaurant where Matthew got a snack. Then he set off downhill, hoping to make good time in what were better weather conditions, heading for Beddgelert [Gelert's grave, a legendary hound wrongly slain by his master.]

It was twenty miles to walk. Past Waunfawr, with its narrow gauge railway, privately owned by the world's oldest railway company he walked, and he did not stop at scenic Nantlle with its  hiking grounds on the Nantlle [pronounced Nantcle] Ridge above the village [nant means a stream.] Waunfawr is the site of a quarry owner's home and Nantcle where an old slate quarry is situated.

If you see mawr or fawr in a Welsh name it means large or big, fawr being a mutated form of mawr. Mutation of initial sounds in feminine nouns is a characteristic of Celtic languages.

Matthew managed to reach the guest house after twenty miles of tough walking. He got a room with a bath, ate some of his supplies [it only offered breakfast] went to the bar then retired for an early night, intending to eat the largest possible breakfast the following day.

Next day he phoned his mother at noon. Nine miles out of a scheduled fourteen, but it had been tough going with much ascent. He had visited Croesor [name derived from croeso, pronounced creesoh, meaning welcome, a village built to house quarrymen and their families in short-lived quarries in the nineteenth century.] He also visited Tan y Grisiau [pronounced tan ur grisee igh, meaning below the steps, in recognition of the step-like character of the rock strata on the slopes above the village.] The hardest  part of the day was done, all that remained was to reach Llan Ffestiniog [St Ffestiniog's Cell, of which no traces remain in the modern village.] Single f in Welsh is pronounced v; soft f is denoted in writing by ff.] There he stayed in an inn named The Penguin, which sold good food. The end of a tiring day.

The plan was to walk the difficult terrain that leads up to Betws y Coed [ pronounced betus uh courd, prayer house in the wood, a reference to a now vanished monastic site.] He would follow this by  walking through the lovely woodland by the Afon Llugwy,[afon means river] and then taking footpaths with mountain views as he walked to Llyn [lake] Ogwen. After that he would take the final stretch to Bethesda, a town that developed around a slate quarry and a chapel with a biblical name. It didn't happen.

An accident occurred. The first intimations of his safety concerns came when he posted   a selfie and told us that he was he only walker on a large stretch of mountain terrain; and he had already lost his phone charger, which meant that if an accident befell he had no safety line; and then he got injured. Crossing a stream on a remote stretch he fell as he twisted an ankle on a stone,   and he hit his knee on a rock. The knee was worse than the ankle, being swollen and slightly cut. Twenty three miles to walk with an injured leg was impossible. He had no choice but to abort the walk. The path he    was on was not far from a road, so he hobbled back towards the village and flagged down a bus. The driver was helpful, putting him off near a bus stop where he could pick up a bus to Bangor, where he was to catch the train home. He was also assisted by the guest house owner who had found his phone charger, and who kindly agreed to post it to him. Matthew arrived home exhausted that evening, having been collected from  a tram station by his fiancee. He was fortunate to be on a two week vacation from work, so he could rest his injured leg.

Lessons learnt. Hiking alone has its risks, and Welsh mountains in October are risky and demanding places. But Matthew is not a man to be beaten. He is returning next year to complete the route. We will talk about that tomorrow when he comes round to see us.  Llwybr Llechi Eryri [ pronounced cloiber clechi eerie, literally Footpath Slate Snowdon, in Welsh adjectives follow the noun] remains an unfinished task.

Thanks, I will pass on your compliment. He is going to do the part that he missed next year.

My cheese preferences are soft and medium, blue; and I love goat's cheese. I prefer dry white wine and mead. But other drinks are appreciated.

frankbeswick, Thank you for product lines, pretty pictures and practical information.
All the photos by your son are compelling, especially the one captioned Fast Water.

Is it any alcohol and cheese from Llanberis or is there a hierarchy of preferences within what you appreciate?

An article, on the resiliency of street-planted trees, in the October 2021 Arborist News includes the proverb, perhaps most recently loved in The Second Best Marigold Hotel, about planting trees under whose shade the planter never will be. Your generous share with your son about hiking successfully makes me think of that proverb: you perhaps may not (I hope that is not the case since I so love your and your little sister's respective articles on your peregrinations) do that hike again but your son will.

Has he the same passion for walking as you? 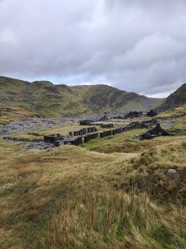 Back to the Slate Trail8 days ago

Coming to London? Why not visit the Thames foreshore and discover the fragments of past lives that this great London river leaves behind each time the tide is out. It's addictive!
100%  17   9 frankbeswick
United Kingdom of Great Britain and Northern Ireland