The Story of Wensleydale

Wensleydale is a delicious, traditional British cheese whose origin goes back to the Middle Ages.

We know that Wensleydale is a historic cheese, made for many centuries by the loving hands of craftswomen, for cheese was traditionally made by women. It was also made by monks of Jervaux Abbey, which was sited on the limestone hills of the area that we call the Yorkshire Dales. It is a medium creamy and delightful cheese originally made with ewes' milk, but now with cows'. How the recipe survived is recounted herein.

Picture courtesy of pooch_eire, of Pixabay

Imagine the scene. The date is 1536 and the white-robed abbot speaks to the assembled valley folk. King Henry has looted the abbey of its wealth and evicted the monks, so the young abbot has no farewell gift for his tearful people. All he has left in the world is a recipe. He gives it to the  valley folk facing impoverishment for loss of the work that the abbey provides. Then he bids them farewell and walks off, later to reluctantly join the Northern rebellion known as the Pilgrimage of Grace. For thus defying Henry Abbot Adam Sedbergh [Sedbar] was to be executed at Tyburn in London in 1537 by the gruesome method of being hung, drawn and quartered, a method too barbaric to describe on a family site.

This is the legend of Wensleydale. The scene is the product of my imagination; the legend is not. What truth lies in it cannot be ascertained, but oral history states that the departing monks gave the valley folk the recipe for Wensleydale cheese. The monks were Cistercians, an austere branch of the Benedictines who sought lonely places for their monasteries, like the valleys of Northern England, where they practised farming of sheep and cattle. The monks, who originally came from France, made a cheese of ewe's milk, which was popular and made them good profit. They made one change, moving from sheep's milk to cows'. This was because sheep only yield milk eight months a year, while the cheese business required the year round milk production that only cows could provide. Not that the valley folk could not make cheese already, they could, but they took over the monks' recipe and made their cheese in their own dairies and kitchens. And so they profited.

But by the later years of the nineteenth century things were becoming more difficult.  International  trade saw factory-produced cheese from America undercutting the craft cheeses made in British dairies. Moreover, cheap cheeses from Britain's imperial possessions, such as New Zealand, burst onto the market worsening the undercutting. Globalisation did no good at all for craft producers and traditional products.

War worsened matters, because under the appalling pressures of food shortages government standardised cheese production to a limited range of cheeses, the best known of which was known as government cheddar. After the Second World War supermarkets proved to be a force for standardisation, and production of local cheeses produced in small creameries declined. When I was a child in the 1950s I had only ever known cheddar cheese, which is not surprising, as rationing of cheese continued to1954; but I remember the day when my mother managed  to get some Cheshire cheese! It was a novelty to me, and a delight.

However, the fightback by lovers of traditional, craft and farmhouse cheese lovers had already begun, and one name stands out, Kit Calvert and the Hawes creamery at the head of Wensleydale in North Yorkshire.

Kit Calvert is the hero of Wensleydale. In 1931, aged 28,he inherited some money and bought a small farm at Hawes, at the head of Wensleydale and began to sell milk to the Hawes creamery that was in a onetime mill. But luck, if you call it that, intervened. In 1932 the Hawes creamery filed for bankruptcy, leaving the Wensleydale farmers with the possibility of having no outlet for their milk. Kit banded with five other farmers and agreed with the creamery's biggest creditor to borrow the creamery. He was buying time. Here is where luck again was on his side, because shortly after he established this system the arrival of motor transport brought the market for liquid milk to the valley. Kit was convinced that had this arrived earlier the cheese would have died out.

But the situation was not easy, for one gallon of milk makes one pound of cheese. At that time Wensleydale cheese was costing five pence a gallon to make, but only retailing at three pence a pound. The economics were not right. The consortium were considering giving up, but one farmer had heard of a new government initiative, the establishment of the Milk Marketing Board, which would buy farmers' milk at a fair price, so the consortium  agreed to hang on.  By 1933 sales had picked up and the consortium running the creamery decided to  step down and the creamery reverted to its original owner, who could not make a success of it. There were other creameries at the western end of the valley providing competition, but they  were not secure either. What was Kit to do?

On going to the town square he met a man from the Milk Marketing Board who was offering  farmers contracts for liquid milk, telling them that it was the only option. Kit told them to wait before they signed and sought finance from significant local figures, including the manager of the local hotel. In a day Kit managed to set up a new commercial operation,  which paid off what the consortium owed to the creamery and ensured continued production of the  historic cheese in Wensleydale.

The next problem was the war, when the government banned many cheeses for the duration. Their reason was that crumbly cheeses, such as Wensleydale, were not easily divided up in a rationing system. The Wensleydale consortium arranged a meeting with the ministry of food and agreed to make a non-crumbly cheese for wartime. Wartime arrangements also included distributing cheese storage around the dale [valley] to ensure that it would not be destroyed by a single bomb. This proved prescient as a bomb fell near to a creamery at the Western end of the dale.

Production temporarily ceased in 1944 when women and children were evacuated from the South of England to avoid attacks by the VI flying bomb. At this time the liquid milk was requisitioned for use by the  evacuees. Production began again when in 1945 the Allies destroyed the V1 launching sites.

By 1954 production had moved from the old mill to a purpose-built creamery. Things were looking good.

Saved by a Cartoon

Two threats emerged in later years, after Kit's death. In 1992 Dairy Crest, who owned the creamery, moved production to Lancashire. Those who know England know that the counties of Lancashire and Yorkshire have a rivalry that dates back to the Wars of the Roses in the fifteenth century, when the dukes of Lancaster and York fought viciously for the throne. Now the rivalry is sporting, but there is an identity difference between the two counties. The transfer wounded Yorkshire pride and generated a fightback, a consortium including the management bought out the creamery and returned cheese making to Wensleydale.

But in1995 sales were not brilliant when a cartoonist accidentally helped out. Wallace and Grommit is a children's cartoon about an affable, harmless, northern Englishman and his good natured dog. Wallace [who speaks with a central Lancashire accent] loves cheese. In one episode Wallace says that his favourite cheese is Wensleydale. The writer of the cartoon was unaware that Wensleydale cheese production was under threat, but he gave the cheese massive publicity on television. Children started asking their mothers to give them Wensleydale in their lunch boxes. When they got it they liked it. Sales soared and stayed up.

The  creamery is now secure. It produces three types of Wensleydale: the white variety pictured above; a smoked variety, which I have yet to taste; and a variety containing cranberries, which accounts for a quarter of all sales. You can see this in the picture above. The company has a visitors' centre  attached to the creamery, which draws 25000 paying visitors a year, boosting revenue greatly. The cheese has benefited from the revival of local craft cheese production in Britain and Ireland, which is part of the movement for non-industrialised food production. It is one cheese among many, albeit a great one. I really like it on a toasted ham and cheese sandwich!

As Wensleydale is limestone country bogs are not common there, but in the Cheviots on the Scottish border there are many bogs.

It is made at Beechmount Farm, which covers 200 acres in the Golden Vale, which is an area of fine dairy country in Tipperary.

Cashal Blue is a big favourite of ours. I think it is from County Tipperary.

I once chewed on an Irish cheese, Kerry Farm, that was too hard. It is not now listed with Irish cheeses, so I infer that it has gone out of production. For Irish cheese, choose Cashel Blue. I have never tasted Cornish Yarg.

I love most cheeses . I can 't think of any i do not like except perhaps Cornish Yarg which matures wrapped in nettle leaves.

I thought that you might mention Dad's love of cheese.

I like my cheese medium or soft consistency and creamy. I am not very fond of hard cheeses, though I can take Cheddar. I love goat's cheese, and I am also a lover of Feta, which is made with ewe's milk.

Wensleydale is a protected designation of origin, so it can only be made in Wensleydale. Therefore to be available in the USA it would have to be imported.

The pure white cheese is the nearest, but there are suggestions that the original cheese was blue. Blue Wensleydale is occasionally made nowadays. Farmhouse Wensleydale, which was brine-washed, is now extinct.

Though Cheshire cheese is not mentioned in the Domesday Book, in the early Middle Ages it seems to have been well-established, but it was made in Cheshire, Shropshire. Flint, Denbighshire and Montgomeryshire. I suspect that as Roman legionaries had cheese in their rations, and as Chester was a legionary base, making Cheshire cheese in that region might go back as far as the Romans. For non-British readers Chester is the county town of Cheshire. 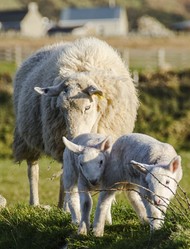