Pure white and Ivory coloured dresses are also popular in India, just like their popularity around the world. However, when it comes to an Indian marriage, pure white is never chosen for the bride unless it is a Christian marriage. This is especially true for a Hindu wedding, although white also means being pure and divine. Ivory colour and other lighter shades are not forbidden like white. Many times, bridal wears made of lighter colours are paired with other bright colours like red or orange and also embroidered with golden coloured designs and sequins and other stoneworks and also mirrored beads. The most popular colour combination for Ivory coloured wedding dresses are red coloured borders and golden coloured embroidery works, sometimes they also come with golden coloured borders. Light coloured bridal wears are mostly chosen for engagements and wedding receptions.

White lehenga style saris are great for Christian wedding receptions and parties. They are also chosen by the bridesmaids in Christian weddings so as to match the white coloured gown or sari of the bride. Ivory coloured lehengas and saris are actually more popular among the Hindus, when they are combined with colourful borders and other embroidery works. Golden embroidery works look great in ivory coloured wedding dresses and white coloured beads go great with pure white coloured dresses. A lehenga style sari in these colours look really stunning, especially for the evening parties. Light brown shades are yet another way to use a lighter shade of wedding dress, when you want something different from the regular white ones but not just lighter shades of more common colours like pink and orange.

Here you can see some of the beautiful lehenga style saris in light colours, which are available to buy from Amazon US.

If you are a reader from India, click here to see the beautiful light coloured bridal lehenga available to buy from Amazon India

The lehenga style dress that you see here has a light wheat brown colour, but it comes with a colourful maroon shawl. It is made of net fabric and has lots of floral embroidery works, stone works and bead works all over the garment. It comes unstitched. I love the unique, but attractive colour of this lehenga style sari which definitely appears to be a great bridal wear for wedding receptions, engagements and other parties.

Here is another lehenga style sari in green and white which looks simply stunning. You can see more light coloured bridal dresses as you scroll down.

The skirt of the lehenga is white and the top is bright green and the colour contrast works really great for this garment. The shawl is carmine red and the white coloured full skirt also has red coloured border and beautiful floral designs. All the three pieces in the garment are further decorated with gold coloured sequins, beads and other embroidery works. This beautiful dress which will look great for wedding receptions and parties is made of net fabric and it comes unstitched.

Beautiful In Beige And Similar Shades

Beige colour symbolizes simplicity, elegance and most importantly loyalty, which makes it a very good choice as a bridal wear. Even those who insists on wearing bright coloured dress during the time of the marriage ceremony can choose beige coloured garments for their wedding reception.

Beige colour and shades of beige along with golden or silver embroideries can look great and elegant and definitely loved by those who prefer lighter shades. Even if red is liked by many, there can be many brides who prefer lighter shades for their weddings or reception parties, but don't want to go for the white or ivory colour. Lighter shades of brown and beige colour works great in such cases. Just like the case of other brighter colours, these garments look luxurious, rich and elegant, yet simple. The best thing about these colours is that while it is still rich and elegant, they also displays more simplicity. The dresses displayed here are rich with works of stones, beads and mirrors along with embroidery works using golden and silver coloured threads.

The beautiful garments that you see on the right side are beige coloured. The dress on top right is made of georgette fabric. The other beautiful lehenga in beige colour is made of the fabric crepe. Both the dresses are rich with embroidery works in Indian ethnic designs.

The garment that you see below is made of dupion silk.  Silk definitely has great importance in Indian weddings. In fact wearing silk is considered to be the best in Hindu marriages.  So silk dresses are preferred for marriages in many families and so a lehenga style sari with lots of embroideries in silk is the best for those who prefer it. This garment comes unstitched.

Ivory colour symbolises purity and simplicity, just like the white colour but it is more popular for weddings when combined with other brighter colours, as it also stands for prosperity and elegance. It is also perceived as a more pleasant colour with a more rich look.

You can see below a beautiful lehenga sari in off white with maroon border and golden coloured threadworks and sequins which perfectly match together. The colour combination is so pretty and the dress also comes with a net jacket along with a net shawl.

Golden colour symbolises prosperity, wealth and good health. It also shows royalty. So a golden coloured dress for the bride is very much suitable for a wedding ceremony, wedding reception or engagements!

The golden coloured lehenga saris are great choices for those who prefer light coloured wedding dress, yet don't want to compromise on the rich look. Golden coloured silk saris and lehengas are very popular as wedding dresses in India as they really give the bride the royal look on her wedding day. In addition to the golden coloured thread works, these garments also come with lots of stone works, bead works and mirror works very often. It is actually the ethnic designs, embroidery works and other works that you see in Indian wedding dresses make them so unique and special. The popularity of red is a fact, but these lighter shades are nonetheless when it comes to the luxurious look.

The Symbolism Of White And Ivory Colours In India

White is considered sacred, pure and divine. According to the Hindu beliefs, white is generally considered as a maiden colour and  it is not considered as a suitable choice for a bridal dress during the marriage ceremony.

Across India, white is also usually used for mourning among Hindus and Muslims and also for performing funeral ceremonies. This might be due to its symbolisation of  being pure, as a colour that is thought to symbolise the end of desires, passions and  feelings that tie us to the relations and our own existence in this world. As you can see, red is the colour that symbolise passions, desires, strength and life itself, which is why it is popular for marriages.

If you intend to purchase any of the above shown dresses, please go through the product description and specifications carefully, since many of these come unstitched and you may need to request for a customized stitching.

Thank you EmmaSRose for stopping by!

VioletteRose, Wedding dresses offer a spectacular canvas for the timeless artistry of beadwork.

It is interesting colours have different symbolism in different cultures, yet they all have some underlying similarities too. I am waiting to read your articles on these :)

I really am going to have to find time this weekend to start work on the article I am being asked to write (by Jo) about color symbolism. Your articles are giving me yet more ideas. I honestly think it might end up being a series. Oh well. Such is life, and I've researched less interesting things, that's for sure.

Hi WordChazer, I too love the wheat brown lehenga, it has such an elegance! I really didn't know about the importance of gold and red colours among Christians. Thanks for telling that to me :)

I have to see how Christians in India choose from pure white and ivory coloured wedding dresses, I think that may be a more personal choice today as I have seen both. In Hinduism, white is not chosen for marriage while ivory, gold, beige etc. are fine. After all, everything is a personal choice, so there may be differences. Your wedding dress must be looking great, I love the idea of blue silk with lots of colourful flowers and gold glitters.

I am really glad you enjoyed the articles, thanks so much :)

The wheat brown lehanga is beautiful!

The ivory lehenga is also stunning. To my eyes, it would be the kind of dress an older bride would wear, maybe a widow remarrying (such as my ex-boss chose to wear at the age of 50+ when her two adult daughters stood as her matrons of honor for her second marriage).

I don't know whether Indian tradition has the same idea, but often an older woman will wear a wedding dress which is ivory, beige, cream, gold or at least a variation on white, leaving white for the youngsters (and those who want to look like a cake decoration, says she with a wry face.) My wedding dress is also my formal wear, a white chiffon shift dress with small purple, blue, pink and orange flowers and gold glitter, lined in pale blue silk, so it looks pale blue in hue. A deep purple jacket, handbag and sandals complete the outfit. And I can still - just about - wear it now. It's had a couple of outings since the big day (7 years this year) and hopefully will have some more as it's pretty timeless.

I'm really enjoying this series of articles on bridal saris and lehangas, Violette. Please do write more about the traditional colors for marriage in India. 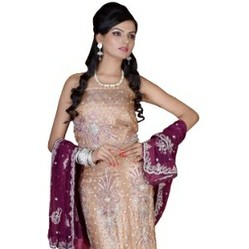 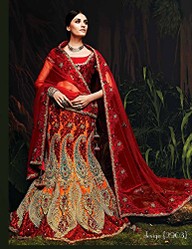 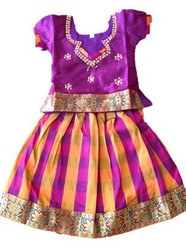 Indian party wear kids dresses like lehengas for little girls are available to buy online from Amazon.com if you live in the US. See the most pretty Indian outfits for girls here.
Loading ...
Error!