The highest peaks in each of England,Scotland and Wales are a physical challenge that some people love to accept.

The journey can start at either end, Wales or Scotland. But let us assume that you begin at Snowdon,Wale' highest summit. You then drive a hundred and fifty miles to Scafell Pike, England's largest mountain, and then you drive the three hundred miles along Scottish roads until you reach the climax of Scotland's and Britain's largest summit, Ben Nevis, with its four thousand, four hundred and fourteen feet of often misty mountain ahead of you.

The image above, courtesy of Sea Clouds, shows Barmouth, where the yachts set off.

I am an Amazon associate and earn from qualifying purchases on this page.

Strong,physically fit younger people like to do the three in twenty four hours or less, challenging themselves for time. But this requires team work. You need to have those who ascend to the summit  and those who support them, taking on the onerous burden of driving. I offered to drive for my rather fit second son,one who feels able to try a triathlon, but he pointed out that the job is too much now for one in his sixties, and I had to accept that he was right. He was concerned that the road to Ben Nevis takes you across the wilds of Rannoch Moor, one of the loneliest roads in Britain, a place in which driving requires serious concentration, especially when it is dark and wet. I have driven the road a few times and know what to expect,but now I need more breaks than the pressurized driving of that challenge demands. Time to take a back seat. His route is planned for next year, 2018, having been delayed by work commitments.

There are two main ways of doing this, by road and by yacht,the latter of which is the route taken in the Three Peaks Yacht Race, held every year in honour of the explorer and adventurer Bill Tillman. Tillman made seven expeditions, and then was tempted back for one last time on a mission to ascend yet unclimbed peaks in Antarctica. Never say one last time, for it  was his last. His ship disappeared and he has long been presumed dead. The race, which has several trophies attached, was set up in his honour.

The yacht race begins at Barmouth in Central Wales, in honour of Bill Tillman,whose home was there, where the yachts sail to Caernarvon,in North Wales. Teams are divided into sailors, all of whom are racing yachts-folk, and fell [hill] runners. A race up the three  thousand five hundred foot Snowdon  [Yr Wyddfa]  begins at Caernarvon. There are several routes up Snowden,  but the runners take the Llanberis route, which requires no scrambling and whose access is nearest of all the routes to the sea, though it still is a journey of several miles to begin the route. They ascend the path past the mountain railway station half way point, passing the daunting crags of Clogwyn D'ur Arddu  [the Dark Precipice] famous among rock climbers for its challenging routes, but they have little time to look. Eventually they take the path along the side of the great cliffs that look towards the Welsh inland and reach the summit. No time to stop at the summit cafe, just turn round and come down the way they came. Then quickly to the yacht where they eat, rest and let the sailors take over for the trip to Whitehaven in Cumbria.

Of course, there is the non-race route, where you drive from one peak to the other, but that needs a driving team to take the strain, as you journey north along the crowded motorways and main roads of North West England and Wales, until you wind through Cumbria and reach the route to Scafell Pike.

Scafell Pike, not to be confused with its slightly smaller neighbour Scafell, is at the centre of the Lake District in Cumbria. Walkers can ascend it via routes from Borrowdale, Langdale and Wasdale in the West. I have ascended via Borrowdale and Wastdale, but those who want the twenty four hour event, or take part  in the yacht race, take the Wastdale route, which is close to the port of Whitehaven,where the yachts dock in the second stage of the race.

As the length of the journey is quite long, runners switch to cycles, and they race from Whitehaven to  Black Sail Pass,near Buttermere, where they deposit their cycles and race up over the hills to Wasdale Head, where they begin the beautiful route up Scafell Pike. Then they return by the route by which they came.

The non-racers who drive up can take any route, but the way up through Wasdale is the quickest. Having taken the motorway through North West England they  turn off to skirt the coast north of the scenic Morecambe Bay and then drive north, but they do not need to reach Whitehaven. The Drive takes them to Wasdale Head, at the head of  Wasdale, passing the grand scree slopes that flank Wastdale Lake.

The ascent takes you up to the smaller companion summit of Lingmel, and then over Lingmel Col, a col being the dip between two summits, and thence to the rocky summit of Scafell Pike, England's highest point.From there you can see the panorama of Cumbrian Peaks. On a good, clear day you can see the Isle of Man, not far away in the Irish Sea,Southern Scotland and over the sea the misty shape of distant Northern Ireland.

I have done Ben Nevis twice, the latter time with my second son, who went with Scouts. He was just a little too young to go on that trip, but got permission as long as I accompanied him. So naturally I could not say no to a mountain walk. On route to the Ben I got the closest view of a buzzard that I have ever had. We were rewarded by a rare event on the Ben, whose name means cloudy mountain, a clear day. The view across the undulating waves of Scottish peaks was magnificent. Peter, aged ten, kept up with the rest of the Scouts, but was worn out and I held his hand for the last legs  of the journey. But I was proud of him.

The yachts, having taken the island-studded sea passage past the isle of Islay and through the Western Isles of Scotland, with the runners sleeping in the cabins,  come towards the broad Loch Linnhe, making for the harbour at Fort William. On route they sweep past the entrance to Loch Leven, which gives access to the tragic Glencoe, scene of the massacre centuries ago, and then they pass  through the narrows at which Loch Linnhe becomes a bottleneck. It is here that the skipper needs some skill, for the current through the narrows at times can be five knots, and no engine is allowed on the race, for it is all done by sail.

The runners are dropped off and the boats made ready. Then the athletes head for Ben Nevis. Walkers have a choice of routes, but the quickest, the one that can be done without scrambling, is the tourist path. This towards the summit is a zigzag between markers and is perfectly safe, as long as you do not stray from the path. But stray at your peril, for on one side the land begin to steepen as it approaches Five Fingered Gully, a deadly place a fall in which is inevitably fatal. This is why you should not do this path at night.

The difficulty for the walkers is the long drive from Northern England, which part of the way takes you across Rannoch Moor, a wilderness landscape of challenging ground, a place where safe driving is essential. I have driven the moor and passed along an undulating road between lochans [small lakes] and rocky, heather covered terrain,in a landscape where few humans live. As I drove in the early morning I passed through dips in the road where mist accumulated and you were aware of how isolated you are. I am more nervous of the drive than I am of the mountain. However, the driver's aim is to get to the Ben by four in the morning, to start early so as to take advantage of Scotland's long hours of summer sunlight. Up the Ben early and down before dark, that is the ideal!

The race consists of 389 miles of sailing, 18 miles of cycling and seventy two miles of fell running, which consists of nearly three marathons in a short time. The teams on the official race are regulated at three sailors and two runners,and there is a maximum of twenty five entries. But anyone can try the route privately

The time taken can vary between three days fourteen hours and five and a half days, with sailing  taking much of the time. A good start from Barmouth gives an advantage, as catching the tidal flow that sluices speedily through the narrow Menai Straits between Wales and Anglesey gives a great advantage,though you must navigate safely between the two huge bridges that span the Straits.I have been in a fishing boat in the Menai Straits, and believe me the speed of the current is impressive! You also need to beware being stranded on the expansive Lafan Sands that mark the north end of the Straits, which could hold you back some time, so a knowledge of the sea channels is important.Then the route up to Whitehaven is straightforward, though you must avoid ships going into Liverpool.

Beyond this the sailing challenge involves navigating the difficult waters of the Western Isles, sometimes known as the Inner Hebrides.You need to respect these waters, they are often rough with fast tidal streams that sluice through narrow channels, and the route at any times is not for weak and/or inexperienced sailors. It needs a well-experienced skipper with a good crew.

I have done all three mountains more than once each,but never together; and I have  a great respect for the athletes who have attempted or completed it. .

Thanks for any other great post. I've not done these wonderful climbs although I have already been in those stunning areas.

I don't know the answer to this question for certain, but one team did the round trip up Scafell Pike and back to the yacht in seven hours sixteen minutes

I have never been to Albania, but the rock of which Scafell Pike is composed is volcanic, as is the whole centre of the English Lake District.

frankbeswick, The Scafell Peak looks a lot like ancient, barren, rocky Albania! What is the shortest amount of time on record for climbing as part of driving and sailing competitions?

If you want to do Snowdon, take the route from Llanberis, as it is the easy way. The shortest is via Pen y Pass, but this route is quite steep and car parking is scarce.

I have not done these wonderful climbs although I have been in those stunning areas. 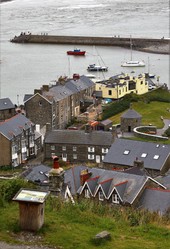