The Travelling Woolen Soldiers of WWl

It took 500 knitters to knit the 800 soldiers of this exhibition mounted to coincide with the centenary of World War l. Not everyone has a chance to see it, but if you can, do so.

It's difficult to describe the effect of seeing a long line of miniature knitted soldiers of all nationalities stretching 12 metres on a long counter at the France Pavilion at the World Travel Market in London this week in November, 1915. The tiny soldiers seemed to point up the fact that the men were just playthings for the Gods, in that war to end all wars.

Visitors to the World Travel Market in London this week, have been privileged to see the Exhibition of this Woollen Army by the artist Délit Maille, who works in Northern France, scene of some of the bloodiest fighting during the First World War.   It is no coincidence that the miniature marching army is made of wool, for wool production was the mainstay of the war economy during the period 1914-1918 for clothing and equipment for the combatants and it is still central to the economy of some of the countries who fought during that war.

Five hundred knitters from all over the world combined with the artist Délit Maille, to produce nearly 800 woollen soldiers of several nationalities, knitted in tribute to the millions who fought in the First World War.   It evolved from a Facebook appeal for volunteer knitters which had an instant response. The volunteers then received a package containing a ball of wool and precise instructions as to how to go about knitting their contribution, cardigans, hats, haversacks, boots, bags etc., after which groups of knitters met to assemble the items and give life to the little army they were creating.

It was felt that not only was the army an echo of the mixed bag of combatants thrown together by the war, but this meeting of knitters seemed somewhat akin to the evenings during the war years when women would meet together to knit ‘comforts’ for the soldiers serving far from home.

Exhibition first presented in Paris, part of The Farewell to Arms season

This Exhibition of The Woollen Army was previewed at the Musée de la Piscine de Roubaix in December 2014 (until April 2015) as part of The Farewell to Arms season dedicated to the centenary of the First World War, and was also seen in Paris in September 2015 during the European Heritage Days at the Grand Palais.  The aim is to show the army in as many different contexts as possible.

It is the first time that the Woollen Army Exhibition has been shown in the UK, and France (and Normandy Tourism) is to be congratulated for the wonderful display of these woolen soldiers on the WWl stand at the World Travel Market.  Although we cannot see all 800 of these woollen dolls due to space restrictions, there are 600 on view over a length of 12 metres.  These 600 woollen soldiers have been set up as though in a long march past, through the stands of the French Pavilion.

Look Out for this Exhibition

It is to be hoped that this exhibition will go on elsewhere.  It seems a shame that only the attendees at the World Travel Market will have a chance to see this.  If it comes to an area near you, please do visit.  There is something quite magical about it.

lovely photos. I love those Scots !

No, they could be touched. No children there, of course, which made it easier.

was there any protective glass around them ?

I wish I could have squatted down on the floor to take a direct picture but unfortunately, age and a very bad back denies me this type of photography. I hope my pictures managed to convey a bit of what they are like.

Magnificent. I didn't know about these. How sad they are so far away. 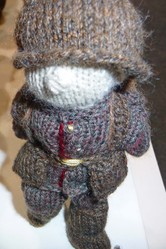